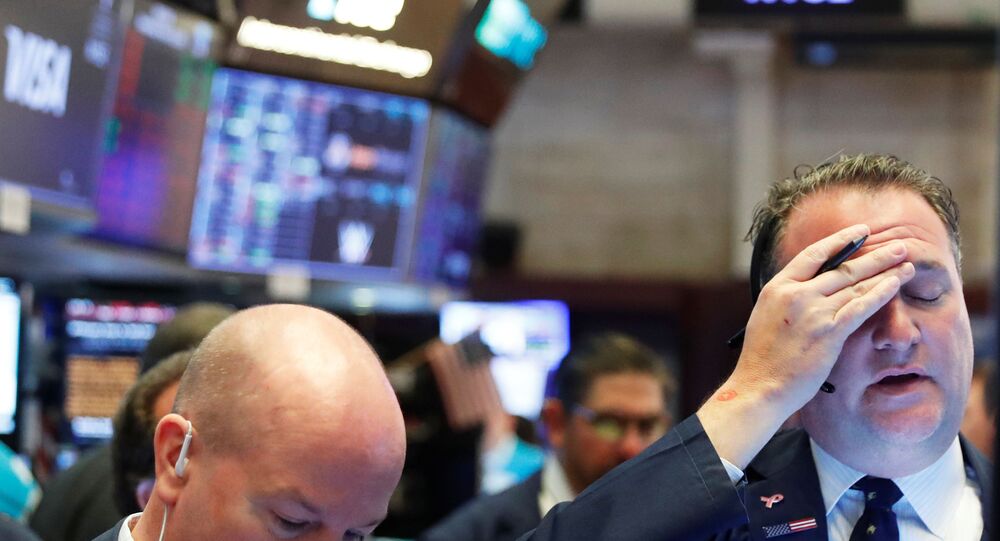 COVID-19 to Have as Big an Impact on Physical, Productive Capability of Economy as World War - Prof

Global markets have experienced considerable fluctuations lately as the coronavirus that originated in Wuhan, China in December started spreading around the globe, infecting an increasing number of people.

Steve Keen, a UK-based, crowdfunded Professor of Economics on Patreon, believes that those in power have treated the virus as trivial, which led to the exacerbation of the economic situation in the world.

Sputnik: US stock markets have tumbled in the past month, with many investors urging President Trump to close the stock market while the shutdown continues. What could be the repercussions of such an action?

Steve Keen: Well, all that would do is leave prices at their current level. And that means that whatever people value their stocks at, in their calculations of their net financial wealth, assets minus liabilities, would remain constant so that people would not be forced into bankruptcy by a fall in the value of their share market holdings. And that's the basic idea of it. However, if you do that and you haven't got anything in place when you open the market, then the day you open the market, it could fall 20, 40, 50 percent.

So I don't believe it's enough of a solution. It is necessary to stop the coronavirus from causing a financial collapse by the impact of the fall in the value of shares and fall in the value of property. But shutting the market on its own is not the right way to go about it.

Sputnik: US stock markets were closed in the days after 9/11 and for 4 months in 1914, when World War One broke out. Are we looking at a similarly difficult financial situation now?

Steve Keen: I think we're looking at a worse one; 9/11, you know, was a blip in historical events; it caused a large cascade of other events coming out of it, but the impact of 9/11 was trivial. You lost three buildings; you didn't lose the productive capacity of China. That's a comparison of a scale of magnitude in terms of the impact on the physical economy of 9/11 till today.

Now, 1914 is a better choice because that was a world war. And frankly, the coronavirus will have as big an impact on the physical, productive capability of the economy as a world war. We really have to think of it in those terms. And the failure to do so is a major reason why so many countries have gotten themselves into such difficult situations already. They were treating this as trivial. Anybody who knew a reasonable amount about epidemiology understood the impact of a virus, which in this case, can double its infections every four to six days and understood the exponential impact that implies on how fast the cases expand, and how rapidly you could overwhelm the capacity of your emergency services to cope. We knew this was going to cause a crash like this. Another person I can mention on this front is Chris Martinson, who has been warning about this for three months. Eric Townsend has also been warning about it for several months.

So it is not true that this can't have been anticipated. But the people who did anticipate are not in the corridors of power. And therefore, we saw children, fundamentally - people who do not understand exponential processes, making decisions about when we should close various services down, always being late, always doing it too late. And we're now in the state of panic we are in now. So we really have to compare this to the First or Second World War, and we have to have a similar approach to mobilisation in that case. That also means we have to make the stock market secondary to the need of the economy to survive the crisis and come out moderately damaged rather than fundamentally damaged as it will be if we don't take drastic actions.

Sputnik: Donald Trump has been trying to boost the financial markets in the US, to the extent that some politicians are accusing him of overly focusing on the market. How important are markets at this time?

Steve Keen: They're never important in their own right. They are simply, as Keynes describe them a long time ago, a gambling den. And they should never have been given the prominence they've been given in economic and political policy. However, because they're part of a gambling den and people then value their net worth on the basis of the value of the shares they have, then a fall in the value of shares can trigger corporations to go from being solvent to being insolvent.

Most importantly, banks must maintain positive equity. And banks have large shareholdings. So if the share market collapses, the value of banks' assets can fall dramatically, while the value of their liabilities remains constant, meaning they're pushed into negative equity. Now, under conventional rules of accounting, a bank which has negative equity is bankrupt and must be shut down. Now, if that happens, of course, the payments system also collapses and then suddenly people who want to go shopping to buy bread find that they can't go shopping because their bank has gone bankrupt, even though they might be technically solvent, the individuals. Their banking payment system doesn't work anymore. We simply have to stop that from happening. Now, part of that is stopping the share price plunge, but doing it by shutting the share market down or doing it by propping up the value of shares, given who currently owns those shares, neither of those are successful strategies.

Sputnik: You have said that ignoring debt is one of the 'great fallacies of modern economics'. What is the optimal route the US government should take in order to minimise the general impact of this pandemic?

© REUTERS / BRENDAN MCDERMID
US Economy in Free Fall, Could Lose Up to 24% of GDP and Face Ocean of Unemployment Due to COVID-19

Now, in reality, what we need to do is make the financial system far less fragile. And that means reducing the level of private debt across the board. And the best way to go about that is a policy I put forward about one decade ago, which I called a modern debt jubilee. And that would use the government's capacity to create money, which you can do by the combined actions of the central bank and the Treasury, to inject money into the bank accounts of all citizens on an equal per capita basis and enable them to require those who are in debt to pay their debt down, while those who are not in debt get a cash injection, which they could either spend or they could be required to buy shares with it. So it could also reduce corporate debt by requiring corporations and reduce the level of corporate debt. So these strategies I put forward a decade ago to have an impact on the aftermath of the financial crisis could be modified now to reduce the impact of the Coronavirus.

So the government but again, create a large amount of money, inject that money on a per capita basis into people's bank accounts and then enable them to pay their mortgages and pay their rent, buy food and so on, and not starve and be forced into homelessness because of the coronavirus. If we don't do that, then that will happen. People will be forced into homelessness. They will be forced into starvation. And that means, of course, the coronavirus will spread even more effectively. So we have to use that tactic, I call it a modern jubilee now.

We could finance it by selling a massive number of what I call corona bonds. In America's case, they could sell two trillion dollars worth of them. The financial sector would snap them up. They could be priced at zero interest. You wouldn't need to pay any interest because the alternative assets are collapsing in value right now. That money could then be used to give a cash injection of two trillion dollars into the American economy now, to enable people to pay their mortgages, pay their rent, buy food, not starve because they're unemployed as they have to be unemployed right now. And in the aftermath, we would actually have a more democratic economy.