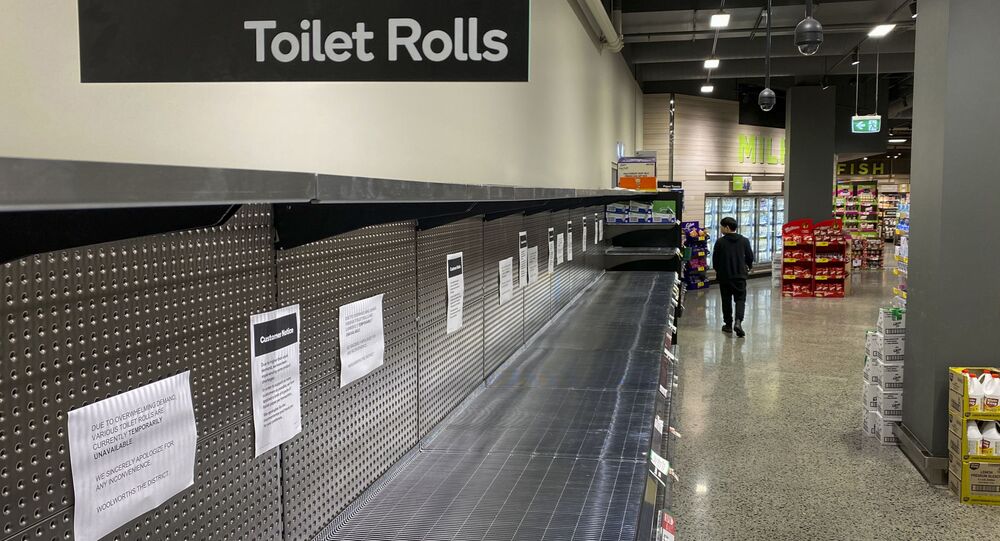 People around the world are feverishly stockpiling toilet paper amid the COVID-19 outbreak. International experts in psychology have attempted to explain why the commodity has unexpectedly turned into a hot item.

The coronavirus outbreak, which is continuing to gain pace around the world, has not only cut off global supply chains, nixed international travel and sent large-cap stock benchmarks low but also wiped out retail shelves with toilet paper being the top selling item.

While the high demand for hand sanitisers, medical face masks, and disinfecting wipes is at least somehow understandable given that the virus is characterised by a runny nose, sore throat, and a cough as initial symptoms, there is no clear explanation for the mysterious disappearance of toilet paper from the shelves in China, Britain, Australia, the US, and elsewhere. Meanwhile, the media say that the recent trend has already forced stores to limit purchases of the much needed item.

The reports of toilet paper shortages have triggered a lot of memes on social media but fell short of answering the question as to what is behind buyers' behaviour.

After ‘Namaste’, use of ‘water’ instead of ‘toilet paper’ is the next thing that western world needs to learn from us. #Corona #ToiletPaperPanic #toiletpapercrisis pic.twitter.com/TVb33Y9efT

​According to Andy Yap, a professor of organisational behaviour at the Singapore campus of the INSEAD business school, COVID-19 "threatens our sense of control, which led to similar patterns of panic buying all over the world". It is "control deprivation" that leads people to look "for some illusory patterns" and force them to feverishly buy toilet paper.

I was laughing at people stockpiling toilet roll.. But now that I actually need to buy some, it's getting a bit beyond a joke. Even the kleenex is all gone. Not happy. pic.twitter.com/Zql9wva7IO

​The professor notes that one should not underestimate the influence of social media with vivid images and videos featuring panic buying of toilet rolls. When one sees those images, one feels the need to engage in the very same behaviour, he explains.

"We did not observe this during SARs because there wasn’t social media back then", Yap believes.

Nadine Kaslow, professor of psychiatry and behavioural services at the Emory Medical School, and chief psychologist of the Grady Health System, agrees that that the panic buying is an understandable response to the coronavirus outbreak as people are feeling that things are out of their control. She warns, however, that there needs to be a balance between appropriate action and "over-reaction" which is buying a year's supply of toilet paper.

Consumer psychologist Dr Paul Harrison echoes Kaslow by saying that while people, particularly those living in developed countries, have long taken for granted effective health systems, security and safety, they are now eyeing nothing short of an "existential crisis" and feeling like they are losing control. As they are yearning for the ability to manage the processes they have resorted to panic buying.

Tan Ern Ser, associate professor of sociology at the National University of Singapore, offers yet another explanation. According to him, toilet paper belongs to one of two basic categories of items – i.e. consumption and personal hygiene – people with established lifestyle habits need in their everyday life.

"I believe the usage of toilet paper can be rather high, and hence they felt the need to stock up or build up a buffer, which would help to reduce anxiety, unless people eventually learn from those who practice using water after they have cleared their bowels, and substitute toilet paper with water, thereby establishing a new social  practice", the professor notes. "In which case, they may turn to panic storage of water, should there be water rationing".

Of course these idiots causing a stampede for toilet-paper at @ALDIAustralia store in Melbourne aren’t worried about their co-stampeders coughing and breathing into their faces. pic.twitter.com/cvwDhyB7Fa

Gordon Asmundson, a psychology professor at the University of Regina, Canada, who has been researching the impacts of fear and anxiety surrounding the COVID-19 pandemic, says that "fear" could be the major reason why many people have become toilet paper hoarders.

"We are all currently faced with a fair degree of threat to our health and a large amount of uncertainty about what needs to be done to stop COVID-19", he says. "The unfortunate thing about fear is that it too is contagious and typically spreads faster than a virus. Fear leads to emotion-based decision making, and we are seeing this in the grocery stores".

The fuss surrounding the global buying spree of toilet paper has created a false sense of urgency, he opines. To illustrate his point the psychology professor notes that much in the same vein people running toward a fire exit don't typically stop to ask why everyone is running.

Debra Grace, consumer psychology professor of Griffith University, Australia, and Baruch Fischhoff, a psychologist and professor of the Institute for Politics and Strategy at Carnegie Mellon University, suggest that the truth of the matter is that there are no substitutes for toilet paper and therefore its shortage has become so conspicuous prompting consumer anxiety.

​"I believe that when news of the virus began to hit the media, there were a small proportion of people who over-reacted and went to the supermarket and stocked up on everything - not just toilet paper", Grace says. "However, as toilet paper packs are quite large, then the sale of say 20 large packs will become very noticeable on the shelves because the shelves will start to look empty".

The first thing shoppers noticed were empty spaces where the toilet paper is sold which they perceived as a pending shortage of toilet paper. They started buying it en masse and the frenzy was further fueled by the media, according to the academics.

"It would be useful to hear assurances that the supply chain problems have been fixed — and that all the needed toilet paper will be in the stores soon, if that is true. Looking at the empty shelves, there is no way to know", Fischhoff presumes.

Neil Greenberg, professor of defence mental health at the Institute of Psychiatry, Psychology and Neuroscience at King's College London and President of the UK Psychological Trauma Society, echoes his fellow academics by saying that the media of course has a role in creating the people's anxiety. As a result, what has always been a sort of a survival instinct blew out of all proportion when people were forced into quarantine, he says.

"It is hard to predict quite what will be needed to be able to successfully navigate a period of quarantine and so some element of toilet paper and pasta buying actually makes sense. What makes less sense is stockpiling above and beyond what is likely to be needed for the period of quarantine", he emphasises urging people "to believe factual information only from trusted sources and not to overly expose yourself to continuous media articles which make you anxious".

Jill Klein, professor of marketing at Melbourne Business School and a Professorial Fellow at the Melbourne Medical School, echoes the Japanese professor, referring to the "social contagion" phenomenon.

To explain her point she offers an example of passengers being tossed around during turbulence: "One of the first things people do is they look at other passengers to see, should I be scared, should I be worried", she says. "And if everybody else is just continuing watching their movies or reading their books, then you decide, oh, there's nothing to be worried about".

However, if other people are looking really scared then one defines the situation as really threatening and difficult, she says, adding that a similar sort of thing is now happening in supermarkets around the world.

"Unfortunately, this causes all kinds of problems", Klein continues. "You know, if you buy 64 rolls of toilet paper and you are only going to need 8 at a certain period of time, that leaves somebody with no toilet paper and that's a problem".

Ridiculous scenes in Tesco Colney Hatch this morning. Shelves cleared like there's been a riot. The selfishness of some people filling their trolleys with multiple packs and leaving none for others is staggering. (Plus so much for getting here early to avoid crowded spaces.) pic.twitter.com/CIhJexaYul

​Kazuya Nakayachi, a professor at the Psychology Department of Doshisha University, Japan, echoes Jill Klein by outlining three major stages of a contagious social behaviour. First, a rumour emerges; second, being uncertain what to do people resort to "conforming behaviour", i.e. taking the same actions of the reference group; third, the rumour snowballs into a real problem, since people buy a larger amount of the commodity than usual.

Meanwhile, supermarkets call upon shoppers to stop buying more than they need as they can leave others without much-needed goods, including hot button items like toilet rolls.