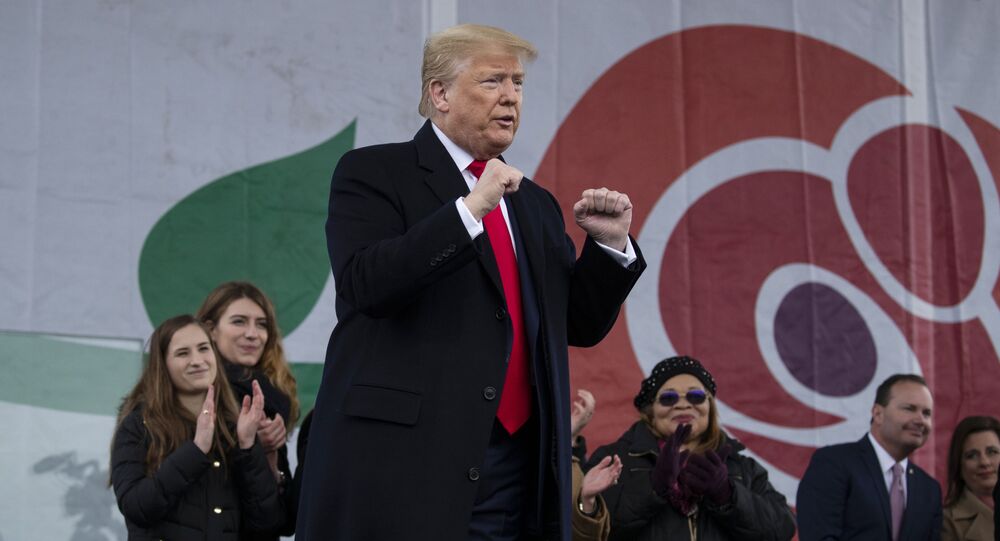 Donald Trump on Friday became the first US president to attend the country’s largest anti-abortion rally, an unsurprising move given his campaign to make “America white again,” according to Jenny Brown, author of “Birth Strike: The Hidden Fight Over Women's Work” and “Without Apology: The Abortion Struggle Now.”

“Sadly, the far left is actively working to erase our God-given rights, shut down faith-based charities, ban religious believers from the public square and silence Americans who believe in the sanctity of life,” Trump said to a crowd of supporters at the March for Life in Washington, DC, the Guardian reported.

“They are coming after me because I am fighting for you and we are fighting for those who have no voice. And we will win because we know how to win,” he said.

According to Brown, Trump’s appearance at the rally - held annually by those who aim to reverse US Supreme Court ruling in Roe v. Wade, which legalized abortion in the country in 1973 - is to be expected, given how he has campaigned and governed. The annual rally is timed to coincide with the day the ruling was handed down: January 23.

“It’s really consistent with his anti-immigrant stance and his various racist sentiments that he expressed over the time he’s been president. We have the lowest birth rate ever in the US right now, and I think that the right wing is considerably worried about that - especially the lower white birth rate - and they would really like to see it increase,” Brown told By Any Means Necessary hosts Jacquie Luqman and Sean Blackmon.

“And of course, rather than taxing the rich to provide childcare or some of the things that we need to raise our kids in a healthy environment, they are looking at more coercion and more cutbacks on reproductive rights, including even cutbacks on contraception, but also this effort to make it harder and harder and harder to get abortions. So, I think it’s all very much part of his campaign and what he sees as ‘making America white again,’” the author said.

The most recent report by the US Centers for Disease Control and Prevention found that there were 3,791,712 births in 2019, which is a 2% decrease compared to 2017.

“The birth rate is the lowest it's ever been in the US, and that includes across the demographic spectrum - so, Latinos, African Americans, Asians - it’s all going down, and there’s a lot of worry about this among corporate elites,” Brown noted. “They worry that, you know, it will decrease the growth rate of the economy in general; they worry it will cause stagnation like they claim it did in Japan … They are very concerned about that in general. They think, you know, that economic growth is based on population growth.”

“They [the Trump administration] claim to be for families, but what they really mean by families is women doing the unpaid work of raising and caring for children, and they don’t want to put anything towards that as a country … very much, it’s part of this anti-immigrant move,” she said.

“And you know, they are not against immigration per se. They want immigrants to not have rights, and so that is why there is a lot of repression against immigrant communities to make people scared to stand up for their rights. At the same time, Trump is sending troops to the border to stop women and children refugees from Central America. He’s also signing in a larger proportion of the workforce to come in as guest workers under the guest worker program. They do want workers. They want them to not have rights,” Brown explained.

According to Brown, countries like Poland that have attempted to outlaw abortion have not experienced a corresponding increase in birth rates.

“Countries that have had abortion rights and lost them, such as Poland, have found that it does not actually increase the birth rate very much … because anybody who gets pregnant who does not want to be pregnant will find a way to end that pregnancy, and that’s what we’ve seen throughout US history,” Brown noted. “What it’s going to result in if they further make access to abortion difficult is that it’s going to result in a lot more deaths and complications from illegal abortions.”

In March, the US Supreme Court will hear June Medical Services v. Gee, a case that could pave the way for further rollbacks of abortion access in the US if the court rules against abortion providers and upholds a Louisana law requiring them to retain hospital admission privileges.

“This administration is one of the worst in terms of actually supporting what families need. They’ve consistently cut everything that is required. They tried to get rid of the Affordable Care Act. All of the things that are required to actually have a healthy family and raise a family. And obviously they don’t want to pay for any of these things, but they do want us to have kids, and they want to push all of those costs back into the family and not provide it on a social basis,” Brown added.