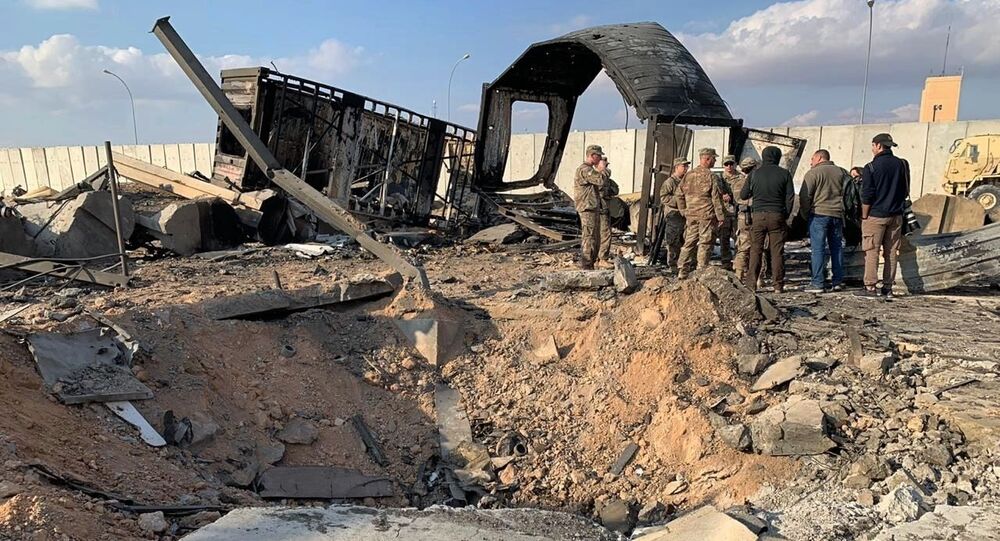 The Pentagon confirmed Thursday that 11 US troops sustained injuries in the Iranian strikes last week against military bases housing US troops in Iraq. Had there been American deaths, the US may have become embroiled in a dangerous and catastrophic war with Iran, retired United States Army Colonel Ann Wright told Sputnik.

In a statement to reporters, Capt. Bill Urban, a spokesperson for US Central Command, said that the service members from the al-Asad airbase in Iraq were being “treated for concussion symptoms from the blast and are still being assessed” in Germany and Kuwait.

"As a standard procedure, all personnel in the vicinity of a blast are screened for traumatic brain injury, and if deemed appropriate are transported to a higher level of care,” Urban added.

According to Wright, who also formerly worked as a US State Department official in Afghanistan, concussions and other traumatic brain injuries are often a risk for members of the military.

“Concussions give you traumatic brain injuries, and it’s one of the most common injuries that US service men and women suffer from these days, between IEDs [improvised explosive devices] that are blowing up vehicles or just being around big explosions,” she noted.

“Apparently on the air base that these folks were on, with the Iranian missiles coming in, some of them landed close enough that according to one report that I saw … drone operators that were trying to get their drones up before the missiles came in … were knocked to the ground by the force of the explosions of the missiles, and that would definitely give you a concussion, otherwise known as traumatic brain injury,” Wright told hosts John Kiriakou and Brian Becker on Friday.

In his address to the nation last week, US President Donald Trump said that no US military personnel were hurt in the January 8 Iranian missile attack. He also didn’t promise any military action against Iran but emphasized that the US Armed Forces possess "big and accurate" missiles.

“I can imagine that the military commanders on that base really breathed a sigh of relief that indeed the Iranians had targeted areas of the air base that did not cause death of people,” Wright said.

“Generally, the US military classifies even injuries as part of casualties, and they specifically say whether the casualty was a death. But I can imagine the US commander said, ‘Oh, thank goodness.’ Because if the missiles had landed in populated areas as a direct response [from Iran] saying, ‘We are going to kill Americans like you killed our general,’ then it would have been a wholly different outcome, I think. And I think the generals themselves in the Pentagon were counseling Trump very, very strongly saying: ‘They purposefully did not target us for death. Let’s just leave it at that,” Wright added.

“The Iranians do have proxy sources throughout the region. It is their neighborhood, and they certainly have liaisons with lots of groups that could certainly do lots of harm at any moment to senior-level as well as junior-level US government employees, whether they be military or diplomatic people,” Wright told Sputnik.

Wright noted that on January 25, antiwar activists have planned an International Day of Protest against a potential US war against Iran.

“It’s very important that we as citizens come out on January 25,” she said. “No way in the world should there ever be a war on Iran. Iran has 80 million people. It is a strong, strong country and a strong military.” The former US diplomat noted that such a war would be “a major conflict with hundreds of thousands of people being killed, and you can expect a lot of American casualties if the US decides to attack Iran. So we need to be on the streets saying ‘no war on Iran.’”

Trump Warns Iran's Ayatollah Khamenei to Be 'Careful With His Words'