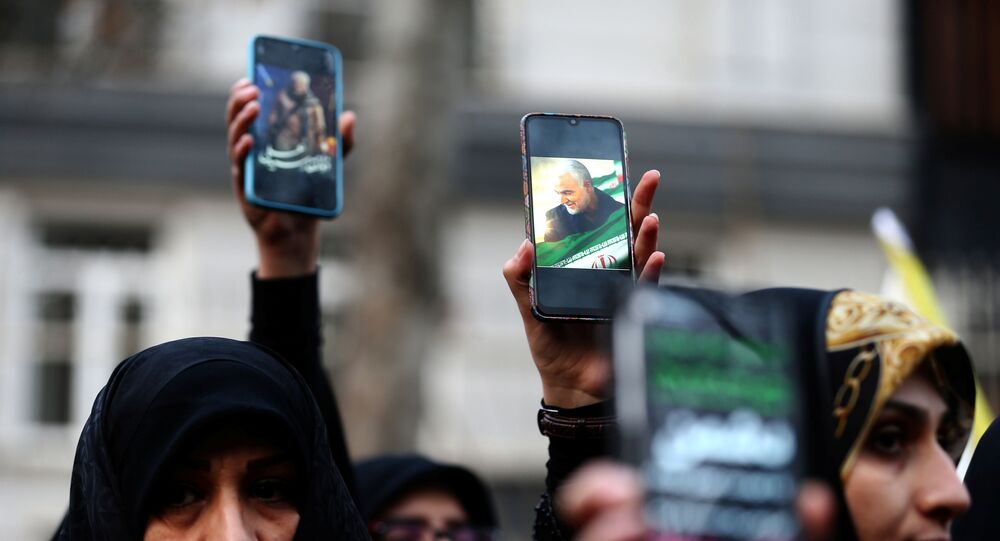 On Friday, the US conducted an airstrike in Baghdad that was green-lighted by President Trump, but was not authorised by Congress. The attack left several people dead, including prominent Iranian military commander Qasem Soleimani. Tehran has strongly condemned the US move, vowing a crushing retaliation.

US Democrats are likely to use Trump's unilateral move to exemplify his authoritarianism, while Trump's own party will use it to highlight his stalwart leadership, according to Stephen Nagy, Senior Associate Professor at Department of Politics and International Studies at International Christian University (ICU) in Tokyo, Japan.

Sputnik: It has been reported that Trump did not inform Congress about the airstrike in Baghdad. How do you think this step will affect his relationship with Congress, in particular, the democratic majority in the House of Representatives?

Stephen Nagy: The Trump administration continues to be unorthodox in all aspects of governance including NOT communicating to the Congress about the airstrike in Bagdad.  This is in contrast to previous administrations such as the Obama administration that made strong efforts to have a bipartisan approach to foreign policy. This was exemplified by having Republican Congress knowledge oft he Osama Bin Laden raid.

Not informing the Congress is a symptom of the broader dysfunction and division within the US political system that will make it more and more difficult to find areas of policy convergence. I suspect, the Democrats will use the event to highlight President Trump's authoritarian tendencies and the GOP to use the event to highlight his stalwart leadership. Both are mischaracterisations for political purposes.

Sputnik: How much do you think these events could divert public attention from the current impeachment hearings?

Stephen Nagy: The impeachment process had an expiry date as it was unlikely that the Senate would support the Congresses' decision.

Notwithstanding, the assassination of the Iranian General has sucked all the oxygen out of the impeachment process by distracting the media and march for impeachment. Further distraction in the coming weeks and months will be the "phase one " trade deal with China and likely fiery rhetoric vis-a-vis the DPRK.

Sputnik: During his presidency, Trump promised the end of “endless wars” and a withdrawal of troops from the Middle East. How will rising tensions with Iran affect the presence of the US military in the region?

Stephen Nagy: Electoral promises and the reality of governing are always vastly different. A precipitous removal of US forces in the Middle East would either be filled by other forces such as Russia and or China or we would see sectarian clashes between the Sunnis and Shiites, both options would reduce US influence in the region and likely result in more instability manifested in violence, increased energy costs and possibility and disruption in oil shipments which would have global repercussions.

Rising tensions will result in an increased number of special forces operations by the US in the region and likely retaliatory strikes against US assets and friends in the region. Unless there is a major strike by  Iran, I do not foresee and Iraq style invasion on the table whatsoever.

Sputnik: In your opinion, how far will the escalation of tensions between the US and Iran go?

Stephen Nagy: The Trump administration will need to be cautious about the escalation of tensions with Iran as it could leave the US open to other states, namely North Korea, China and Russia to see the escalation as a strategic window of opportunity to further press their national interests while the US is distracted with Iran. With that in mind, I think that the US will seek to limit the escalation to draw clear boundaries as to what is acceptable and unacceptable behaviour towards each other. At the same time, the assassination of the Iranian General is a very strong message to Iran but also North Korea that the Trump administration has the capability and willingness to do a decapitation strike against them if bilateral negotiations do not start to make progress.

Sputnik: What could be Iran’s response be in this situation and how soon can it be expected?

Stephen Nagy: Iran will make a calculated retaliatory strike against the US and or its assets in the region to inflict pain on the US. The most effective way to do this is not through terrorism in the US but through disrupting oil shipments which will impact the US economy negatively. It can also further dilute US diplomatic and military assets in the region through supporting anti-US rebel groups in Syria, Iraq, Palestine and the region in general. While not singly painful, a coordinated, region-wide escalation in anti-American violence in addition to fomenting instability in the Gulf so that oil prices rise, Iran can negatively affect the US economy and bleed some of its military resources in the region.