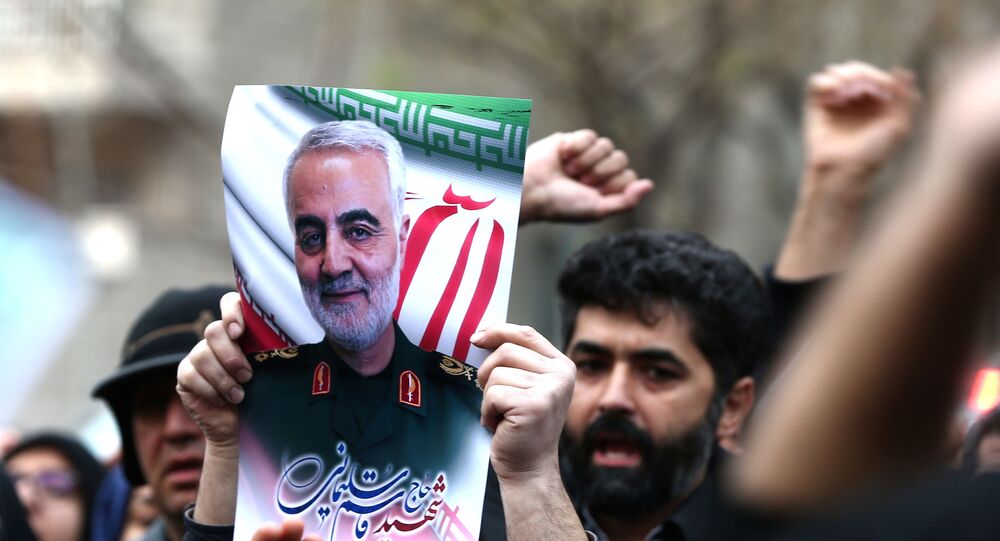 ‘Allies Should Not Surprise Each Other’: UK Reportedly not Warned of US Strike on Top Iran General

Tensions have been spiralling in the Middle East after Iranian General Qasem Soleimani, the commander of the Islamic Revolutionary Guard Corps’ elite Quds Force, was killed in a drone attack near the airport of the Iraqi capital, Baghdad, in a strike authorised by US President Donald Trump.

The UK was reportedly not informed in advance of the US airstrike that killed Iran’s top general, Qassem Suleimani, as the British government scrambled to protect its interests in the Middle East in the wake of the attack, writes The Guardian.

Chairman of the Foreign Affairs Committee in the last parliament Tom Tugendhat has deplored that the US was routinely failing to inform the UK of such decisions in advance.

“I’ve long believed that the purpose of having allies is that we can surprise our enemies and not each other, and it’s been a pattern, sadly, which has been a bit of a shame, that the US administration of late has not shared with us, and that is a matter of concern,” Tugendhat was quoted by BBC News as saying.

Urging the US administration to “share much more closely with allies” in the future, he added:

“The government needs to make some very quick choices on the safety of citizens overseas and the security of British personnel.”

Earlier, it was reported that Prime Minister Boris Johnson, who has been celebrating the New Year on the private Caribbean island of Mustique, had no prior knowledge of the imminent attack. There has been no official comment from the Prime Minister.

UK Foreign Secretary Dominic Raab said the government had “always recognised the aggressive threat posed by the Iranian Quds force”, whose leader Qassem Suleimani was killed in the strike.

© REUTERS / Nazanin Tabatabaee
Demonstrators burn the U.S. and British flags during a protest against the assassination of the Iranian Major-General Qassem Soleimani, head of the elite Quds Force, and Iraqi militia commander Abu Mahdi al-Muhandis who were killed in an air strike in Baghdad airport, in Tehran, Iran January 3, 2020

Nevertheless, as he urged all parties to de-escalate the situation, he added:

Raab discussed the escalating tensions in the region with Donald Trump’s secretary of state, Mike Pompeo, in the aftermath of the attack, as Ministry of Defence and Foreign Office officials have begun reviewing measures to protect the 400 soldiers based in Iraq, as well as British citizens and diplomats there.

UK bases in the Middle East have been put on a state of heightened alert.

The UK Foreign Office advised British-Iranian dual nationals against travelling to Iran, and other British nationals to seek further advice before travelling there.

US President Donald Trump said Washington had authorised the strike as preemptive action against Soleimani to “stop a war.”

A statement from President @realDonaldTrump: pic.twitter.com/Jfy4GCLdif

​An adviser to Iranian President Hassan Rouhani said the United States had crossed a “red line” with the attack, while Iran's Supreme Leader Ali Khamenei warned that a “harsh retaliation is waiting” for the United States.