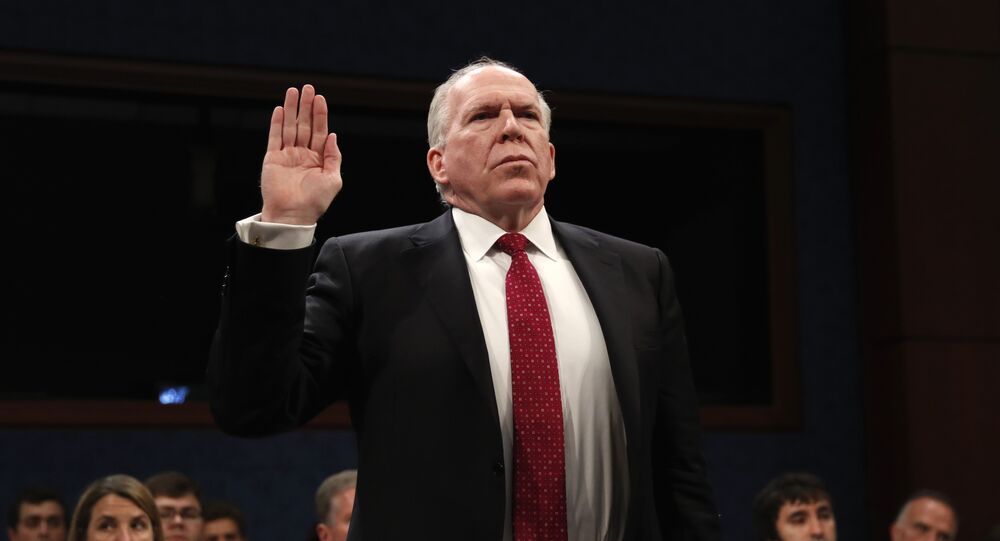 The Department of Justice (DOJ) investigator probing the origins of Russiagate is reportedly seeking communications documents associated with former CIA Director John Brennan. A journalist told Sputnik Brennan played a vital role beginning the probe, and the DOJ’s recent internal report exposed just how much dissent there was about his conclusions.

After former special counsel Robert Mueller’s eponymous report revealed this past spring there was no collusion between Donald Trump’s 2016 presidential election campaign and the Russian government, the DOJ set out to discover why a probe chasing the nonexistent collusion had begun. Attorney General William Barr appointed US Attorney John Durham to head the probe, and Durham’s latest subject of interest is Brennan.

Brennan played a decisive role in beginning the Russiagate narrative and the intelligence community’s probing of Trump’s campaign, hand-delivering intelligence reports to then-President Barack Obama that ostensibly came from a mole so deep in the Kremlin that they were privy to Russian President Vladimir Putin’s supposed personal instructions to help get Trump elected.

However, some of the strong disagreements behind the material that went into that document, which supposedly came from conclusions drawn by 17 US intelligence agencies, were made public in a report published earlier this month by DOJ Inspector General Michael Horowitz. That report focused on the FBI’s failures in applying for secret warrants under the Foreign Intelligence Surveillance Act (FISA) to spy on Trump campaign affiliates, but it also highlighted the intense disagreements between Clapper, Brennan and then-FBI Director James Comey about whether or not the dossier drawn up by former MI6 agent Christopher Steele, used to justify the faulty FISA warrants, should be included in the DNI’s report.

The New York Times noted that while Comey and then-FBI Deputy Director Andrew McCabe strongly favored including the Steele dossier in the report, Clapper and Brennan did not, feeling its information had not been properly vetted. Eventually, the dossier was included in the appendix.

The Times reported Thursday that Durham had requested Brennan’s emails, call logs and other documents from the CIA in an effort to find out just what Brennan thought of questionable sources like the Steele dossier, which he has publicly claimed never influenced the January 2017 DNI report.

Daniel Lazare, a journalist and author of three books - “The Frozen Republic,” “The Velvet Coup” and “America’s Undeclared War” - told Radio Sputnik’s Loud and Clear Friday the dossier was “farcical,” as it suggested that Putin had cultivated Trump as an asset to “wreck the entire Western Alliance” since 2011, when the real estate mogul was “tabloid fodder, nothing more.”

“Nonetheless, the FBI took this seriously. Comey, the FBI director, was apparently convinced that Steele was telling the truth, and it’s unclear what Brennan thought of the dossier, because he said one thing and then another,” Lazare told hosts Brian Becker and John Kiriakou. “But clearly, the dossier had a huge impact on the FBI’s investigation and probably had some impact on the CIA’s investigation as well. So it really played a major role in propelling this whole Russiagate episode, this bizarre episode.”

Lazare noted that in recent weeks, the Russiagate narrative has been dealt a stinging blow. “We know, according to the Horowitz report … that the Steele dossier was a tissue of lies and distortions, that the FBI investigation was just an outrage of incompetence and political bias. So now, other people who were involved in this dossier are in trouble.”

However, the incident that got the ball rolling on the Russiagate investigation was the March 2016 meeting between newly minted Trump campaign adviser George Papadopoulos and Joseph Mifsud, a Maltese instructor at Link Campus in Rome, Italy. Mifsud told Papadopoulos that Putin had damning information about Clinton, Trump’s rival in the upcoming election, and that information made its way back to the CIA via Alexander Downer, then the Australian high commissioner to the United Kingdom.

Durham traveled to Malta in October to meet with Mifsud, who reportedly gave him a lengthy deposition and two Blackberry cellphones carrying information, according to the Washington Times.

Not only has Comey explicitly said that Mifsud is a Russian agent, but so have the New York Times and the Washington Post, and Mueller “hinted very broadly” that was the case in his report, Lazare noted.

“We know from a wealth of data that he is, in fact, tied to the West,” Lazare said of Mifsud. “His own employer said so; he’s a long-time official with a private school in Rome that has long been an FBI/CIA training ground … he’s hobnobbed with top British politicians, with top British intelligence personnel … so there’s little doubt as to where his loyalties lie.”

“He’s even served as a consultant to the US State Department and a featured speaker at a US State Department-sponsored conference in Washington in February 2017,” Lazare noted, referring to the 2017 “Unity in Community” meeting at the Omni Shoreham Hotel, which listed Mifsud as a speaker on February 8 of that year.