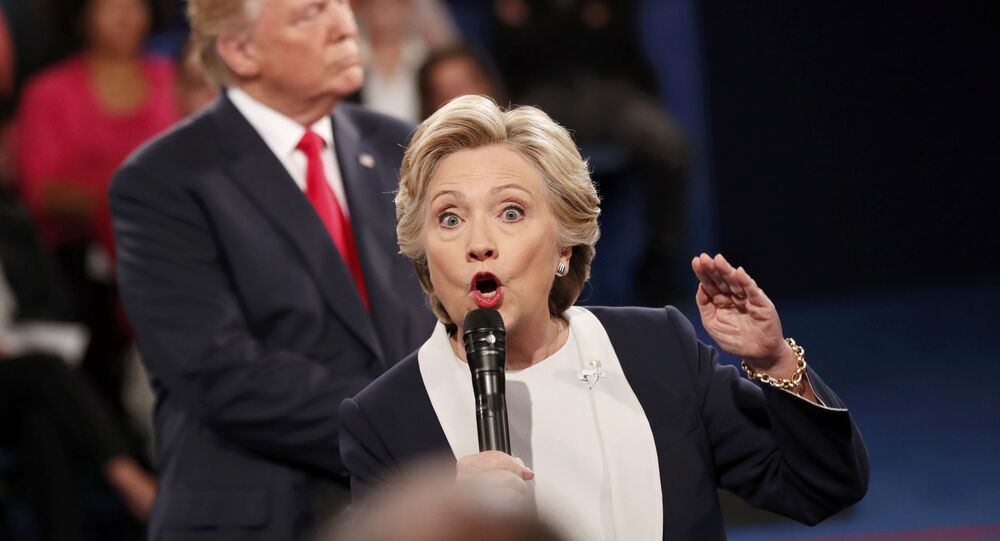 Andrii Telizhenko, a former high-ranking Ukrainian diplomat known well in Washington circles, had vital information about collusion between elements of Ukraine’s Petro Poroshenko administration and the US’ Democratic National Committee (DNC) to dig up - or create - dirt on Donald Trump, but he has been chronically ignored by US investigators.

Telizhenko appeared as a key source in a January 2017 Politico article by Ken Vogel titled, "Ukrainian efforts to sabotage Trump backfire: Kiev officials are scrambling to make amends with the president-elect after quietly working to boost Clinton."

While Telizhenko did far from tell all in the Politico story, his name was out there as someone with more information on the mysterious Steele dossier, which has generated so much speculation — not to mention lawsuits — regarding the veracity of its contents and sources.

Still, Telizhenko told Radio Sputnik's Fault Lines on Wednesday, nobody ever tried to contact him, nor accepted the offers he made repeatedly to Washington higher-ups to testify about what he knew.

​When investigative journalist Bob Woodward released a new book on the Trump White House on September 11, 2018, it made more than a few waves with its insider, play-by-play narrative of the last year and half of the Trump presidency. Titled: "Fear: Trump in the White House," a certain passage from it stuck out to friends of Telizhenko, who was driven into a rage when a passage was forwarded to him:

From @BobWoodward book against Trump a crazy piece that if it is true then the US intelligence is fully incapable.McMaster and the #NSC say it was Russian propaganda? How did they decide that WITHOUTtalking to me?@realDonaldTrump @POTUS @IvankaTrump @DonaldJTrumpJr @charliekirk11 pic.twitter.com/7gwRZLlaKB

​The passage from the book reads as follows:

​Woodward goes on to say: "‘Clearly Russian propaganda,' McMaster said. He and the NSC and intelligence experts had concluded that."

Telizhenko told Sputnik reporter and investigative journalist Lee Stranahan, who hosts Fault Lines with Garland Nixon, "[W]hen I read it, I was amazed; I freaked out because what it said, basically, [was] that the Politico article on the DNC-Ukraine collusion and interference was Russian propaganda, without anybody talking to me — for me it was a shock. I was just outraged."

Telizhenko had told Vogel for the Politico story that while working at the Ukrainian embassy in Washington, DC, during the US 2016 presidential election season, he had been approached by Oksana Shulyar, an aide to the Ukrainian ambassador, and told, "if I had any information, or knew other people who did," then he should contact Alexandra Chalupa, a DNC operative who also did consulting work for Ukrainian clients.

Chalupa, in turn, contributed to the same Politico article, telling the publication that as early as 2015, she had started trying to use her Kiev sources to dig up dirt on then-candidate Trump.

© Sputnik / Andrey Stenin
‘No One Seemed Troubled’: Ukrainian Neo-Nazi Leader Gets Warm Welcome in US

Telizhenko told Sputnik in a previous interview that trusted sources in Kiev had divulged to him that they had been paid to write salacious stories about Trump by Christopher Steele, a former MI6 agent-turned private investigator, who was in turn hired by the DNC to dig up incriminating dirt on Trump to shame him out of the presidential race or destroy his credibility.

Telizhenko said his sources told him they were told to write "something off the top of your head, something interesting, so that we can put it into a bigger document that we can use in the future." That document became the infamous "Steele Dossier," Sputnik reported.

Telizhenko explained to Fault Lines Wednesday how this situation had come about. While working at the Ukrainian embassy in Washington, DC, a place in which he coordinated with a number of election campaigns, Telizhenko said he "was ordered by the ambassador, Valeriy Chaly, not to coordinate or talk to the Trump campaign at all."

"After those talks with Alexandra Chalupa in March [2016] and her asking about dirt on presidential candidate Donald Trump, I started asking questions to the ambassador, to Oksana [Shulyar] — why is this happening, we should stop this — and then we got into a dispute, and at the end of May, beginning of June, I quit the embassy and came back to Kiev on my own, without anybody firing me. And they still offered me a job at the Ministry of Foreign Affairs, but I denied it, started working in the private sector as a political consultant."

© CC BY 2.0 / Jeff Turner / The Mall - Washington DC
Who's in Charge at the White House? Bob Woodward Book Casts Doubt About Answer

Stranahan asked Telizhenko how he found out about the passage in Woodward's book.

"A friend who read the book, he knew about my story, he gave me this passage, said, ‘Look, Andrii, the story that you were in is being talked about in Bob Woodward's book, what do you think about that?' And when I read it, I was amazed; I freaked out because what it said, basically, [was] that the Politico article on the DNC-Ukraine collusion and interference was Russian propaganda, without anybody talking to me — for me it was a shock, I was just outraged."

But Telizhenko believes he has valuable information that needs to be brought to light — if only anybody will listen.

"I [had] tried to reach out on my own," he said, trying to tap his contacts in Washington, "and everyone just wanted to ignore this topic. I even reached out to the US embassy here in Kiev, to the political section here, and I know that they have an FBI department here in Kiev as a US embassy abroad, but nobody actually came out to me — because they all have my contact [information] — I'm in close contact, due to my line of work, with most of the embassies, more closely to the US embassy here and to the US government — but nobody, I was amazed, nobody reached out to me."

Telizhenko noted that Chalupa had done more than he had in the Politico article to prove the DNC-Ukraine collusion.

"I didn't say everything I knew, and she said more in that article, so where is the propaganda? Is Alexandra Chalupa the Russian propaganda? Who is? I said the truth and what I was aware of. Maybe at that time it wasn't a big story, but today, as we see, it is a big story, compared to what is going on in Washington, DC, and how they want to destroy this administration."

"I travel to Washington and to the United States quite often due to the line of work I do as a political adviser and consultant in international relations," Telizhenko noted. "So I'm there, but unfortunately, even some of my friends who are working in the government didn't reach out or didn't want to talk about this story. I'm amazed, because Donald Trump tweeted about it, said he didn't believe what was going on, but I had a feeling that something happened within his administration [that explains] why this story is not being pushed or why it is that nobody wants to talk to me — somebody's blocking me. So this is what I think happened, because people around him are blocking this story. They blocked it from the beginning."

"I actually wrote to a couple of senators… Lindsey Graham, Senator [Ted] Cruz's office, and Rand Paul and other senators, I don't remember, there were a couple of others, and I wrote to them [that I was] ready to testify. I am here, I can be reached, come to the United States if needed, and I'm here. But no answer yet," he said. Telizhenko says he sent the messages "a week or two ago."

Telizhenko even noted that he was invited to, and attended, Arizona Senator John McCain's funeral, but "we did not talk about that topic."

Noting that there is no excuse for anyone he's reached out to to doubt his credentials and credibility, Telizhenko said, "What I think is going on is that Ambassador Chaly and the people around him are spreading the word that I'm Russian propaganda, a Russian spy."

"It was really strange. I remember I was in Washington on July 4 that year, and I was in Washington, DC, on August 15 to 18, and nobody reached out. Nobody. Before the tweet and after the [Trump] tweet. It was like nobody even cared, unfortunately."

BuzzFeed Has No Evidence to Prove Claims in Dodgy Dossier - Lawyer