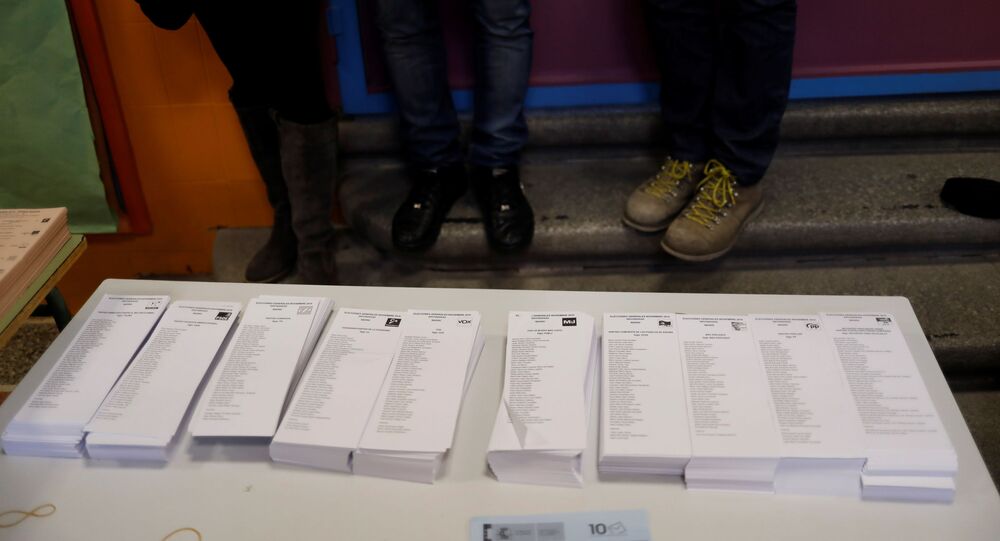 'What Spaniards Will Not Accept, Is Another General Election' – Cardiff University Academic

According to the Spanish Election results, Prime Minister Pedro Sanchez has narrowly kept his hold on power, with the VOX Party also gaining political ground.

Lecturer in Hispanic Studies at Cardiff University Andrew Dowling shared his views on what the outcome of the election means for Spain going forward.

Sputnik: How will the Spanish election results affect the country?

There are only two governing options available to Pedro Sanchez now, and he is the only person who can form a government, he could form a rainbow coalition with Podemos and the Catalan and Basque nationalists, but to some extent that would be an unstable alliance.

The only stable possibility for him would be to make a coalition with the Partido Popular, Spain’s centre-right Conservatives, however because of the rise of VOX that has made it more difficult for Sanchez, as the Partido Popular could demand a high price if you will.

Pedro Sanchez had options in April and May, but he chose for a variety of reasons not to go through and form another coalition government, he thought he could get a better outcome, but a bit like Theresa May in the UK he’s ended up in a worse position than he was a week ago.

Spain continues to face fragmentation politically, and many sectors of the economy are likely to be troubled by that, but I think what Spaniards will not accept, is another general election, so the Spanish political class has to find a form of government, because I think going to an election at some point next year would provide massive abstention and incredible momentum to VOX.

Sputnik: Could Catalonia ever be granted an official independence referendum?

Andrew Dowling: It’s a highly unlikely scenario that Spain will ever wish to offer a referendum like the UK did for Scotland to Catalonia. You could probably say in general terms that the position of England towards Scottish independence was broadly neutral, in the sense that there was a recognition in England that it was a Scottish issue and it was the Scottish who should decide it, there was no sense that the English need to be consulted became independent.

In Spain there’s such a deep and profound sense of Spanish national unity, and as far as many Spaniards are concerned Catalonia is essentially a part of Spain, and the image Spaniards will often use when they talk about the idea of Catalonia being independent is that it would be like an amputation, like losing one’s right arm.

You’re dealing with something that’s very deeply rooted psychologically, culturally and politically, and I think that there’s no foreseeable referendum on the agenda for the next few years, you’d need a major change in the Spanish political landscape and political parties for that to happen, and that is absolutely not on the horizon.

Sputnik: Will the increasing presence of the VOX Party in Spanish politics have a negative effect on Gibraltar?

Andrew Dowling: VOX has got a number of strands to its message, it’s got a very strong anti-feminist, almost a kind of man’s rights kind of agenda, it’s got a very strong anti-immigration card, but it’s biggest political message really is about Spanish nationalism, Spanish unity and of course Gibraltar is one element of that, it’s a great wound for Spaniards, that that territory is still held by Britain.

There’s not a lot that Spain can ultimately do about that, but it’s another one of those psychological issues that VOX can use to sort of increase the pressure, but the only slight problem that VOX has now is that the whole cycle of elections in Spain has come to an end, there are no elections on the horizon now, so it’s really up to the Spanish political class to form a stable government for the next two to three years, and that means that VOX ultimately has little impact on the system, but if the Spanish political class are unable to form a stable government; that would give a massive advantage to VOX.