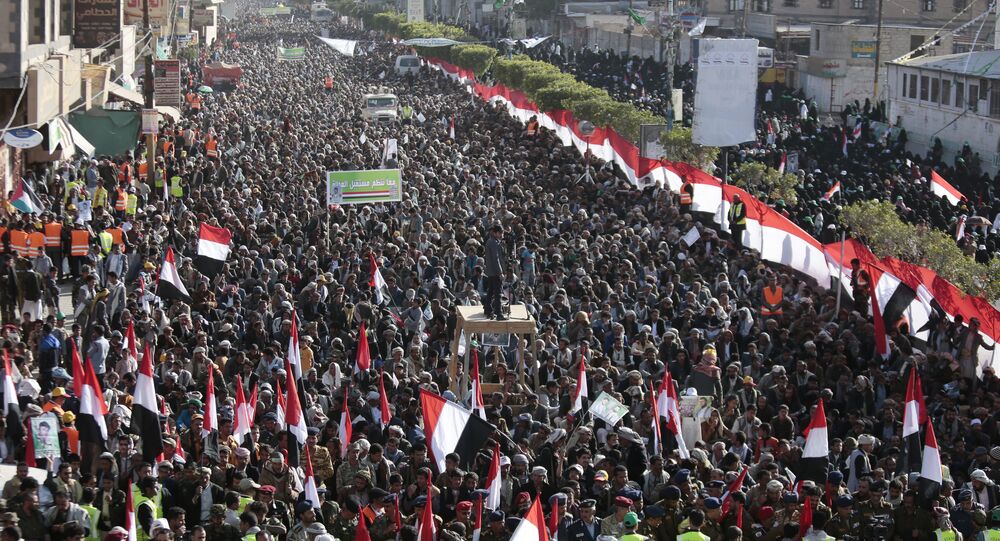 The US and Saudis are so intent on pointing the finger at Iran for the oil facility strikes because admitting the Houthis could hurt the kingdom so badly after five years of war in Yemen means facing the war’s complete failure, an expert told Sputnik. However, if they do attack Iran, Foreign Minister Javad Zarif has promised it’ll be “all-out war.”

Saudi intelligence claimed on Wednesday to present proof that Tehran was behind the Saturday air attack that damaged two Saudi Aramco oil facilities in Eastern Province and halved the country’s oil production temporarily. However, the proof was little more than burned drone frames, and Tehran demanded firmer evidence. That hasn’t stopped Washington diplomats like US Secretary of State Mike Pompeo, who has been adamant it was Tehran’s doing and that the US would respond in kind.

In an interview with CNN’s Nick Patton Walsh on Thursday, Zarif said Iran’s response to an attack now wouldn’t be half-hearted.

Clip from my interview with @CNN: pic.twitter.com/VEWXRlV8m9

​“I make a very serious statement about defending our country,” the foreign minister said. “I’m making a very serious statement that we don’t want war, we don’t want to engage in a military confrontation. We believe that a military confrontation based on deception is awful. We’ll have a lot of casualties, but we won’t blink to defend our territory.”

“They want to put the blame on Iran for something, and that is why I’m saying this is agitation for war,” Zarif continued, noting the Yemeni Houthis had claimed responsibility for the attack despite US insistence it was Iran’s doing.

“You believe that the United States is omnipotent and the United States’ military equipment are flawless, and that is why a bunch of people with no access to anything cannot defeat that. Well I’m going to tell you: it’s going to be news for you, and it’s going to continue to be news for you that people can do a lot of things when they are desperate … that gives you a lot of creativity, a lot of tenacity,” Zarif said, defending the ability of the Houthis to carry out the attack. However, he noted he had no proof the Houthis were responsible aside from their statement, merely that he was sure Iran wasn’t.

Massoud Shadjareh, founder of the Islamic Human Rights Commission, told Radio Sputnik’s Loud and Clear Thursday that the US and Saudi Arabia have been “in a corner” for a long time as a result of the unwinnability of the Saudi-led coalition’s war in Yemen.

“There is really no military solution” to the war in Yemen, which has raged since March 2015, when ousted Yemeni President Abdrabbuh Mansur Hadi fled the country to Riyadh and requested Saudi assistance in kicking out the Houthi government that had come to power the previous September.

“They throw everything at it for the last four-and-a-half years, and the result has been further death, further destruction, further ordinary, innocent lives being … destroyed, and not moving forward even an inch,” Shadjareh told hosts Brian Becker and John Kiriakou. “Therefore, it’s really obvious to everyone that the only solution is a political solution, and they’re not willing to have a political solution.”

“What has resulted, when we saw this attack on Saturday, there was only one way that the US and Saudi Arabia could go, is to blame Iran, there is no other alternatives for that. No matter who did it they would have blamed Iran, because they need to get out of this hellhole they have created for themselves,” Shadjareh said. “But I think by blaming Iran, they’re not really finding a way out, they’re actually digging themselves further into a hellhole.”

“If we don’t find a solution to this, if we don’t find a way to resolve not just this rhetoric that has been going on for the last few days in media … then we are going to, by default, come closer to a horrible war that, by its definition, cannot be limited to anything. It’s going to be all-out,” Shadjareh warned.

“The calculation is, doesn’t matter who’s done it, the Saudis have shown that they are not capable of defending themselves and they’re not immune from a limited, an extremely limited, attack. This extremely limited attack has actually affected their output in a way that never happened before in their whole history,” Shadjareh said. “What would happen if there is a real war?”

“I think the international community, and indeed, the United States, both of the houses [of Congress], need to get involved, because Trump’s policy is totally bankrupt. Trump’s policy will not only destroy people in the Middle East and bring more death and destruction, but it will actually bring suffering to people in the United States,” Shadjareh told Sputnik. “From what I’m seeing, it really is a fool trying to play a game which already is seen to be totally bankrupt, and it will not get anywhere.”