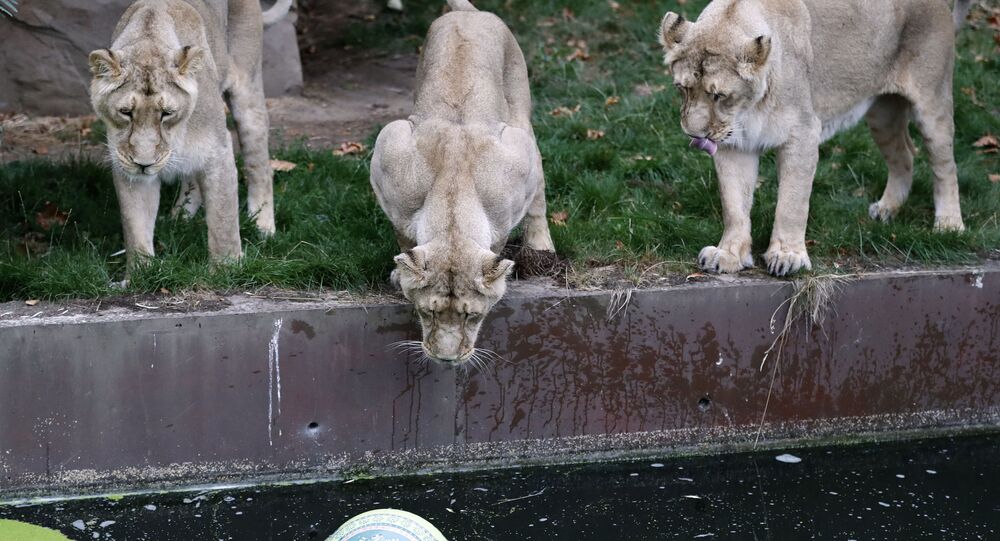 Anything But Wild: UK Government Says It Is ‘Serious’ About Animal Welfare But Won't Phase Out Zoos

Around the world hundreds of thousands of animals are kept captive in zoos for the entertainment of the public. Sputnik spoke to animal rights campaigner Eve Morecombe about why she is campaigning to close down zoos in Britain.

The UK government has said it has no plans to phase out zoos, despite evidence that wild animals suffer from psychological damage from being kept in captivity.

The Born Free Foundation is campaigning to stop elephants being kept in captivity in the UK - there are currently 52 in 12 zoos around the country.

​On their website they said: “Elephants frequently experience considerable physical suffering and psychological distress as a result of being kept in captivity. Yet, the current protection we afford to these intelligent and sensitive animals is wholly insufficient.”

A survey, carried out on behalf of Born Free, suggests 56 percent of the UK public think elephants should not be kept in zoos.

But another pressure group, Freedom For Animals, wants to go much further and phase out all animals in captivity.

I don’t understand why people boycott sea world and not any other zoo like these cheetahs right here are sweating and they don’t even have enough room to run like they would in the wild pic.twitter.com/TegvEr4UgD

​Last month the UK government agreed to introduce legislation to ban wild animals in circuses. Environment Secretary Michael Gove said: “Travelling circuses are no place for wild animals in the 21st century and I am pleased that this legislation will put an end to this practice for good.”

Having won the argument on wild animals in circuses, Freedom For Animals are now turning their attention to zoos.

On Friday, 28 June, they released video footage from undercover researchers showing birds of prey being ‘‘tied down, manipulated and starved” in UK zoos and wildlife centres.

Dr Emma Milne, a vet, said denying birds flight “and the chance to escape stressful situations and the choices that come with that is unacceptable on welfare grounds.”

Freedom For Animals' Campaigns Officer Maddy Taylor said: "Birds of prey used in falconry and held in zoos are still wild animals, they still have all their natural instincts and needs as those animals in the wild. This includes being able to perform natural behaviours, arguably the most fundamental to them being flight. Surely then, denying these animals the ability to fly at will must impact significantly on their welfare? Yet we have found almost three quarters of zoos are tethering birds, some tying them down day and night.”

Animal welfare campaigner Eve Morecombe wrote to the Department for Environment, Food and Rural Affairs - which is led by Mr Gove - and received a reply in which the issue of phasing out animals in captivity was side-stepped.

This is disgraceful. Boycott the zoo. https://t.co/Wvd2VrLxxF

​A Defra official, Mark Oroma, wrote: “The government takes animal welfare issues both here and abroad very seriously. Making zoo habitats more relevant to the animals is an important point and it is encouraging to see that many zoos are making the effort to move in this direction. Obviously it will take time and money and some zoos may struggle for the space to expand some enclosures, however it is important they try.”

Mr Oroma wrote: “I agree that the best option is for all animals to be allowed to roam around freely in their natural habitat. However, sometimes holding animals in zoos is necessary so they can be bred safely and then reintroduced to the wild.”

Ms Morecombe said: “They hardly addressed my points and the whole thing was contradictory and untrue. The government want us to believe that these animals are endangered but actually a very small percentage of them are.”

Asked why she wrote the letter, Ms Morecombe said: “I felt helpless and just wanted to be heard, if enough people made noise about the issue maybe the department would take notice.”

In the letter Mr Oroma said: “Well-managed zoos are in a great position to inspire the public’s interest in nature and wildlife, by raising awareness of conservation and environmental issues.”

But the letter did not address the question of phasing out zoos.

Serial bill blocker Chris Chope MP who blocked bills on #Upskirting and #Finnslaw is at it again!
He has once again blocked a bill to ban wild animals in circuses!
RETWEET if you agree it is time his constituents got rid of him. #GiveChopeTheChop pic.twitter.com/F2UvW48rHR

​Ms Morecombe said: “It makes me lose faith in the changes I’d hoped would happen for the future generations. Zoos are clearly just seen as a source of income and they are sold to the public as ‘educational’ and we are made to believe that its necessary for research but most of the animals in zoos in the UK shouldn’t even be in this country.”

She said: “Britain could propose a ban on relocating animals across the world and breeding, therefore this generation of animals in captivity could be the last.”

Opponents of animals in captivity welcomed news in 2015 that a company was building a virtual zoo in China - with virtual reality headsets transporting visitors onto the African plains - and hoped it could be an answer to holding animals in captivity.

But there is still no sign of the project opening.

This-is the cruelty free future-Virtual reality amusement park in China will include a virtual zoo https://t.co/uGGv8yIOfs via @mashable

​Ms Morecombe said: "Technology is so advanced now that it makes no sense for these animals to suffer in order for people to learn about wildlife. You can teach people extensively about different species by using resources like online videos, National Geographic footage, Blue Planet documentaries."

The Zoological Society of London, which runs London Zoo, has played down demands to phase out animals in captivity and in a statement they said: “ZSL leads the way in animal care, with all our residents’ homes designed with their specific needs in mind. As such, ZSL experts are often called upon to inform exhibit design in zoos and wildlife parks across the world.

“Throughout its almost 200 year history ZSL has continually built upon its knowledge of animal care to improve husbandry, largely informed by the tireless work of ZSL conservationists and scientists working in the field. ZSL also contributes to the improvement of animal care through the work of its wildlife health team, which shares its veterinary expertise globally to help protect wildlife and the environment.”

Amazing. Makes me so sad and angry when I see clips of these magnificent intelligent beasts in aquariums. Please boycott aquariums and zoos. Animals are not our prisoners. https://t.co/y5r8RPvGPM

​Liz Tyson, a former director of Freedom For Animals, said: “We know that zoos will not stop making their loaded and misleading claims surrounding educational benefit and so are calling upon schools and parents to consider the findings of this research and make up their own minds. There are many ways to learn about the natural world without holding animals captive for their lifetimes in order to do so.”

In 2013 a documentary, Blackfish, highlighted the suffering of killer whales and other creatures in the SeaWorld aquariums in the United States.

The film had such an impact that in 2016 Sea World Entertainment announced it would stop breeding killer whales, capture no more from the wild and end theatrical shows.

But People for Ethical Treatment of Animals (PETA) continue to campaign for SeaWorld and similar attractions to be closed down altogether.

The campaign to phase out zoos may depend on a similar attention-grabbing film and the zoo owners are defiant.

Dr Madelon Willemsen, CEO of British and Irish Association of Zoos and Aquariums, said: "People will always visit zoos and aquariums; they are firmly embedded in British and global cultures. In fact, independent research (Morris, Hargreaves and McIntyre 2017) demonstrates that 86 percent of the British population (representative of 43 million people) supports wildlife attractions including zoos and aquariums. Our 121 zoo and aquarium members are centres of excellence where evidence-based animal welfare, education and conservation is at the forefront at all times. With more than 32 million people passing through their gates annually, our zoos are uniquely positioned to connect their visitors to nature through the animals in their care and provide valuable opportunities to lead on pro-environmental behaviour change to their millions of visitors around the world.”