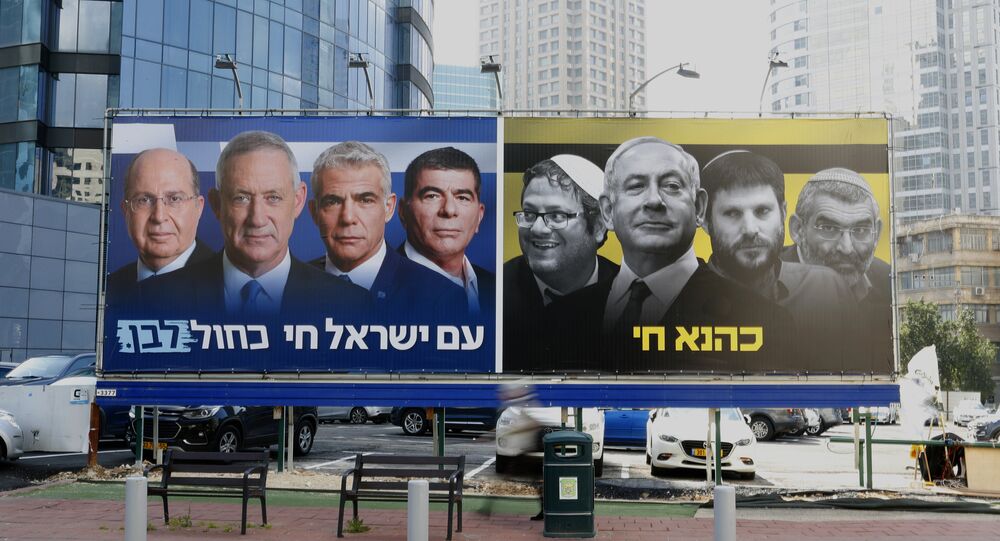 As polls in Israel close, leaders from the two leading voting lists, Prime Minister Benjamin Netanyahu’s Likud Party and Gen. Benny Gantz’s Blue and White alliance, have both claimed victory. Any government will likely come about in the post-election political horse trading, as both blocs try to cobble together a coalition of the diverse parties.

Radio Sputnik's Loud and Clear spoke Tuesday with show producer and Sputnik News analyst Nicole Roussell, who reported from outside Likud's campaign headquarters in Tel Aviv. She said the real issue in this election seems to be "do you want Netanyahu, or do you not?"

​Roussell said one of the unexpected upsets was the poor performance of the Israeli Labour Party, which was projected to win at least 10 seats but might have won only half that. It's a telling descriptor of the rightward slide in Israeli politics, as Labour was one of the powerhouse parties of Israel's early years. Labour was formed from a merger of a number of leftist parties in 1968, including Mapai, the primary partner of every single Israeli government from the country's formation in 1948 up to that point.

One Labour voter told Roussell that the party won her vote because she wanted a "liberal party, nonreligious," noting that "separation of religion and state is important."

This, the analyst noted, was becoming a trend in Israeli politics, but not necessarily along the dichotomous lines of conservative religious parties versus secular liberal ones. New Right, for example, is a party formed last year by former leader of the ultra-orthodox Jewish Home party, Naftali Bennett, which, despite its secular pretensions, remains "very far right and anti-Palestinian," Roussell said.

Roussell said many Blue and White voters indicated they voted for Gantz, a former Chief of Staff of the Israel Defense Forces under Netanyahu, simply out of a desire to see Netanyahu, who's held power for a decade, step aside.

Blue and White spokesperson Yair Zivan spoke to Roussell about the bloc, which consists of Gantz's Israel Resilience Party, as well as Yesh Atid and Telem. He said that "on the security side there are more similarities than differences" between them and Likud, including "deterrence" of attacks coming from the Gaza Strip. But he also indicated a common desire to form a regional conference of "stability-seeking, moderate Arab states" to arrive at a "diplomatic solution" for the "separation between Israel and the Palestinians."

Indeed, the only thing that seemed to differentiate the two was a degree of intensity and some domestic policies, such as Blue and White's professed support for free early childhood education, according to Zivan. While he said Blue and White didn't endorse "annexation" of Palestinian lands because it was unilateral, he did say that "the settlement blocks will be a part of Israel at the end of the negotiation process," which amounts to the same thing.

Zivan quibbled with Roussell over the term "occupation" for the Israeli presence in the Palestinian territories, saying he didn't "accept the term," and characterizing it simply as "a dispute over territory in the West Bank, a dispute between us and the Palestinians." However, the term isn't really in question, as a multitude of United Nations resolutions — the international body that created the Israeli state in the first place — have unambiguously labeled Israeli settlement beyond the 1948 borders as an occupation.

Four years ago, in Israel's last elections, annexation of the West Bank was a position only endorsed by the most extreme elements of the right wing, Sputnik News analyst Walter Smolarek noted. Now, however, Netanyahu has explicitly endorsed it in an 11th-hour, frantic bid for extra votes, and Gantz, the supposed "left-wing" alternative, endorses it in all but name.

Miko Peled, an Israeli anti-Zionist activist and defender of Palestinian rights, told Sputnik last month that "the name of the game in Israeli politics today is who wins the race to the far-most right of the spectrum."