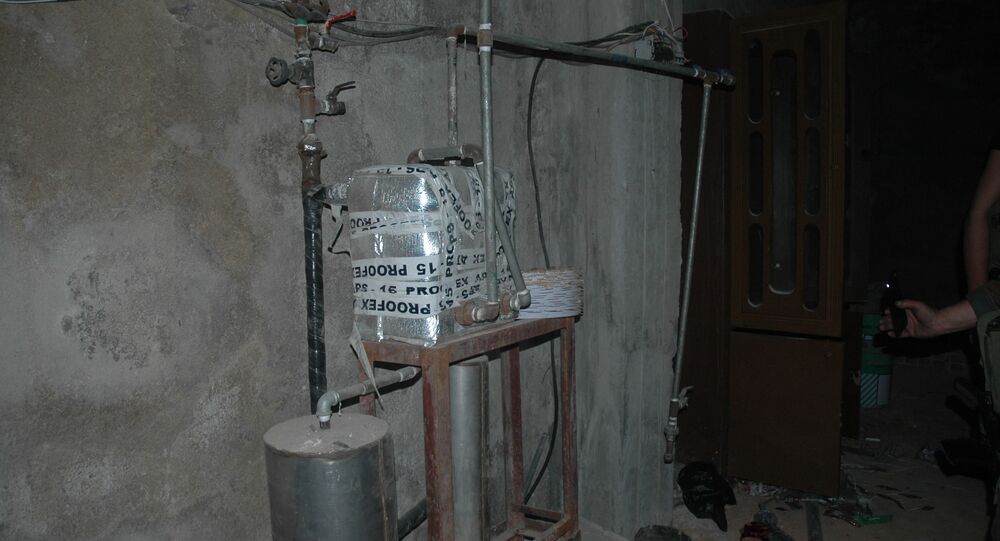 The Trump administration intends to provide $5 million to the White Helmets and the United Nations investigating mechanism in Syria, State Department spokesperson Robert Palladino said in a statement last week. Sputnik talked about the reports of false-flag chemical attacks in Syria with Anna Brees, a UK-based investigative journalist.

Sputnik: Mr Stuart is unconvinced about the authenticity of this footage, pointing out its staged character. What is your personal view on this?

© AP Photo / Ng Han Guan
BBC Claims it Was Censored in China After Report on Ethnic Uyghurs
Anna Brees: I am actually a former BBC employee, I worked for them for a couple of years back in 2011-2012. But just to answer your first question, I was alerted to all of this on Twitter from the tweets that Riam Dalati published which have been captured and they've been shared. It was the first time that I had heard of a BBC employee actually coming forward with information like this, and I basically did some further investigation and had a look at a talk on YouTube called Media on Trial, where Robert Stuart went into quite a lot of detail about this 2013 Panorama documentary. So, I was in shock, I'll be honest with you, this really kicked off for me mid-February, when I saw those tweets.

I just didn't think it was possible for BBC Panorama. I mean, when you think of the reputation they have here, in the UK, and around the world, they are a global brand, they are trusted, I just didn't think it could be possible. I think there is something that is called cognitive dissonance when it comes to this kind of awareness that you could be lied to. In the last eight months, I've been helping a former Scotland Yard detective called Jonathan Wedger, who was trying to expose an establishment cover-up of child abuse. I've been working with him, interviewing victims of abuse, other police officers who've come forward and said that the independent inquiry into child sexual abuse has been going on in London in the last few weeks, and there've been other very senior police officers saying that they were told to keep quiet should they find any kind of VIP paedophile. So, Panorama did a programme about that in 2015.

Panorama also did a programme, or they were working on a programme on Tommy Robinson, which also makes interesting viewing. I watched some of the documentary yesterday. Their agenda basically is not journalism, there is an agenda, they have an objective. I don't think the BBC or BBC employees are like that by any stretch of imagination, but there are very serious concerns here and they are not being addressed. I've been aware of false flag events and I've looked at certain things before, but I wasn't convinced, I don't believe there necessarily have been any other than the one that I've seen and the way Robert Stuart presents his evidence is overwhelming and when he has approached BBC executives, the response has just been silence. He hasn't been called a conspiracy theorist or they haven't really even responded in an adequate way. I think that if this gets out — I mean, certainly the interview I did with Robert Stuart has got something like a hundred thousand views on Twitter and Facebook — this could bring down the BBC.

Sputnik: You think it's that big?

Anna Brees: If it gets out, yes I do. I was so proud to get a job for the BBC, I have to say, my last full-time staff position was at BBC Southampton, South Today, where I got a job as a presenter, and I beat 200 people to get that position. I know some people who didn't get the job and went on to work for ITN and I know somebody who is the ITN news editor for the ten o'clock news. It was something to be so proud of, I remember being so excited when I got that job for the BBC. I'm 42, we've grown up with that organisation and [we] trusted them. Obviously, there was the whole Jimmy Savile thing that they kept quiet about, and now this. And I'm not a fan of Tommy Robinson at all, he holds some views that I find abhorrent, but he did do an undercover footage of one of their reporters and presenters, John Sweeney, and I really do recommend people have a look at that documentary on YouTube, it's got 1.5 million views as of yesterday. And whether you support Tommy Robinson or not, it's really important viewing I think to see what they are up to. Have you seen it?

Sputnik: I've not seen it, but we did speak to various people at the demonstrations in Manchester just outside the BBC building. I think it was about two or three weeks ago. There were various observations with regard to that particular protest, and there was a counter-protest.

Anna Brees: They were trying to pay a woman 5,000 pounds to say that Tommy Robinson had assaulted her.

© Sputnik / Alex Maknoton
‘We Are Actually F**ked’: F-Bomb Dropped on BBC on Air Amid Labour Party Split
Sputnik: To be fair, we are not surprised, because there has been a pattern of behaviour from the BBC and this is leading onto my next question. Where do you think this sort of strategy has come from, for the BBC to go in this direction? I'm a British journalist based in Russia and a lot of the news coverage that we hear and we are involved with from the British, it's an information war. Why have things turned around so drastically? I suppose it's a difficult question to answer, but where is it coming from in terms of the divisive nature?

Anna Brees: I think you've got to ask a question how long it has been going on for.

Sputnik: It's never been as bad as this. For the last two years, we've been scratching our heads as to where this has come from. There has always been a little bit, but it hasn't been as ferocious as it is now, if you understand me. The whole Skripal case and the BBC agenda…

Anna Brees: I don't know about that. I think what's happened is that we've now got the means to communicate, I teach mobile journalism and how to boost on Facebook. You can reach 600,000 people for a thousand dollars in 24 hours. I don't believe necessarily that it's been accelerated, that the BBC have been more involved in propaganda than maybe they were in the past, I couldn't say that. I think what's changing for me, is that BBC employees — as I've said I've been contacted by a couple of people since I did my report with Robert Stuart — but I think there is more confidence now in mainstream media journalists to come forward and potentially raise their concerns because of the way communication and social media are now. I don't really like the word social media, and I don't really like the word mainstream media either. We make it a talking point, we talk about the BBC all the time because so many people do still trust them, but that's changing. It's 2019, my children don't watch the BBC.