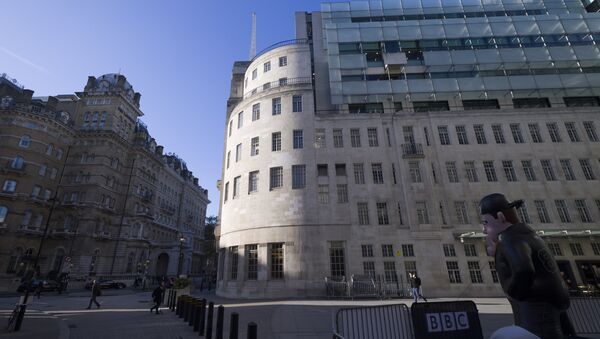 © Sputnik / Alex Maknoton
/
Go to the mediabank
Subscribe
International
India
Africa
The British Broadcasting Corporation has begun an investigation after a voice was heard dropping the F-bomb on air while commenting on the Labour Party split during a live broadcast.

The clip showed the announcement of seven Labour MPs who on Monday morning said that they had decided to leave the party and set up their own independent group. The announcement came as a shock not only to the audience, but also for BBC employees, as one of whom can be heard saying that “between this and Brexit we are actually f***ed.” The voice also can be heard saying “It’s mad, it’s mad.”

I think all political news would be improved by someone muttering “we’re fucked” over it pic.twitter.com/MZVHhtZkZx

The clip was put under investigation “due to an error”, according to a statement from the BBC. “Due to an error, we inadvertently broadcast some background comments from another microphone during our coverage of the press conference this morning. We apologised on air once we realised our mistake,” a BBC spokesperson told The Guardian.

BBC presenter Samira Ahmed, who was presenting the show on Monday, later apologised for her choice of words.

“I should say for those who were listening to that live news conference, there was some bad language apparently, so we do apologise if anyone was offended by what they might have heard.”

The new independent group of MPs announced that they decided to leave the party due to concerns regarding its direction under Jeremy Corbyn, citing the Labour Party’s stance on Brexit, anti-semitism, and the party’s internal culture. The group is not yet a registered political party but has launched a website. The website crashed on Monday due to the large number of people attempting to access it.