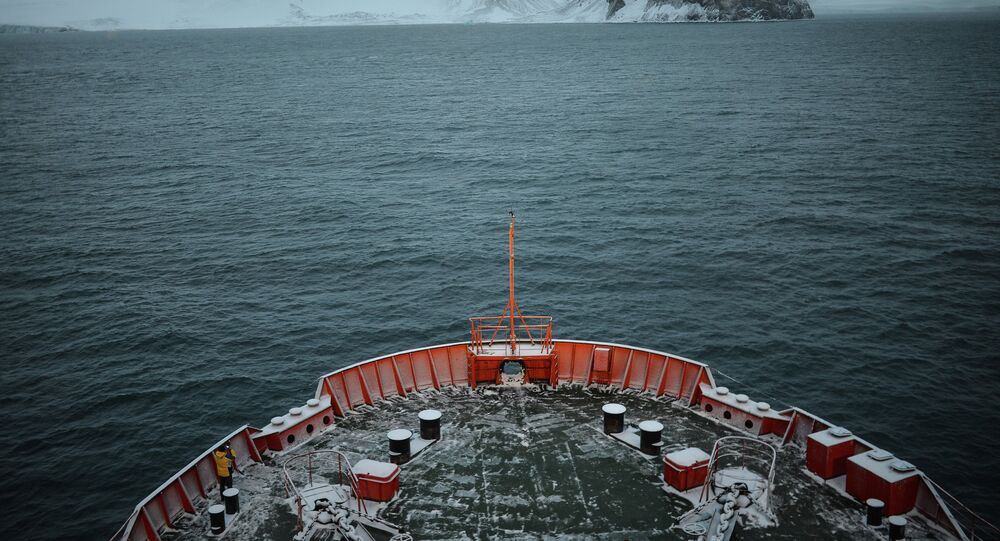 UK Defence Secretary Gavin Williamson, during a visit to a UK Royal Marine base in Bardufoss, Norway announced efforts to increase his country’s military presence in the Arctic. According to the Defence Secretary, London will be deploying over one thousand troops to Norway every year for training over the next ten years.

Radio Sputnik has talked about the UK's plan to increase its military presence in the Arctic with Robert Huebert, a senior researcher at the Centre for Military, Security and Strategic Studies at the University of Calgary, Canada.

Sputnik: How important is the Arctic for the United Kingdom? Obviously, from Mr Williamson's statement, it seems as though it is very, very important.

© Sputnik / Valeriy Melnikov
'Nobody’s Lake': US Admiral Warns of Russia's, China's Activities in Arctic
Robert Huebert: Well, it has always been important. As a good Canadian, of course, our entire legacy of colonial expansion to a large degree was the British Navy looking for the Northwest Passage. So this has been an interest that the British have had since the 1840s, to be honest. It has gone off and on we saw, of course, the […] regions during the Second World War prior to the German invasion, and the British along with the Americans were the largest contributor to Norway during the Cold War period.

So this is something new in the terms of the Post-Cold War era but in the long-term, it is nothing that the British haven't done before.

Sputnik: What is your take on the timing of Gavin Williamson's announcement then with regard to his country's efforts to increase military presence in the Arctic, notwithstanding the historical connotations? I mean, to a lot of experts there is obviously some geopolitical strategy with regard to this and obviously, the war of words with Russia continues from the United Kingdom.

© AP Photo / David Goldman
'Revival of Imperial Ambitions': UK Arctic Buildup Logical Amid Brexit - Analysts
Robert Huebert: What we are seeing is sort of an "action-reaction" in the make since at least 2007-2010. Once again, it is going to depend a little bit on your perspective what side of the divide you are on about who actually who started it. But we have seen a general process of re-militarisation of the Arctic. Most will sort of point to the 2007 announcement by Putin to resume the long-range bomber patrols.

And we see increases in terms of some of the responses on the NATO part and then we see the opening up of the old Cold War bases. Of course, you can't exclude the ongoing tensions that occurred after the Ukrainian crisis. And so we have seen the British saying that they were going to be doing something […] but last three years, to a certain degree, this is the continuation of what the Brits started doing roughly about 2011-2012 in terms of giving more commitment to the Norwegians directly.

Sputnik: How does the UK benefit from this deployment? Is it just this is a continuous strategy with the United States hand-in-hand continuing with the industrial military complex? The only people I see who would benefit are the people who are working in the military and also the people who are working in the arms industry. I don't think anybody else benefits from it, what do you think?

© CC BY-SA 2.0 / Defence Images / Royal Navy Sea King Mk4 Helicopter Takes Part in Arctic Flying Training
UK Announces Arctic Military Buildup to Counter Russia's Activities - Reports
Robert Huebert: Well, the one major aspect that the UK is trying to step into right now is, of course, the growing concern that the American support within NATO is becoming questionable under the Trump administration. And so I think what you are seeing within the efforts of the British to respond in this particular context, is to reassure particularly the European Northern members of NATO and that would also have to be including the Baltic States because this is all interconnected.

This is very much an effort to try to demonstrate that in fact there is a continuous commitment if not by the Americans then by the British on this particular field. And so once again, you are going to be seeing those types of considerations being brought forward by the decision-makers from London, Moscow, Bergen, Oslo and onward. And that's the one that is always is the most difficult to understand, looking from the outside in.

The views expressed in this article are solely those of Robert Huebert and do not necessarily reflect the official position of Sputnik.