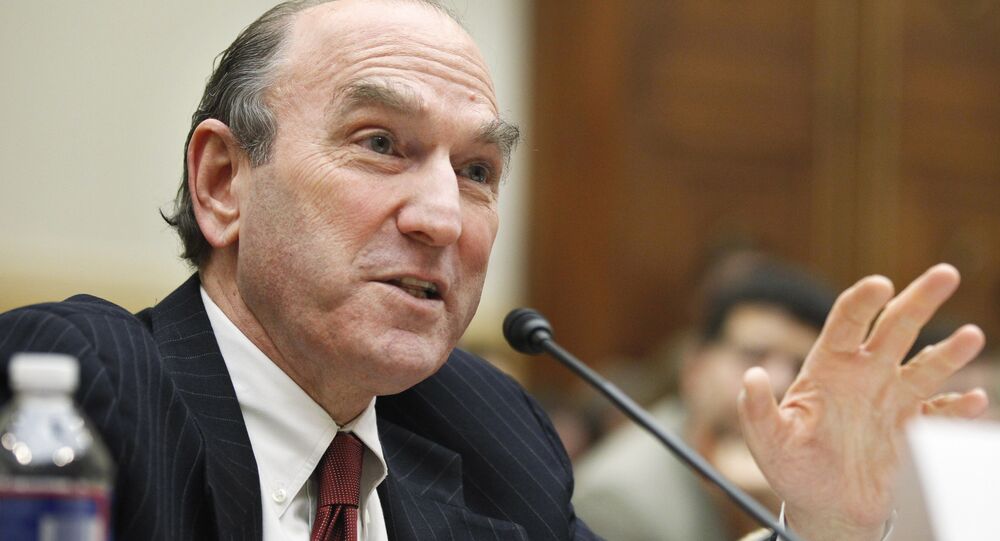 Secretary of State Mike Pompeo has appointed veteran Reagan- and Bush-era diplomat Elliott Abrams as special envoy to Venezuela, tasking him with assisting the the US push to "restore democracy" to the Latin American country. Sputnik has found the key things you need to know about Abrams and what his appointment could mean for Venezuela.

During the 2016 presidential campaign, Elliott Abrams was a member of the so-called #NeverTrump movement, an initiative launched by senior Republican leaders to try to stop Donald Trump from becoming the party's nominee over what was then feared to be non-interventionist attitudes and opposition to nation-building. Abrams wrote several scathing pieces criticising Trump during the campaign, and Trump blocked Rex Tillerson from making Abrams deputy secretary of state in early 2017.

© AP Photo / Jeff Robbins
Oliver North: Cocaine Trafficker, 'Terrorism Sponsor'...and New NRA Chief
A prominent proponent of US interventionism in Latin America to prevent the spread of left-wing governments in the 1980s, Abrams was appointed assistant secretary of state for human rights and humanitarian affairs by President Ronald Reagan, and later moved to the post of assistant secretary for inter-American affairs. In this role, he became a lobbyist and unofficial spokesman for militias formed with US support in Central America, including Nicaragua, El Salvador, Honduras and Guatemala, and worked to cover up or discredit US media investigations of the suspected crimes committed by these groups.

Abrams' involvement in the secret Reagan White House plot to fund the contra guerillas in Nicaragua by selling arms to Iran earned him two misdemeanor convictions for withholding information on the affair from Congress. Fortunately for Abrams, the convictions did not land him any jail time, and he was pardoned by President George H.W. Bush, Reagan's successor, in late 1992.

#3: Fellow at the Council on Foreign Relations

Abrams is a senior fellow at the CFR, a highly influential US think-tank whose membership includes many senior politicians, academics, businessmen, and senior media figures. Criticised by opponents including former presidential candidate Pat Buchanan as a pro-establishment, pro-globalism institution attempting to preserve the post-Cold War 'New World Order', the think-tank has been said by academics to have played a crucial role in promoting America's shift from isolationism to interventionism and globalism.

© AFP 2021 / Federico PARRA
Analyst on Venezuelan Crisis: We Are Returning to Old Monroe Doctrine of 'Backyard'
According to investigative journalist Ed Vulliamy, Abrams played a key role in the abortive coup attempt against Venezuelan President Hugo Chavez in 2002, having advance knowledge of the putsch plans, and encouraging the plotters to move forward with the efforts while serving as a special assistant to President George W. Bush. This included support for coup leader Pedro Carmona, who reportedly visited the White House several times in the months leading up to the coup attempt. The Bush administration recognised Carmona for the 47 hours that he claimed power, turning its back on him after Chavez was rescued from his confinement and led a popular revolt to take back control.

Perfect for the Job?

All-in-all, given his penchant for interventionism (including support for the 2003 invasion of Iraq), and his rich experience in Latin America against leftist governments, Abrams may be the perfect candidate for coordinating US diplomatic efforts to replace President Nicolas Maduro with Juan Guaido, who declared himself president last week with US support.

"I left this building 30 years ago this week – last time I worked here – so it's very nice to be back. This crisis in Venezuela is deep and difficult and dangerous and I can't wait to get to work on it," Abrams said after being introduced to reporters by Pompeo on Friday.