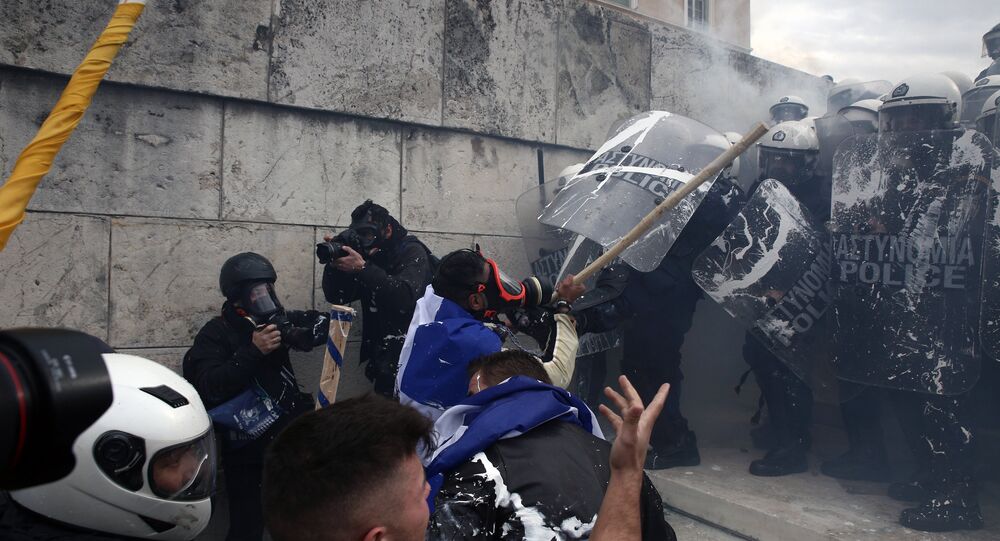 On 20 January, about 60,000 Greeks took to the streets of Athens to protest against the Greece-Macedonia name change deal. During the rally, Sputnik stringer Kostis Dadamis received a head injury and was taken to hospital. Sputnik spoke to the head of its Greek department, Vaggelis Kotrozos, on the current situation in the Balkan country.

Sputnik: Sputnik's website reports that Kostis Dadamis has been in touch with its colleagues at the company's Greek bureau after being injured. How is he doing right now?

© Sputnik / Kostis Ntantamis
Greek Police Say Adhered to Rules During Rally in Athens (VIDEO)
Kotrozos: He was taken to the hospital, where he underwent all necessary medical examinations. Doctors didn't keep him in the hospital, but they suggested him to stay at home for the next 48 hours. Of course, he's under constant monitoring. We contacted him, also today, and he's in a stable condition. He's not in any life-threatening situation, he's in a stable condition. He is recovering. We talked to him. So he's doing generally okay. Of course, our prayers are with him and his family. We are hoping for a swift recovery, and we want to see Mr. Dadamis back in the streets as soon as possible.

Sputnik: What is the current situation in Athens? Is there still some turmoil on the streets or has the city gone back to normal?

READ MORE: Sputnik Stringer in Hospital After Being Injured in Athens Protests

This treaty is not well-received among the Greek public opinion, let's say: according to recent polls, 70 up to 80% of the people are opposing this agreement. And yesterday, there was a huge rally, and at some point it turned violent, and we've had this huge turmoil in the capital. But, no, now, at the moment, everything is stable and things are back to normal.

Sputnik: Do you think more demonstrations will take place once the Greek Parliament will officially ratify the Prespa agreement?

Kotrozos: There is this possibility, because all the information that we have indicates that, as you said, the Greek Parliament is going to ratify the Prespa agreement; and we may expect, when the agreement will be voted in the parliament, that there could be some more gatherings. Truth be told, what was the goal of yesterday's rally, and what may be the goal of another rally, if it may take place (we don't have anything solid confirming that at the moment) was for the public opinion to be shared, because, right now, Greeks feel that their opinion is not shared.

© Sputnik / Kostis Ntantamis
Some 60,000 Rally Against Macedonia Name Change Deal in Athens (PHOTOS, VIDEO)
They are opposing this agreement, yet it will be ratified; so they want to be loud, so that the politicians could actually hear them, and hear what they have to say. We've seen that, in the former Yugoslav Republic of Macedonia, there has been a referendum on the issue, on the naming issue: a debatable referendum, because, though 90% of the people actually voted in favour of the agreement, only 36-37% of voters have participated — if I'm not mistaken. So it's not a politically eligible referendum.

But the Greek people, the Greek public opinion, they want the have the same thing: they want to be asked what they think about this agreement; but, of course, interests are great in this area, geopolitical interests, and as it seems they will not have a chance to express their opinion.