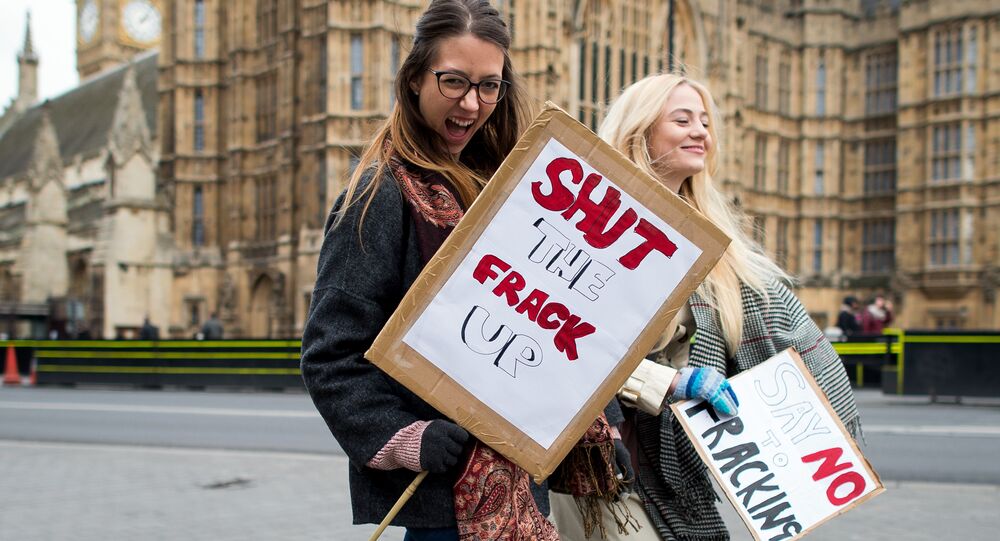 Activist on Fracking: They Could Damage Infrastructure, Damage Well

Caudrilla has had to halt its fracking operation in Lancashire in Britain after the largest tremors registered to date. Earlier Sputnik spoke to Activist Tina Rothery who is at the site about the latest tremors and what it will mean for the future of fracking in the UK.

Sputnik: What do you make of the latest tremors from fracking by Caudrilla?

© AFP 2021 / Paul ELLIS
'Manifestly Excessive': Trio Jailed for Anti-Fracking Activism in UK Freed on Appeal
Tina Rothery: We are unsurprised, but deeply concerned. They are residents that went to bed worried last night, totally terrified. I'm standing outside the frack site, and the neighbours are talking that it might be well and good Caudrilla saying it's about as much energy as dropping a watermelon on the floor, they didn't hear the bang or feel the shaking that our neighbours felt. The protests have been going on here at the side of this road for 712 days now continuously and non-stop and the only time we get earthquakes is when they frack. Now we've had a total of 48 earthquakes, this area has not seen this level seismic activity ever.

Sputnik: How damaging is fracking having on the environment in the area?

Tina Rothery: What concerns us most is deep underground where they are fracking and where the fracking are occurring is around the pipe, so they could damage the infrastructure down there and they could damage the well. Then all of the substances they are using down there could leak into our water supply. We haven't got to that stage yet but these are the things we see that are evident in Canada, Australia and America

© AFP 2021 / Leon Neal
Campaigner: The UK Government Is Out on Limb When It Comes to Fracking
READ MORE: 'Not Sure' UK Govt Can Prove Fracking Safe for Local Community — Activist

Sputnik: Are Caudrilla taking on any of this advice and changing their approach to fracking?

Tina Rothery:  They just don't care at all. I've been personally involved in this fight for 7 years, opposing fracking in the UK; I can say there story on day is the same as their story today. They've not taken on board anything. Before 2013 when they arrived there were hardly any reports on this stuff, now the majority of reports are out. There are 1600 peer reviews studies out since 2013 that say, it is inadvisable to frack, it will cause problems. They all have warning signs, our government chooses to turn its head and ignore it.

Plans of Fracking in UK's Lancashire Run Into Heated Opposition