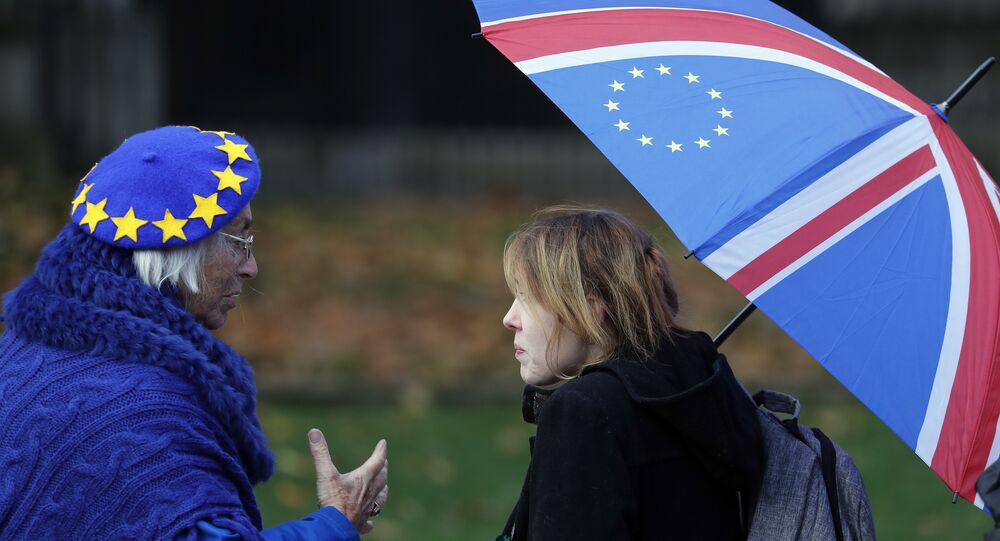 The British Parliament will vote on whether to approve Theresa May's Brexit deal before January 21st. Radio Sputnik has discussed the latest developments with Professor Alex de Ruyter, Director of the Centre for Brexit Studies at Birmingham City University.

Sputnik: What’s your take on the political connotations that's left within Parliament in the forthcoming weeks, because it’s just a complete stalemate, isn’t it?

Alex de Ruyter: The deal the EU said clearly that the withdrawal agreement is final and that any further changes would only be technical, if anything. I think one area that might be easy to change, if they were so inclined, might be the political statement on the future partnership which, of course, might be amended to something more palatable to the so-called Brexiteer Conservative MPs, but that document, of course, is not legally binding. So probably it wouldn't be sufficient to placate would-be parliamentary rebels.

Sputnik: Why has the prime minister retreated at this crucial point and gone to Brussels to discuss the deal? How much is her deal responding to the Brexit people that they voted for, what’s your particular take on this? Because, obviously, from her Lancaster gate strategic presentation then the Chequers presentation, to the actual Brexit deal that she's negotiated it’s very much a watered down Brexit negotiated agreement. It’s not a soft Brexit, it’s a super light one, isn't it?

Alex de Ruyter: Yes, it’s very interesting as you say to go back to that Lancaster House speech where Theresa May's red lines were no jurisdiction for the Court of Justice of the European Union, no membership in the single market, no customs union, control of our borders, control of migration and, indeed, I think if you look at the process of Brexit over the last two years in terms of negotiations, the negotiations clearly haven't been so much with the EU as they have been with her own party. And if one were to credit her with some kind of strategic intent it may well be that she envisaged this whole process as dragging them into the direction of a so-called soft Brexit, but on the other hand, I'd probably just refer to it as just being an exercise in party management without necessarily inferring that.

© REUTERS / Luke MacGregor
UK Real Earnings on the Rise, Employment Rate at Record High Despite Brexit Shambles
In terms of where we are now, of course, and the withdrawal agreement going forward and trying to perhaps seek amendments to the wording of the agreement, the big issue for her and for her party clearly is the status on the Northern Ireland backstop in order to prevent regulatory divergence between Northern Ireland and the rest of the UK that the agreement then in effect keeps the UK in a customs union with the EU. And, of course, in terms of the backstop arrangements, the most contentious bit is the fact that that backstop can only annulled only if both parties agree. And this is the bit that is seen particularly by Brexiteers to be a backdoor trap to keep the UK tied to the EU.

Sputnik: Do you think we’re going to have a second referendum? Is that really going to happen to stop Brexit?

Alex de Ruyter: I think what is clear is, that there doesn’t appear to be a majority in the UK parliament for any kind a deal that Theresa May could negotiate. Equally so, there’s clearly no majority in parliament for a no deal. So we're left for what kind of scenarios one can possibly pursue as an alternative to what she has on the table. There's been some talk of a Norway plus option which would keep the UK in effect in the European economic area, in the customs union, it would then have to abide by freedom of movement, it would have to maintain close regulatory alignment with the EU, that sort of setup could be Brexit in name only. How feasible that is, of course, is open to question, whether European economic area members or EFTA would agree to it. The fact that it would still come with a withdrawal agreement to be negotiated and the continued operation of the Northern Ireland backstop, all those things remain contentious which makes that a bit problematic.

© REUTERS / Jeff Overs/BBC
'Prime Ministerial Crop': Tory Leadership Contest Rumours Grow as Boris Johnson Flashes New Haircut
So, turning to the notion then of another referendum in the sense that we have parliamentary gridlock one could certainly see the rationale for returning it to the people, so to speak. To say that you voted to leave the EU in 2016, is this what you want? I hear the comments around other countries re-voting on issues which have been contentious in terms of ratifying the Lisbon Treaty or the Nice Treaty, but in the case of Brexit there really does not appear to be a parliamentary mechanism to get the UK off the hook, so to speak. So, I can certainly see a clear logic for having another vote. Would it be decisive? The polls at this stage still suggest that people‘s opinions haven’t changed that much. If you had a marginal remain vote you would still have the underlying issues bubbling away, but in a sense it would be a fix to get the UK off the hook. If it could happen, and here is a point, of course, it certainly would not be able to happen within the current Article 50 timeline of leaving the EU on March the 29th. So that would require some kind of extension or otherwise which would require the approval of the other EU 27 members, which I think they would give, but they’ve made it fairly clear that in such circumstances as another election or another referendum that they would be prepared to grant this, but we, of course run into problems because elections for the European Parliament are due in May. So one could well envisage any extension of Article 50 only being for a matter of months.

Sputnik: You're the Director of the Centre for Brexit Studies at Birmingham City University, I’m supposing you've never been so busy in all your life in terms of all the different elements, the aspects, the connotations to this, it must be a fascinating job and role to be doing at the moment. So within your role as the Director of this Centre for Brexit Studies what’s the outcome that you foresee as the most probable now within this Brexit saga or don't you have a view? Are you going to take the Fifth Amendment?

Alex de Ruyter: What do I see as the most probable? Well, obviously, it’s only a possibility; I think the most probable outcome may well be another referendum now. Theresa May’s said she’s dead set against that, the crux, of course, comes in to what extent the Parliament propose alternatives to May's deal, now there’s where we run into a bit of a problem. It’s one thing for the parliament to propose amendments, but the government has to act on them, and without any extension to the Article 50 period in the offing then time is clearly running out. So whilst another vote maybe probable I wouldn’t rule out no deal.

The views expressed in this article are those of the author and do not necessarily reflect those of Sputnik.