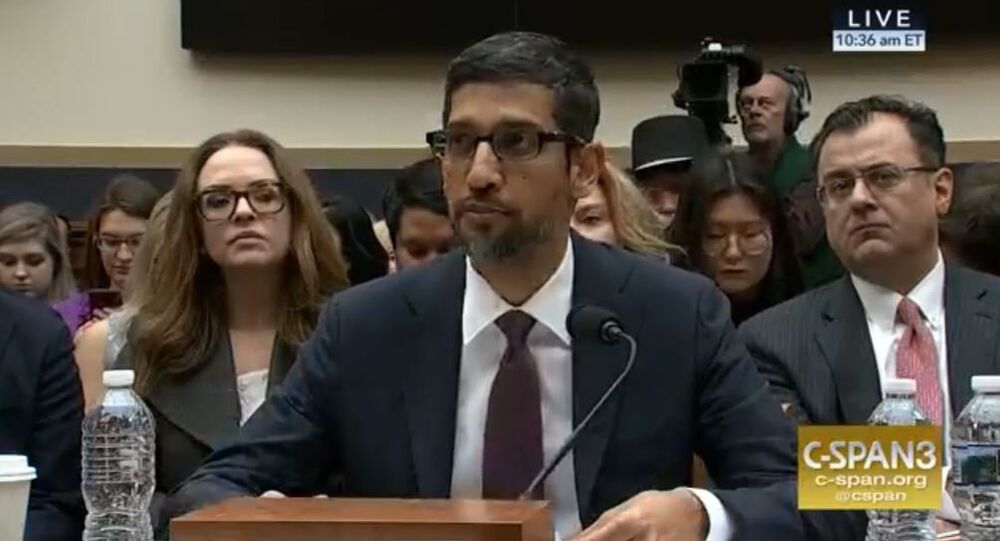 On Tuesday, Google CEO Sundar Pichai made his much-anticipated appearance before the House Judiciary Committee concerning the political bias of his company’s algorithms and privacy practices. However, lawmakers failed to press him on any key issue and when he did answer, he gave evasive, misleading statements.

© REUTERS / Toby Melville
Google to Speed up Shutdown of Google+ After Data Breach
Radio Sputnik's Loud and Clear spoke with Dr. Robert Epstein, the senior research psychologist at the American Institute for Behavioral Research and Technology, about Pichai's appearance and what did — and didn't — come out in his testimony.

Epstein said he was disappointed by Pichai's showing in Congress, noting the executive was "simply repeating things his mentor said over and over for years — that's Eric Schmidt. He also seemed to borrow a few lines from Mark Zuckerberg: he just kept saying over and over again, ‘We'll look into that.' Then he said, ‘This is our policy' in answer to a lot of questions. You know, he basically didn't tell too many outright lies — he told a couple of them — but not too many outright lies. He just gave very misleading answers."

​For example, while he claimed that Google doesn't sell user data, "there's not much difference between monetizing the data, using it as leverage so that advertisers will pay you money to connect with customers, and selling the data. There's really not much difference, and as someone in marketing explained to me, once you hook up an advertiser with one of Google's users, well that advertiser now has direct contact with the user. They get all kinds of information about the user. So, Google has in fact acted as a middleman and has sold the information about the user to the advertiser. So again, lots of misleading statements."

Epstein noted that "very simple facts" were glossed over in favor of political attacks between parties. For example, that "95 percent of contributions from Google employees go to Democrats" and that leaked footage of Google's leaders — including Pichai — and leaked emails shows dismay at Trump's election victory and plans to plot against him.

However, Epstein predicted that after the new year, Congress wouldn't be attacking Google any more once the Democrats take control over the House. "Google is moving towards safer ground," he said.

The researcher noted that his election watching from 2016 was repeated in the 2018 midterms, and that "there is absolutely no question that Google's algorithms helped to swing a number of races toward the Democrats. So again, absolutely absurd that Pichai would deny that Google has strong political bias — and he was even asked if he thought that Google could influence an election. He said, ‘Oh no, people get their information from lots of places.' Well, of course they get their information from a lot of places, but all those places where people get information are in competition with each other. No one's in competition with Google, and people trust Google far more than they trust any other media source. They think — falsely — that an algorithm gives them objective and impartial information, and of course that is absolutely ludicrous."

Epstein noted that that the algorithms are written by Google employees who are making "more than 600 changes per year" to them.

Sputnik reported in September on Epstein's findings that big tech companies like Google have the power to "shift upwards of 12 million votes with no one knowing they're doing so."

In 2015 Epstein wrote a groundbreaking paper about the search engine manipulation effect, published in the Proceedings of the National Academy of Sciences of the United States of America.

"Google's search algorithm can easily shift the voting preferences of undecided voters by 20 percent or more — up to 80 percent in some demographic groups — with virtually no one knowing they are being manipulated," Epstein wrote in Politico at the time.

Epstein told hosts Brian Becker and John Kiriakou that over 2.5 billion people use Google, with that number expected to swell to 4 billion in the next three years. "So we're talking about influence beyond anything anyone has ever imagined. Talk about world domination."

Becker noted that "Monopoly man," a protester who dresses as the titular character from the popular board game, was present at Pichai's hearing to protest the company's monopoly power, although the host noted that even the classic monopolies from the days of oil barons, like John D. Rockefeller's Standard Oil, never enjoyed the penetrating power that Google enjoys into the daily lives of its customers.

Monopoly Man returns to Congress to troll the CEO of the biggest Monopoly in the world: Google.

​Epstein noted the incredible power Google has "to shift opinions and votes with no one aware that they're being manipulated."

Confronted with this, the Judiciary Committee "didn't ask any of the tough questions, and even on some very simple questions they just let Pichai get away with a very, very misleading answer. For example, at one point he was asked: ‘If you, the user, delete your data from Google, do you really delete it, or is it just hidden?' And Pichai says, ‘It takes time for the deletion to propagate through our system, but yes, it's really deleted.' If you read Google's terms of service carefully, it says it might take up to six months to delete your data, number one; and number two, it also says, ‘And we have a right to preserve your data indefinitely if it serves the company.' That's what it says. So it's just nonsense, it's evasiveness, it's misleading answers, and we need to do better."