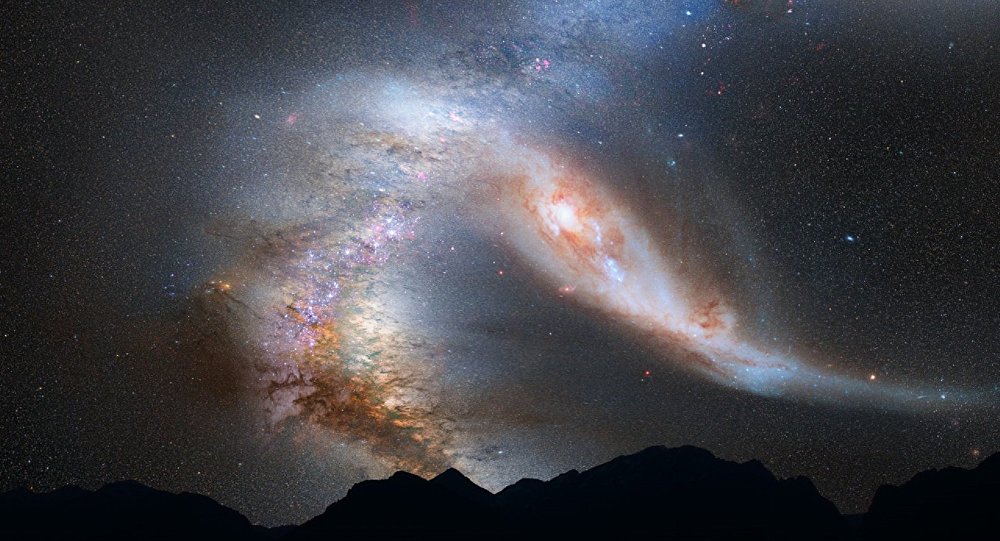 Doctor James Farnes, who led the research at Oxford’s e-Research Centre, said that scientists now think that both dark matter and dark energy can be unified into a fluid that possesses a type of “negative gravity”. It would suggest that the missing 95% of the cosmos had an aesthetic solution, which includes a simple minus sign, according to Farnes.

The research features a computer simulation of negative mass properties, which predicts the formation of dark matter halos. A dark matter halo is a theoretical component of a galaxy that envelops it and extends well beyond its edge. According to Sky News, the simulation matches the behaviour of halos previously suggested by observations via radio telescopes.

Sputnik: Tell us about this revolutionary research and what is it that we didn't know before about dark matter?

© CC0
Astrophysicists Record High-Energy Signal of Extraterrestrial Origin
Dr James Farnes: So dark energy and dark matter are normally considered to be two completely separate things. And it turns out that if you suggest this really unconventional idea that you might have this negative mass fluid that fills all of the universes, that they actually can unify dark energy and dark matter into one single fluid. You know this is unconventional but it suggests, if you would look at empty space, I mean it is not empty at all.

In fact, there are lots of negative mass particles that are continuously popping into existence more and more of them all the time. And this can accelerate the expansion of the universe and also cluster around galaxies. And so this would be completely compatible with the observations we see for dark matter and dark energy when we use telescopes to look up at the sky.

Sputnik: What made you think that this might be the nature of dark matter and dark energy?

Dr James Farnes: So I guess, I had a usual background actually coming into science. So I initially started as an electronic engineer where I guess everything is focused on positive and negative poles when you work with electricity. And then I went and did a Ph.D. in astrophysics and worked on magnetic fields and so then when you work with magnetism, the universe is full of North and South poles.

So then I started thinking about cosmological problems in gravity and it seemed to me I guess I come with a certain bias and I thought well this must have two poles to this. That's what I am suggesting, that you might have positive and negative masses. Anyway, I emphasise that this is early days and we need to do a lot more studies now to test if this can really be true or if it is just, you know, an interesting mathematical idea.

Sputnik: What were the previous models to explain the nature of dark matter and dark energy?

© NASA . NASA/ESA/STScI
Harvard Prof Who Suggested ‘Oumuamua Is Alien Spacecraft Isn’t Backing Down
Dr James Farnes: Well, yes, that is really interesting. So the reason we call them dark matter and dark energy, the word dark really just kind of exposes our ignorance as we have no idea whatsoever physically what those things are. In the case of dark matter, particularly, there are normally two arguments made. Either one, that it is some form of exotic matter, which we don't know what it is or there is some form of modifications to Einstein's Theory of Gravity, which is the best theory we have and we call that modified gravity.

And so in this new theory, we are actually able to view both exotic matter in the form of those negative masses and the modified gravity in the form of these particles being created all the time. And that combination actually seems compatible entirely with dark energy and dark matter.

Sputnik: Can you tell us about how this all fits in with the, you know, I think that the best theory we have right now is the Big Bang theory of cosmology, right? And that would coincide with the Lambda-CDM model.

Sputnik: Tell us about how this new finding coincides with all that and fits in with that?

Courtesy of the European Southern Observatory
sPHENIX Project: How Scientists Study “Soup” That Gave Rise to Universe
Dr James Farnes: Okay. Well, a key observation of prediction of the standard cosmology is what is called the Big Bang which suggested if you rewind the universe there must have been a moment where the universe began and the universe has expanded ever since. This new cosmological model says exactly the same thing. I mean, in fact, there is overwhelming scientific evidence that shows that the Big Bang must have happened particularly from a relic radiation left over and called the cosmic microwave background which can only be explained if there is a Big Bang.

© East News / Martial Trezzini/KYSTN/MBER102
Large Hadron Collider Upgrade Poses No Risks of Black Hole Creation, Earth Collapse - CERN
But there are key differences between that standard Lambda-CDM model and this new one. So, for example, if you look into the future of our universe, the standard Lambda-CDM model suggests all of the galaxies will be pushed apart in an accelerating rate and we will end up living in a really lonely isolated part of space. But in this new theory, it suggests that space will eventually start to collapse again and the universe might undergo a cycle of expansion and contraction. And this might not be the first expansion of the universe. We can try and test these ideas though with future telescopes that are coming up now to look at the sky, get grand new cutting-edge data and to see which of those theories seem to fit the data in the best way.

Sputnik:  So now in that standard model the Lambda as it notes this dark energy is kind of a cosmological constant and the CDM stands for cold dark matter. Why is it cold, tell us?

Sputnik: And does it move relatively slowly? Can you tell us about like the nature of it? I know that this is sort of a space-filler between all these other molecules that we know about and in space as well.

© CC0
Dark Matter Hurricane Gives Physicists Hope They’ll Discover Elusive Material
Dr James Farnes: So if we are in these negative mass particles, these would form a type of cold dark matter. I mean that these particles wouldn't really be interacting with one another. These negative masses are really strange. So if you would approach one it would actually come running towards you instead of away from you and a sea of negative mass particles would all be repelling against one another. So this means that these particles wouldn't really have a chance to heat up as such. They would just remain as a cold and weakly interaction.

The views expressed in this article are solely those of Dr James Farnes and do not necessarily reflect the official position of Sputnik.