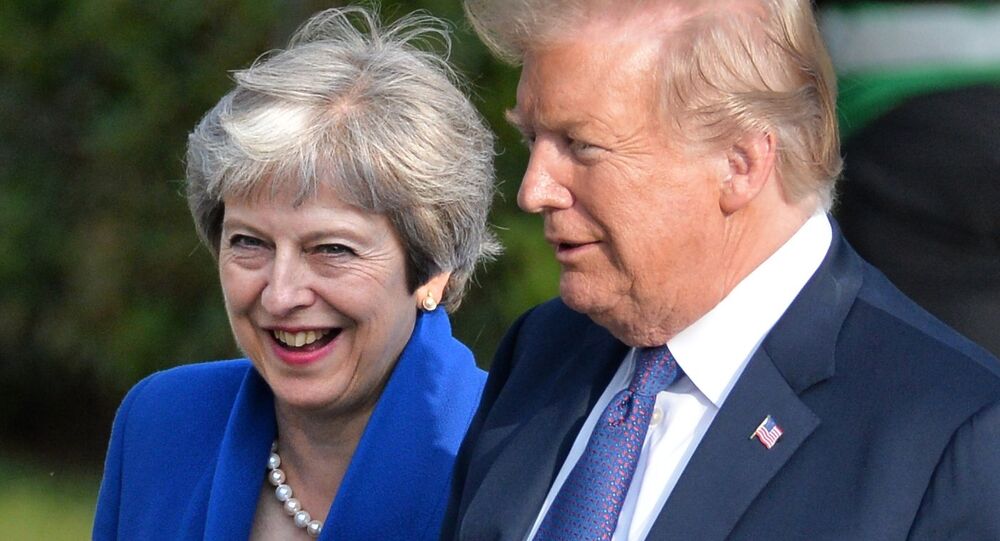 'No Sympathy for Theresa May': Scholar on Trump's Comments on Brexit Deal

US President Donald Trump has said that UK Prime Minister Theresa May’s Brexit deal to be voted on the 11th of December could mean that Britain may not be able to trade with the United States. In response, an anonymous Downing Street spokesperson, cited by the BBC, said that the agreement would allow the UK to sign bilateral deals.

Radio Sputnik has discussed President Trump's statement regarding Theresa May's Brexit deal with Dr Roslyn Fuller, Director of the Solonian Democracy Institute based in Dublin and the author of the book ‘Beasts and Gods: How Democracy Changed Its Meaning and Lost Its Purpose'.

Sputnik: Do you think that Donald Trump was correct in his assessment that the UK might not be able to trade with the US following Theresa May's deal and why or why not?

© REUTERS / Simon Dawson
‘Prime Minister So Far Shows Little Sign of Willingness to Resign’ – Professor
Dr Roslyn Fuller: I think Trump was probably more saying that they might not be able to make the kind of deal he would like to make with them. The issue here I think is that the UK at the moment is agreeing to hold to the European rules and regulations. So, for example, if you want to import something into the EU, you have to comply with the rules and regulations here governing products, you know, that could be relating to safety or standards or something else.

READ MORE: Commentator: 'Very Unlikely' May Will Get Support for Her Deal on Her Tour

And there have been quite a few contentious issues with trade in the US in the past, for example, in accepting beef that has been treated with hormones and things like that. So I think in referring to this Trump is probably saying that he might not be able to do the kind of trade deals he wants to do with the UK in the future because of that rules and regulations point.

Sputnik: Right. How much of a problem is that statement by Donald Trump for Theresa May? I mean do you think that the parliament is looking at this and thinking that is this really making the chances that her deal will get through much worse?

© AP Photo / Thierry Charlier
Theresa May Defends Brexit Deal After Trump Casts Doubt on Future of UK-US Trade
Dr Roslyn Fuller: Well, obviously, that is an issue that has been fraught for a very long time now. I don't see Trump as really having ever had a terrible a lot of amount of sympathy for Theresa May. I would see him as being more of a Boris Johnson kind of guy. So I don't know if this is really going to affect it all that much because everyone is quite fairly clear on their positions already. Labour people who favour remain probably don't like Donald Trump and don't take anything he has to say seriously, anyway.

Sputnik: Right, okay. Do you think that Donald Trump is, in fact, withdrawing his support for Theresa May by making this statement or is he trying to push for certain changes? I mean obviously, the deal can't be changed. It's done now with the EU.

Dr Roslyn Fuller: Yeah, well this is kind of the issue with Trump in general. I think a lot of political analysts, you know, we spend a lot of time trying to interpret, you know, shades of meaning into what politician say. Trump is obviously a lot more forthright than that. He probably is trying to signal that he doesn't believe that this deal is going to get him what he wants and making the trade deal that he wants to make for the United States and for what he regards as his core constituency and his core voters in the US.

So I think it was more about playing to that, playing to his domestic audience at his base rather than trying to withdraw support from Theresa May, who is very beleaguered anyway and who probably unless she can pull off really amazing and probably won't last too long after the Brexit deal is made as a politician.

Sputnik: Right, but it is also interesting the timing of this because, I mean before the Brexit deal was approved by the EU, perhaps there was room to make some changes in it but now that's a done deal. We have heard from Juncker that this is it and this is the best deal and there is no changing it.

© REUTERS / Toby Melville
UK Won't Revoke Article 50, Which Triggered Brexit Process - May's Spokesman
Dr Roslyn Fuller: Well, I suppose there could be a possibility of Theresa May losing this vote. If she loses the vote totally and no Brexit deal can be reached, of course, she will lose a lot of her remaining authority as the prime minister and it is possible that someone would replace her, possibly someone from her own party, possibly there would be elections.

So if it doesn't go through, there is a lot to play for in terms of the UK domestically and politically but also in kind of the entire vision for its future at the moment. You know, you have these many different visions of what the UK economy should look like in the future, the role the UK should play on the world stage in the future. And that's kind of all up for grabs if this doesn't go through.

Sputnik: Right. And we heard today that some people in Theresa May's own party are saying that they will sign off on this vote for this Brexit deal if she promises to resign. What are your thoughts on that?

© REUTERS / Stefan Rousseau
Britain Will be Left Fractured if We Renege on Brexit Vote - UK Finance Minister
Dr Roslyn Fuller: Well, there you go, exactly! I think probably for some Conservatives I think of course it is quite convenient to have had Theresa May, kind of, take on the job as negotiating this agreement, which was never going to get the approval of everyone. You know there was always going to be something that made most people unhappy one way or the other.

So, for some Conservatives, it is very clever to let her take that on, reach a deal, and then take over from her at that point and possibly work towards what they wanted to do from the beginning. So, for example, they could make the deal in its current form and they could over time try to wear away the remaining cooperation with the EU or the remaining regulations that they see as an impediment to the kind of more global trade deals that they want to do.

So to kind of let her have dealt with this situation and then move in to take on a more prominent position themselves,  is actually a typical politician move and a very clever way to play the situation.

The views expressed in this article are solely those of Dr Roslyn Fuller and do not necessarily reflect the official position of Sputnik.