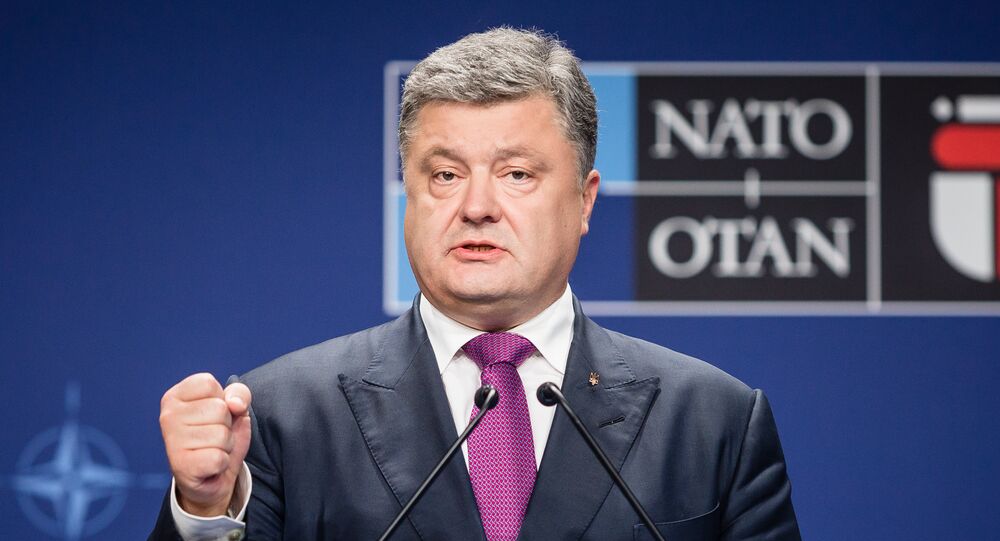 In the aftermath of the Kerch Strait incident Sunday, NATO has pledged unconditional support for Ukraine. Meanwhile Russian military intelligence released footage in which a detained Ukrainian naval officer admits to provocative actions in the waterway. A political analyst told Sputnik Tuesday Russia showed restraint in the row.

"I deliberately ignored [Russian] requests to stop transmitted at VHF frequencies. At the time of the mission, we had small arms and large-caliber machine guns with ammunition on board," Capt. 3rd Rank Volodymir Lesovoy says in the video circulated by the Russian FSB Monday. "I was well aware that the actions of the Ukrainian navy in the Kerch Strait are provocative."

Lesovoy later adds that he was following orders to take the three ships from Odessa, on the Black Sea, to Mariupol, on the Sea of Azov and on the other side of the Kerch Strait, which is only 8.5 miles wide where it's crossed by the Crimean bridge that links Russia's Crimean Peninsula and Krasnodar Krai.

The three Ukrainian ships — the gunboats Berdyansk and Nikopol and the Yany Kapu, a tugboat — were detained Sunday by Russian forces after they veered into Russian territorial waters that were temporarily closed to sea traffic and engaged in provocative actions.

In response, Ukrainian President Petro Poroshenko declared martial law that will last until late January 2019, claiming he had intelligence Russian ground forces were preparing an attack.

The North Atlantic Treaty Organization's press secretary stated Monday that the alliance "fully supports the sovereignty and territorial integrity of Ukraine, including its navigational rights in its territorial waters."

Meanwhile, US President Donald Trump told reporters outside the White House Tuesday that he was "not happy about it at all," but refused to take the belligerent stance his UN envoy, Nikki Haley, adopted the previous day.

"We do not like what's happening either way," Trump said, "and hopefully it will get straightened out."

Haley, by contrast, said the previous day that "in the name of international peace and security, Russia must immediately cease its unlawful conduct and respect the navigational rights and freedoms of all states."

International relations and security analyst Mark Sleboda told Radio Sputnik's Loud and Clear Tuesday that Russia had nothing to gain by initiating a conflict with Ukraine and Western allies. He noted that Haley was right: "this would only worsen the perception of Russia with the West and possibly lead to an increase in sanctions against the country."

© Sputnik /
Ukraine Declares Martial Law Using Russia Crisis as Pretext
Russia "doesn't seem to gain any military victory," Sleboda pointed out. However, he said that there is "some speculation in the Western media that it is about Putin's approval rating, which is sitting at 62 percent while taking a dip from the recent announcement of pension reform in the country, is still well above any Western leaders' levels, and Putin is not ever running for reelection — this is his last presidential term — so I don't think that really provides any explanation or motivation for what the Western media and governments are presenting as happened at this incident in the Sea of Azov."

By contrast to theories about Putin's numbers, Ukrainian President Petro Poroshenko's approval rating checks in at a modest 8 percent only four months before Ukraine's presidential election. His primary rival, Batkivshchyna party leader and former prime minister Yulia Tymoshenko, is polling at 18 percent. "There's room to close that gap," Sleboda said, "and a little bit of military patriotic excitement, presenting him as the protector of the country against Russian aggression, is exactly what was called for. And the fact that even the Ukrainian intelligence service, the SBU, has admitted that they had, an intelligence official on both of the gunboats that were involved… it is assumed they had special order to create this provocation," he said.

Sleboda noted the difference in tone between Trump's and Haley's comments on the situation, as well as how "the extremely strident anti-Russian commentators in the Western mainstream media and commentariat" have treated it as "further evidence of Trump-Putin collusion, being that it's not as strong as the voices out of his own administration."

Of course, statements from European powers are also "neutral in tone," Sleboda noted, "indicating, perhaps, that they are actually paying attention to the details of the incident and that they aren't jumping on Russia as strongly because of that."

The Sea of Azov is shared by the two countries and both Ukrainian and Russian commercial vessels have the right to pass through the Kerch Strait to reach the port cities of Mariupol, in Ukraine, and Rostov-on-Don, in Russia. A 2003 bilateral treaty delineates specific protocols to ensure safety as well as that the interests of both countries are protected while transiting the narrow strait, and Articles 19 and 21 of the UN Convention on the Law of the Sea make clear that the duty for enforcing these safety regulations falls exclusively upon Russia as the coastal state.

Although relations between Ukraine and Russia deteriorated in the aftermath of the 2014 Euromaidan protests, "for four years, passage in and out, commercial, military… despite the change in government in Kiev, no problems because they followed the protocols," Sleboda told hosts John Kiriakou and Brian Becker.

It was those UN articles that the Russian FSB alleged the Ukrainian ships violated on Sunday, leading to their detention in the port of Kerch.

Sleboda said Russia didn't overreact by stopping the vessels, either, noting the extensive measures the Russian ships took to deter and then disable the ships. "The fact that no one was killed, actually, three crewmen were injured, that shows extreme restraint as far as I'm concerned."

"Russia has to take the security of the bridge extremely seriously," Sleboda said, "particularly when Ukraine has called to destroy it."