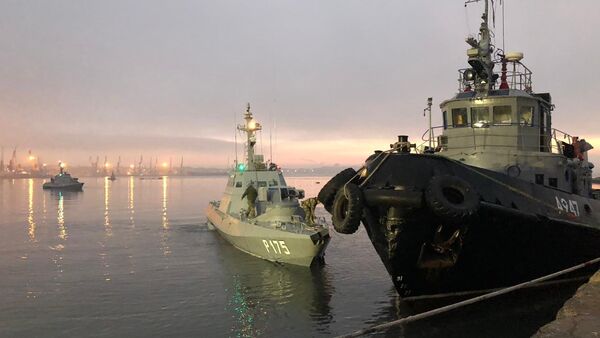 MOSCOW (Sputnik) – The UN Security Council’s reaction to the Sunday incident in the Kerch Strait may encourage Ukraine to stage further provocations in the Black Sea and in the Sea of Azov, Russia's First Deputy Envoy to UN Dmitry Polyanskiy told the RT broadcaster.

On Monday, the UN Security Council voted against the Russian agenda for a meeting on the Kerch Strait incident and later decided to support the Ukrainian agenda for the meeting.

“I fear that, after the Western countries that have particular influence on Ukraine really displayed such an attitude, the Ukrainian side might feel a little bit emboldened to engage in further provocations of this type because they did not hear during this meeting any reproaches from the West that they did something wrong … There is big fear that Ukraine might understand this … as a carte blanche for further provocative actions that could endanger not only our relations but the situation in the Black Sea, Sea of Azov, and in the Kerch Strait,” Polyanskiy said late on Monday.

Kerch Incident ‘Transparently Obvious Provocation’ by Kiev
The Russian diplomat pointed out that members of the UN Security Council did not want to focus on the Kerch Strait incident and instead had begun accusing Russia of annexing the Crimean Peninsula in 2014.

On Sunday, Ukraine’s Berdyansk and Nikopol gunboats and the Yany Kapu tug crossed the Russian maritime border. According to Russia's Federal Security Service (FSB), the vessels sailed towards the Kerch Strait, an entrance to the Sea of Azov, where the ships were seized by Russia due to the lack of a reply to a lawful demand to stop.

In response to the situation in the Kerch Strait, the Ukrainian authorities decided on Monday to impose martial law in select regions of Ukraine along the border with Russia as well as along the coast of the Black Sea and the Sea of Azov for 30 days.

Ukrainian Provocations in Kerch Strait Executed on Direct Orders from Kiev - FSB
The Russian Foreign Ministry stated that Moscow would suppress any attempts to challenge its sovereignty and security. The ministry added that the actions conducted by Kiev in coordination with the United States and the European Union and aimed at provocations in the Black Sea and the Sea of Azov, may lead to serious consequences. Similarly, Kremlin spokesman Dmitry Peskov said that the detention was only a reaction from the Russia to the entry of foreign military ships into the country's territorial waters.
Newsfeed
0
Access to the chat has been blocked for violating the rules . You will be able to participate again through:∞. If you do not agree with the blocking, please use the feedback form
The discussion is closed. You can participate in the discussion within 24 hours after the publication of the article.
To participate in the discussion
log in or register
loader
Chats
Заголовок открываемого материала