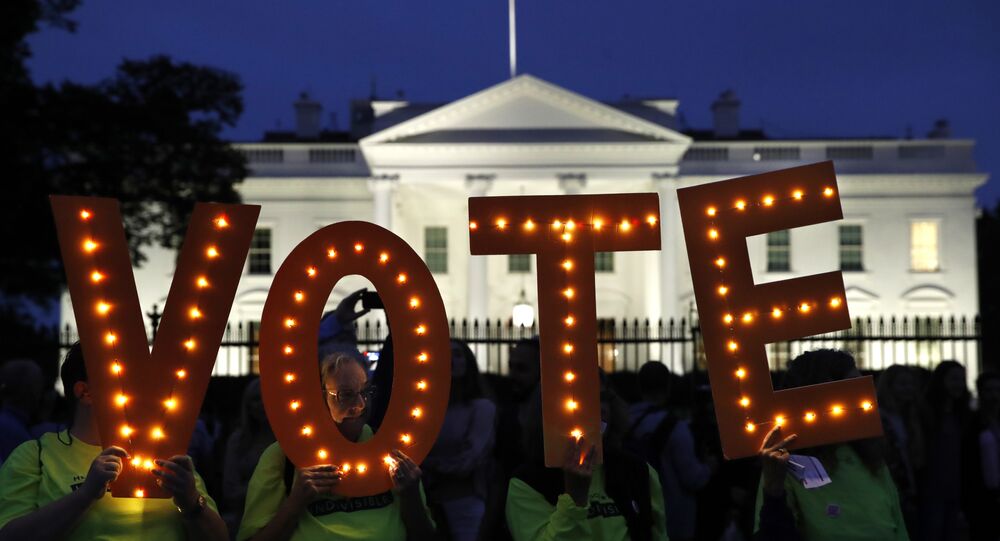 If Trump Keeps Going With Agenda, Every Country Will Do Well - Arizona Candidate

Midterm elections in the US will be held on Tuesday, November 6. Sputnik spoke about it to Wendy Rogers, Republican candidate for Arizona's 1st Congressional District in the US House.

Sputnik: What is your take on the elections outcome?

Wendy Rogers: I think Republicans keep the Senate and control of the House will be close. Seats like mine will determine the outcome. Should we win, which I think we have a great chance of it, we pick up a seat that was supposed to be Democrat.

Sputnik: This year's elections are expected to hit a 50 year record turnout rate for midterm elections, why is that?

Wendy Rogers: There is a lot on the line. Much like the Presidential election of 2016. You can have a pro-America pro-jobs Republican agenda, or an open borders high tax Democrat agenda. It doesn't get any clearer than that.

© AFP 2021 / ORLANDO ESTRADA
Blowback: How US' Latin American Policy, Midterms Facilitated Migrant Caravan
Sputnik: Why are these elections important not just for the US but for the world?

Wendy Rogers: Because if President Trump is allowed to keep going with his pro-jobs agenda, every country will do well. I haven't seen any rockets flying over Japan lately. ISIS isn't killing innocent people lately. These are good things for the world.

Sputnik: What consequences can these results have on US relations with countries like China and Russia?

Wendy Rogers: We shall see. The more help we can get President Trump, the better.

Wendy Rogers: I can tell you, Russia isn't interfering in Arizona's 1st district. I haven't seen any Russians.

Sputnik: What changes can we expect to see in Donald Trump's domestic and foreign policies if any?

Wendy Rogers: If Republicans keep the House of Representatives, look to see an even stronger United States economy and a stronger military.

Sputnik: According to reports the Democratic candidates have hauled unprecedented funds for the midterm elections: If Democrats win- was the funding the main reason behind the victory or where there other factors that impacted the results? If yes then what were they?

Wendy Rogers: They definitely have a fundraising advantage, mainly from left-wing billionaires like George Soros, Tom Steyer, and Michael Bloomberg. In the end of the day it will be about voters and the future of America. Voters are smart, they don't always believe what they see on TV.

Sputnik: If Democrats lose: despite these funds the Democratic party still suffered a loss, in your view what were the main reasons for that?

Wendy Rogers: The American people will have told the politicians they want more of what we have had in the last 2 years. Secure border, less regulation, less taxes, more jobs, and more common sense.

Anticipating Mueller's Findings for After Midterms