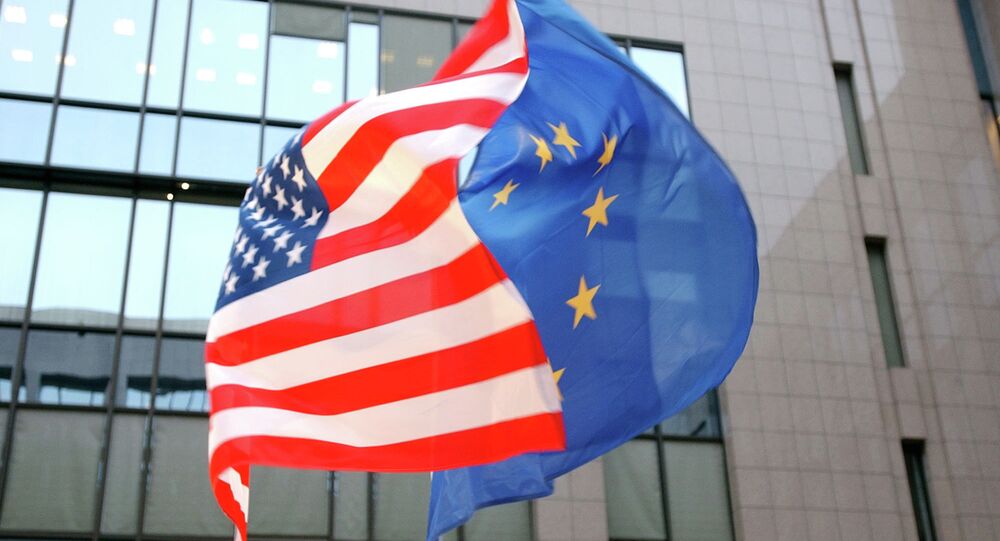 Trump recently said that the European Union was created to take advantage of the United States and accused the bloc of doing precisely that. Sputnik discussed Trump's statements with Srdja Trifkovic, a Serbian-American writer on international affairs and foreign affairs editor for Chronicles magazine.

Sputnik: In his interview with CBS, Trump said that the EU was established to take advantage of the US and that is what the block is doing. How much truth is there in this statement?

© AP Photo / Peter Dejong
Four Chinese Initiatives Paving the Way for EU Free Trade Amid US Tariff War
Srdja Trifkovic: If you’re looking at the early days, it started as the European coal and steel community and its primary purpose was to facilitate the movement of goods and services within the core of six regional countries and this was done with the explicit blessing of the United States, of the Truman and Eisenhower administrations, back in the early 1950s. Now if you’re looking at the establishment of the European Union as it exists in its present form, specifically since the Lisbon agreement was signed, when the current institutional framework was created, then there may be some truth to it. Because in reality it has behaved over the past two decades like a trading block ready and willing to take advantage of the very open US market while inciting all sorts of subtle or not so subtle protectionist clauses into its own trading group. Also, we need to bear in mind that very often European products have an built-in subsidy which is not directly visible, it is not like a subsidy that goes straight to the manufacturer or to the farmer but it goes via circuitous routes so that very often it’s hard to tell what is the percentage of built-in subsidies from Brussels which have found a way, for instance, through the French Ministry of Agriculture, coming from European funds and making French cheese, for instance, more competitive than it otherwise would have been.
© Sputnik / Maksim Blinov
EU Energy System to Collapse if US Sanctions Affect Russian Oil and Gas Companies – BP Head
Sputnik: Now we know that in the summer the United States and the EU agreed to tone down the trade dispute, I think that was after a meeting in the White House between Jean-Claude Juncker and President Donald Trump, but what do you make of Trump’s latest comments about the EU hostility towards the US and what message does this send out?

Srdja Trifkovic: First of all, when it comes to Claude Juncker, the question is whether he has had his morning drink before the meeting and that would be a trivial offence; personal chemistry works better depending on Claude Juncker's own level of inebriation, but seriously speaking, I would respond that Trump has always had a certain Eurosceptic view and I think it is well in line with his sovereignist principles. During the election campaign, he did make skeptical statements and he even received Nigel Farage of UKIP in Washington and so on, because he believes that the European Union is effectively a globalist cabal in which deracinated elites, alienated from their own nations, are finding much more in common with each other then with their own people. To some extent I think this is a perfectly justified assessment, because if you look at the way Brussels is trying to treat, say, Hungry, Poland, Slovakia and the Czech Republic on the issue of migrant quotas, which of course those countries are rejecting, we see that the attempts by the European Union to play the arbiter of social and cultural norms has gotten out of hand, and in that sense I think that Trump wouldn’t be able to articulate the issue in quite the same terms, but this is nevertheless his instinct. Trump went in the right direction when we remember his statements from 2016 and when we bear in mind that, of course, for most leaders of the European Union was the election was the equivalent of a global catastrophe, for instance, the German Chancellor, Angela Merkel, could barely conceal her disdain and her shock. So no doubt that Jean-Claude Junker and the rest of the Brussels nomenclatura would’ve been infinitely more comfortable with Hillary Clinton in the White House, but at the same time, I think when push comes to shove, there will be some give-and-take because at least with the European Union we’re not looking at a potential existential geopolitical foe of the United States as we are in the case of China, where escalation of the trade war is accompanied by an escalation of geopolitical rivalry in the South China Sea and elsewhere.

Ex-EU Adviser: Gravity of US Charges Against China Not Matched by Details