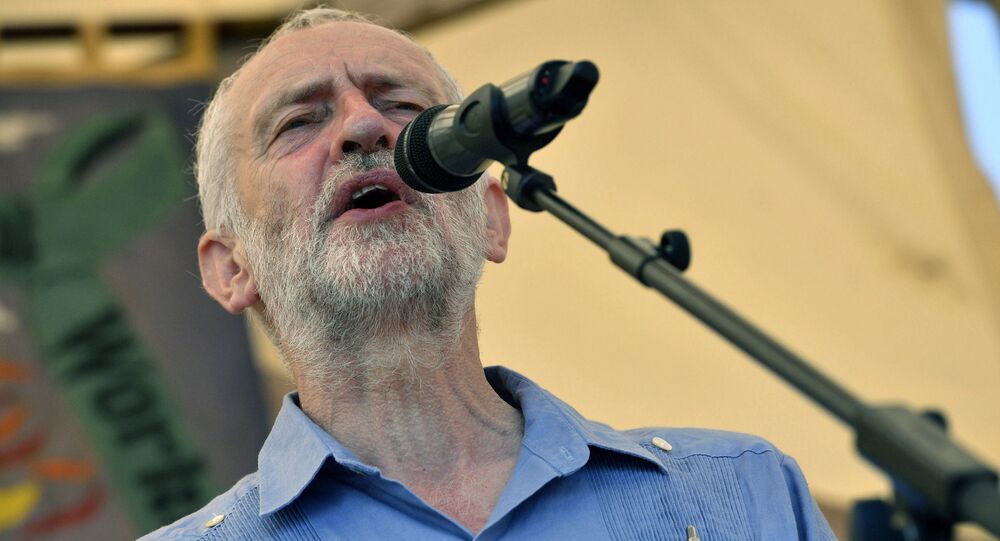 Sputnik spoke to David Miller, Professor of Political Sociology at the University of Bristol on how and why MI5 and MI6 may be undermining Jeremy Corbyn.

Sputnik: What do you make of Andrew Murray’s suggestion that Jeremy Corbyn is being undermined by the security services to prevent him from coming to power?

David Miller: It’s obvious the intelligence services are attempting to undermine Jeremy Corbyn – they attempt to undermine any progressive movement in this country and always have done. There are plenty of historical precedents we can mention as I’m sure people have. But just to look at the most recent examples, the ex- head of MI6 and the current head of MI5 have indicated that they take a dim view of Corbyn. I can also point in particular to an article in the Telegraph the week before the election last year by Hamish De Bretton-Gordon, the chemical-biological weapons expert denouncing Corbyn and saying that his election would be a gift to our enemies. Now De Bretton-Corbyn as we have shown is an operative for MI6. He’s not a staff member of MI6 but he works very closely with MI6 in Syria trying to create evidence of chemical and biological weapons’ attacks. You can have clear evidence of the intelligence services trying to undermine Corbyn.

David Miller: Well a key example of the intelligence services manipulating the possibility of a Labour government goes way back to the early 20th century with the Zinoviev letter which was leaked to the press. And that’s the key way in which the intelligence services undermine progressive movements is that they leak, quite often fabricated material, but certainly distorted material to the press; and that is then used as a stick to beat progressive movements. We’ve seen that most recently with many stories and his alleged links to Communism, links to the Czech spy, all this kind of nonsense based on non-information or false information; that’s fed to journalists which they then repeat as if they’ve done some fantastic investigative journalism. This is not just a question of a standard pattern of leaks, it’s also an institutionalized arrangement whereby every newspaper including also broadcast – every media outlet in the mainstream in the UK has a specific person whose job it is to cultivate their contacts in MI5 or MI6 or other intelligence services and they are the ones who quite often spill the poison from MI6 or MI5 into the press. We heard stuff only this morning from the BBC from their correspondent who faithfully retells MI5 or MI6 briefings about the Russians or about the latest daring do from alleged Russian intelligence. These are things which happen every day, these are a institutionalized set of relationships. I mean the stuff you get in The Times; The Times most recently has been a key place for launching intelligence services’ hit jobs of people who are critical of the British government and of British policy.

© AFP 2021 / JOHN D MCHUGH
'Show Me Your Papers': Corbyn's Aide Accused of Not Having Security Clearance
Sputnik: What exactly is it about Jeremy Corbyn that poses such a threat to the establishment?

David Miller: Well Jeremy Corbyn is a challenge and a threat to vested interests. He says that. And what anyone thinks of Corbyn – however radical one thinks he is or isn’t (I think he’s a fairly mild democratic socialist) he is a genuine threat to those interests and of course they will not accept that kind of threat. They’re not democrats; they never have been democrats and they have a powerful and unaccountable role and any government which tries to democratize our society, including make the intelligence services accountable to and subject to democratic controls will be challenged by the intelligence services. Not only the intelligence services of course, we can see there are other ways in which they can be challenged elements in the military etc. It is the same in some other countries but there have been times in history for example in the US when the intelligence services over-reached and there was significant push-back against them and control over the kind of covert operations which they could undertake. We are certainly in a place now where there is desperate need to bring the intelligence services under control and make them accountable and responsive to democratic control. They currently are not at all. And so it’s a perennial problem of the kind of states that we live in – neo-liberal, capitalist states – but it’s a problem which if we want any kind of progress in our society then we will have to face.