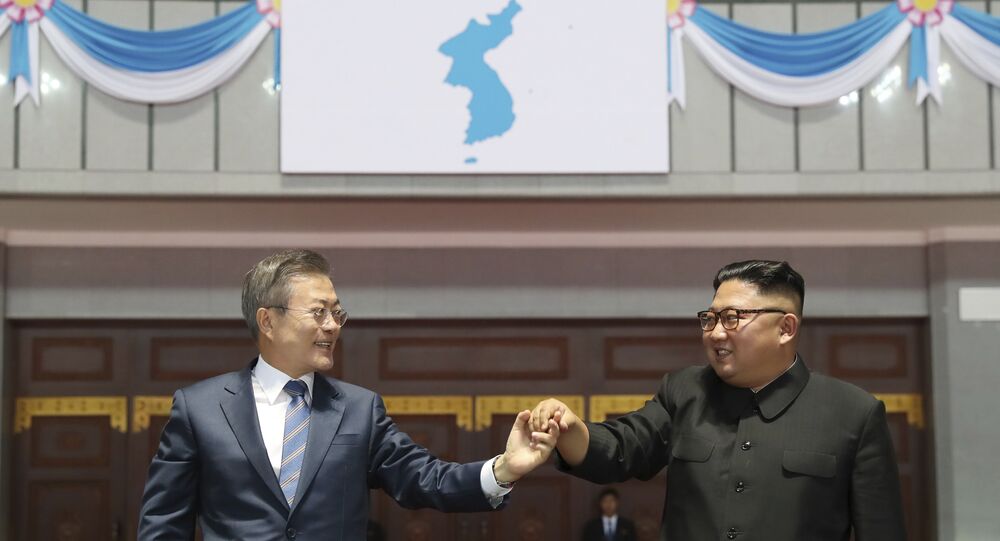 DPRK and South Korea signed a military agreement and a joint statement on Wednesday, in fact proclaiming the end of the state of war, according to the South Korean presidential spokesperson. Sputnik spoke to Justin Arnold, an independent researcher on North Korea and former communications specialist for 38 North for more on the situation.

Sputnik: What hopes does this agreement between the two Koreas raise in terms of the stability on the Peninsula?

Justin Arnold: I don't really like to predict the future, but it seems like the two Koreas are getting along pretty warmly right now. North Korea's big issue is of course sanctions, then oil, and then humanitarian assistance. The big wildcard is the United States — can Donald Trump just go for the photo-ops, smiles and handshakes without realizing he's getting nothing in return from North Korea? If he can do that, then North Korea has basically won. If not, we may return to a situation like we saw back in mid-2017, which is something I think both Koreas want to avoid.

© AP Photo / Luca Bruno
Trump Welcomes Home Remains of 2 US-Korea War Soldiers for Burial
Sputnik: What are your thoughts on the longevity of the apparent warmth between Seoul and Pyongyang?

Justin Arnold: It's going to depend on the South Korean administration. The North Koreans are keenly aware of how the relationship can turn on a dime; look at what happened after Roh Moo-hyun (a liberal) ceded power to Lee Myung-bak (a conservative). But also, when Kim Dae-jung ceded to Roh Moo-hyun, and the policies were roughly the same, the relationship was quite warm.

So it's really going to depend on who succeeds Moon Jae-in when his term expires. A few months ago I would think his party would romp, now I'm not so certain.

The question after that becomes: if the conservatives regain power in the ROK, how does Kim Jong-un react? Does he break from his father and try to forge a bond through common ancestry, or does he go the way he did with Park Gyeun-he, where she was denounced as a criminal and traitor? There's a lot of variables that no one can predict.

Justin Arnold: I don't honestly know where this administration stands on a lot of these issues, and that's not for want of trying to figure it out. Pompeo says one thing, Trump says another, chaos reigns. It also depends on what you mean by "normalization" — does that mean the end of the war, like North Korea wants? Does that mean resumption of humanitarian aid? Does that mean that Washington looks the other way as North and South Korea figure it out? Normalization means a lot of things to different actors in this region, and no one's actually sat down together to talk out what that means.

As for your second question, there's already been stalling in the talks. The new Special Envoy, to my knowledge, hasn't met the North Koreans. Joseph Yun was the most plugged in person with regards to the DPRK and he's gone. Where's the New York channel? Has there been backchannel talks? I'm honestly not sure. I think that South Korea will forge ahead regardless of what the US does. This is a personal thing for Moon. He wants peace on the peninsula. I'm sure he's keeping the United States informed, but he and KJU are the main drivers of this.

© AP Photo / Pyongyang Press Corps Pool
Endeared Leader: Kim Reportedly Sends 2 Tons of Pine Mushrooms as Gift for S Korea's Moon
Sputnik: What does the progress made in inter-Korean talks mean for US-North Korean dialogue? What move could be expected from Kim and Trump now?

Justin Arnold: I know there's been talk about a second summit and setting it up, and part of Moon's trip to Pyongyang was to jumpstart the US-DPRK talks. I don't foresee something happening before UNGA, but possibly later this year there might be a second summit between the two leaders. I'm sure the ROK will debrief the US side as soon as they get back to Seoul, and that might inform what the next steps will be. I wouldn't be surprised if they return with a letter for Trump from KJU, too.

However, the agenda is going to be driven by the North Korean side again. I think what would be expected would be a photo-op, some grandstanding, a vague statement that minorly builds upon the already vague Singapore Summit Declaration, and everyone goes home happy and doesn't actually deal with the issue at hand, which is of course the nuclear issue.

I would expect that Kim Jong-un would also relay his insistence that the US side does something in exchange for the dismantling of Yongbyon. Whether that's lifting sanctions, less maritime interdictions, I don't know. But KJU clearly knows how to flatter Trump and get what he wants, and he's only learned since June.