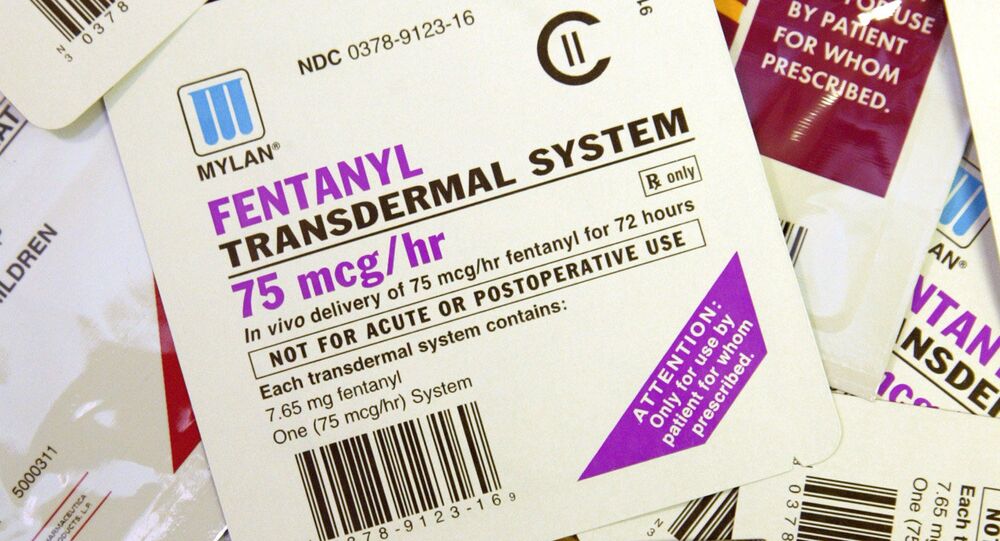 Websites based in China are selling the dangerous opioid fentanyl and others drugs to users and dealers in the UK Both drug dealers and users alike, are buying the potentially lethal substances with ease through Chinese eBay-style websites.

Sputnik spoke to the Author, Former Undercover Police Officer and Chair of the UK Law Enforcement partnership — Neil Woods for more insights on the issue.

Sputnik: Neil, how significant is it that individuals in the UK can access these powerful drugs with such ease in the same way they would buy items on eBay and Amazon?

Neil Woods: We’ve seen the rise of Fentanyl in the United States — it’s been around for quite a few years and many people in the US and Canada have died as a result; we’ve seen in the last year, particularly the last 12 months, its creeping into the UK heroin market.

It’s no great surprise that it’s being sold so overtly but trying to clamp down on the overt market is not going to make a lot of difference because dealers have been buying Fentanyl from the Darkweb for some time to use as an adulterant to make their heroin stronger and more competitive.

© CC0
456 Died in English Hospital After Given Opioids With No Medical Justification - Inquiry
Sputnik: Now Neil, being a former undercover police and expert in how drug dealers operate –you know as well as I this isn’t a new thing. With the creation of web portals like the Darkweb and websites like the Silkroad and Alphabay, essentially anyone can become a drug dealer with very little ease. What difficulties do law enforcement bodies, nationally and internationally, face in stopping and shutting these websites and operations down?

Neil Woods: The problem is you can shut one down and another one will rise — it really is whack-a-mole. You can’t control this. There is no controlling the illicit drug supply in any nation or internationally with prohibition.

You have to get a control of the situation by regulating the market. There isn’t really a separate market for Fentanyl; it’s used as an adulterant for the massive and valuable heroin market. Traditionally, in the UK, heroin is only adulterated at the point of import and used to be only adulterated with caffeine and paracetamol and then after import it is very very rarely adulterated because there is so much competition and people don’t want to buy low quality gear.

© CC0 / Pixabay
Over-the-Counter Pain Pills Just as Potent as Opioids in ER Patients - Study
This has changed completely with the advent of Fentanyl because what gangsters can do now is they can adulterate the drug further down the chain with all sorts of different things but then bump up the strength again to make it a competitive product, by importing fentanyl over the internet.

Fentanyl is so strong, it’s a 100 times stronger than heroin, you can import some in an envelope or a package and adulterate an enormous amount of heroin with a small amount of powder. We are now getting increasingly unpredictable strengths of heroin and this is causing an increase in deaths and will get worse.

Sputnik: Should ministers and politicians be worried about the ease that people are peddling and pushing these incredibly dangerous and risky substances into and across the UK? Are we, the UK, as a nation prepared for it and what sort of policies should we be seeing from the government to prevent these substances flooding in?

© AP Photo / Jacquelyn Martin
UK Fentanyl Gang Sold Deadly Drugs on Darkweb to Customers All Over the World
Neil Woods: It’s time for policy makers to face up to the face that, fentanyl aside, it’s very easy to deal drugs and people can get whatever drugs they want. It’s ridiculous to try and control this with more enforcement…

The evidence of the last few decades show that this is a failure. With record drug deaths, it’s time to have a different direction all together – we have to treat this as a health issue. If we looked after problematic heroin users in the way we used to look after them in Britain, and believe me we used to lead the world in drug policy in the UK, if we go back to way we used to do it and care for people instead of imprisoning them and persecuting, then the drug dealer will go away because there market will go away.

In the UK we used to have something called the British System, which was sort of the last resistance for American style prohibition and it worked. It just meant that we looked after people, if someone had a problem with heroin, they could get it prescribed from a doctor but it didn’t spread like an epidemic because there was not incentive to sell heroin to feed someone’s habit. If we go back to that system, we will end the power of organized crime in relation to heroin.

Views and opinions expressed in this article are those of Neil Woods and do not necessarily reflect those of Sputnik.