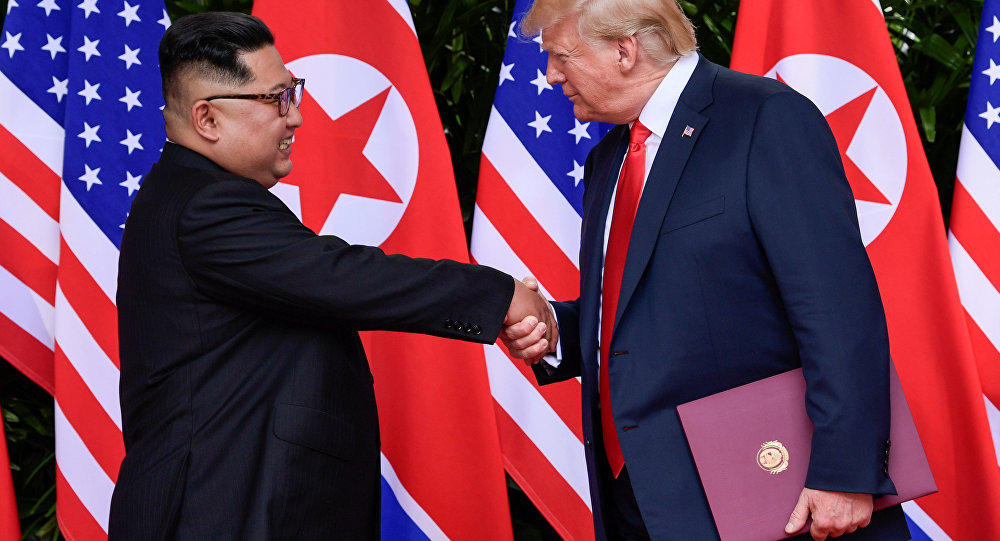 One day after Pompeo announced he was scheduled to visit the North Korean capital for the fourth time, Trump sent out a series of tweets on Friday, calling off the trip, and accused China of not offering enough help to push forward sufficient progress toward denuclearization on the Korean Peninsula.

© REUTERS / Susan Walsh
US Failing to Keep Up Its End of North Korea Bargain
A new letter from Kim Yong Chol, vice chairman of North Korea’s ruling Workers’ Party Central Committee, carrying a confrontational message reportedly became the last straw that led to Trump and Pompeo deciding to cancel the next round of peace talks with Pyongyang.

Unlike the confidence Trump demonstrated after his historic summit with Kim Jong Un in Singapore in June, the US president for the first time acknowledged publicly the difficulty in convincing the North Korean leader to give up his nuclear arsenal.

As Pyongyang has not taken substantial and concrete actions toward denuclearization since the Singapore summit, Trump could have decided to postpone the negotiations based on the belief that North Korea is more vulnerable to delayed peace talks because it continues to suffer from strict economic sanctions, political analysts suggested.

"Does Trump have any strategy against North Korea? Maybe he does. He believes it is North Korea that is being punished more by not making any progress toward denuclearization, as most of the economic sanctions, especially unilateral US economic sanctions, are still in place. He believes North Koreans have more to lose," Kim Jae-chun, an international relations professor at Sogang University in Seoul and a former South Korean government adviser, told Sputnik.

In response to the rapid progress of North Korea’s nuclear arms program last year, the United Nations Security Council (UNSC) passed a series of tough economic sanctions aiming to cut off the financial resources used to support the development of nuclear weapons.

Other North Korea watchers pointed out that Trump could also be trying to leverage Kim Jong Un’s ambition to attend the upcoming UN General Assembly in New York City in September, by putting more pressure on the North Korean leader and forcing him to offer more concessions in the peace talks.

"I suspect that Trump believes Kim Jong Un is very eager to attend the UN General Assembly in September. It would be a great diplomatic opportunity for Kim Jong Un to deliver a speech at the UN and be treated as equals among other world leaders. If Kim Jong Un wants to go there in September, it means he needs to improve relations with the United States substantially before that. Trump is probably betting on Kim Jong Un’s eagerness," Zhao Tong, a fellow in Carnegie’s Nuclear Policy Program at the Carnegie–Tsinghua Center for Global Policy in Beijing, told Sputnik.

Both experts believe that Kim is likely to offer concessions to the United States in the future, to make sure the diplomatic efforts he initiated at the beginning of the year could move forward.

© AP Photo / Korea Summit Press Pool
S Korean President May Encourage Kim to Negotiate With US - Reports
Trump highlighted ongoing trade tensions with China as a reason behind the lack of progress on denuclearization negotiations with North Korea, which relied heavily on trade with Beijing as a key source of revenue.

As hostility between Beijing and Washington continues to grow in recent months amid a bitter trade dispute, North Korea could stand to benefit from the rising rivalry between China and the United States in the region, Zhao from the Carnegie–Tsinghua Center for Global Policy suggested.

Zhao added that North Korea will likely try to strike a balance between its relations with China and the United States.

"The strategy for Pyongyang is very clear, which is to maintain balanced relations with both of the two great powers. North Korea could use these two countries against each other. When facing threats from the United States, Pyongyang could move closer to Beijing to cause concerns in Washington. When having problems with China, Pyongyang could become friendlier with Washington to make Beijing worried," he said.

The expert pointed out that China invited Kim for his first visit in March right after Trump agreed to meet with the North Korean leader, following historic lows in bilateral relations in recent years amid rapid progress of Pyongyang’s nuclear programs.

Chinese President Xi Jinping is expected to visit Pyongyang for the first time in September and attend the National Day celebrations in North Korea, according to South Korean media.

© AP Photo / Susan Walsh, Pool
US Claims About China Impacting Talks With N Korea 'Irresponsible' - Beijing
Shortly after Trump sent a letter in late May to cancel the proposed first historic summit with Kim, South Korean President Moon Jae-in held a surprising second summit with the North Korean leader, which was viewed as the key to saving the Singapore summit.

From delivering Kim’s message expressing his willingness to meet with Trump in March, the South Korean president has always played the role of a mediator between North Korea and the United States. Moon is expected to hold a third meeting with Kim in Pyongyang in September.

Professor Kim from Sogang University warned that Moon should avoid pushing forward inter-Korea cooperation too aggressively, which could undermine the alliance with the United States.

"Once the end of the Korean War is declared, Moon could request North Korea to provide a detailed list of its nuclear arsenal. But with or without a pledge from Pyongyang, I’m under the impression that Moon would try to push forward inter-Korean economic cooperation projects, which will undercut the US position toward North Korea," he said.

The South Korean scholar explained that Moon probably believes that if both Koreas can co-exist peacefully, North Korea could retain its nuclear weapons as they do not pose any threat to South Korea anymore.

"I’m sure Moon wants to create some independent diplomatic space away from the United States," he said.

The expert added that South Korea could face punitive measures from the United States if the Trump administration finds South Korean policies to be going against the US stance on North Korea.