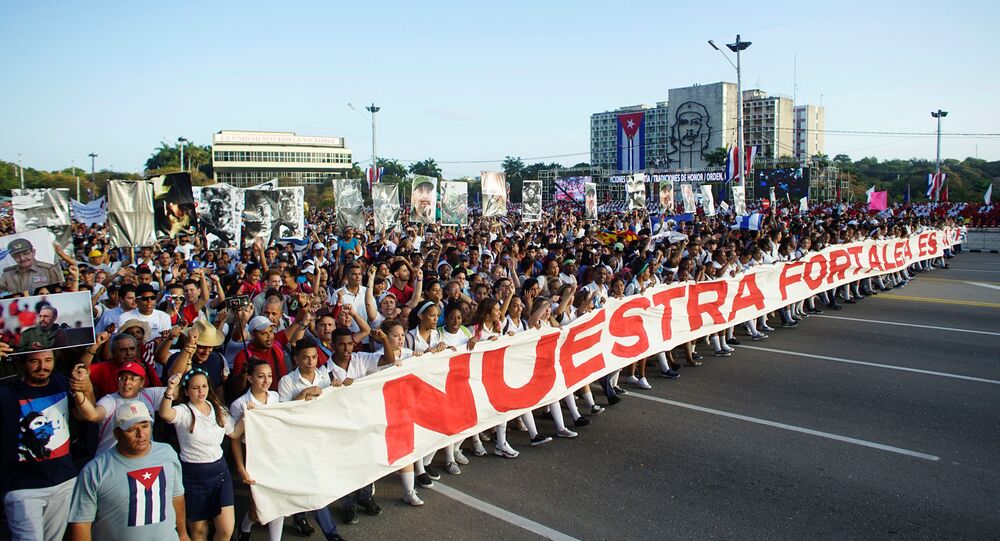 According to media reports, Cuba’s Communist party is prepared to amend the nation's constitution. Their version of the document will keep the ruling Communist party as the only legal party but will eliminate a reference in the current document on reaching utopian communism.

Sputnik discussed this with Ted Henken, Associate Professor of Sociology and Latin American Studies at Baruch College, part of the City University of New York.

Sputnik: What’s your take on Cuba’s proposed new constitution? What changes are we most likely to actually see?

© Sputnik / Oleg Lastochkin
Cuba's New Constitution May Limit Presidents to Serving Two 5-Year Terms
Ted Henken: I think this change reflects the passing of the Castro generation, both Fidel and Raul, Fidel having died and Raul having stepped aside. He [Raul] has engineered this new constitution. He is really the head of the committee that is writing it, even though he is no longer President.

The idea, I think, essentially is to try to assure the generational renovation of power but keep power within the Communist Party, which will remain the sole legal political party in Cuba; but also to try to decentralize some of the administrative duties. It might not be the sharing of power but the sharing of administrative duties, because in the past things were really concentrated in the personality, first of Fidel, and then of Raul.

Sputnik: What, in your opinion, are going to be the changes that ordinary Cubans are going to see in their lives? Will there be any significant changes?

Ted Henken: In terms of everyday life I would say that the changes are marginal although they're not non-existent. I would say that probably the bill in terms of actual impact on people’s life, it remains to be seen how this will be operationalized when the constitution is approved, probably early next year.

I would say the market mechanism recognizing private property depending on how far they go in recognizing that; will that include legal protections for the existence of private businesses, small and medium-sized enterprises; they will have a legal personality that will allow them to import and export, sign contracts, they will open up bank accounts.

© AP Photo / Alexandre Meneghini
Cuba's New President Expected to ‘Deepen the Revolution'
That is a big question because recently we saw the government issue a new set of rules for the existing private businesses that really aimed to control, keep them in line, look over their shoulder to make sure that nothing of black market is entering and they can’t really compete well against the state-owned enterprises which will remain the dominant sector of the economy. The economic rights issue is probably the biggest change in this constitution.

The political rights are really non-existent; there’s no real change in that area. There’re only very marginal civil rights changes. I would say that the other issue probably is the term limit for the President and the maximum age of 60 to become President. We’ll see a gradual controlled increase in micro-enterprise but the government has explicitly outlined the concentration of wealth and the concentration of private property. They’re going to allow some version of property to function but they don’t want it to concentrate.

There’s a big political issue about the middle class that could challenge the basic political orientation of the country. We’ll see marginal changes, we’ll see headlines like ‘Cuba approves private property’ but the devil is in the details – how many real rights will these people actually have in their daily life? I think it’s much more continuity, it’s an administrative change and it’s directed by the people who've held power for the last 60 years. It’s not directed by any upstart dissident opposition.

This new constitution is being made from the top and from the people who already have power. They’re going to try to ensure that it allows them to transition, to be more flexible, to be less rigid but to maintain power and maintain the system as they had it.

© REUTERS / Oswaldo Rivas
Cuba is Changing Its Politicians but Not Its Politics – Observers
Sputnik: Can you tell us about the makeup of the Communist Party? We know about the Castro legacy but are there any other significant politicians that could take on a leadership role in Cuba?

Ted Henken: The new President is 58 years old; he is almost 30 years younger than most of the people who have power. His name is Miguel Díaz-Canel. But he is a party stalwart who rose very slowly through the ranks over the last 20 years. He had been serving as Vice President for the last 5 years so he was no surprise. Some people expected him to be some kind of an innovator after he took power, but so far he has really shown a face of continuity, praising the former leaders and instituting policy that they already developed.

And also the government and his Cabinet kept on a number of people who are 'historicos', the people of the historic revolutionary generation. One important change has to do with gender and ethnic and racial composition.

There’s much more representation of women at high posts, they had five Vice Presidents and three of them are women and there are two Afro-Cubans in that group. The final thing that is important for many Cubans in their daily lives is the recognition of marriage equality, sometimes called gay marriage, the redefining of marriage in Cuba as an agreement not necessarily between a man and a woman.

© Flickr / Chris Pawluk
Surprise: How CIA Agents in Cuba Turned Out to be Castro’s Intelligence Officers
Sputnik: What kind of foreign involvement or partnerships do you think that we can expect?

Ted Henken: Cuba is really caught in a bind. They have recognized publically numerous times that they very desperately need foreign investment.

They have written two foreign investment laws; one didn’t work so well back in the 1990s, they rewrote it a few years ago. But they still have a very anemic ability to attract foreign investment because many of the companies that do business in Cuba find that they are very rigid and very controlling. And in the new constitution they recognize their need for foreign investment.

But whenever Cuba turns to actual speeding up the process of attracting more investment and having that really have an impact, there’s a lot of foot dragging, resistance for change and resistance to decentralizing power. So, that’s certainly on their wish list but it remains to be seen whether that would actually work.

Sputnik: Do you think that the US’s relations with Cuba will improve?

Ted Henken: No. I don’t think that we can expect any kind of improvement of the relations.

I think that one thing that is true is that even though Donald Trump has tried to show a major shift between him and Obama vis-à-vis Cuba, a lot of this shift has been more rhetorical and symbolic than actual and there’re a number of things that Obama achieved that remain in place

Views and opinions expressed in this article are those of Ted Henken and do not necessarily reflect those of Sputnik.