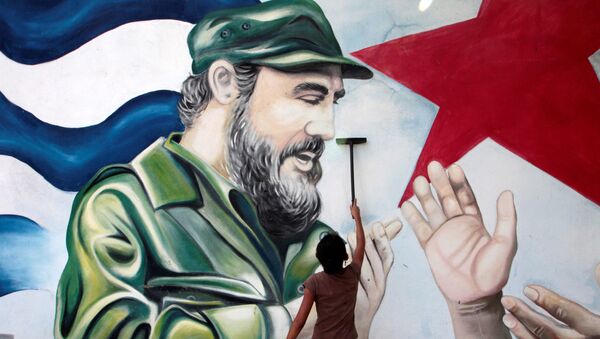 Instead of preaching to others about the alleged flaws in their electoral systems, Washington should focus on its own internal politics, observers told Sputnik, commenting on the White House's critical remarks towards the newly elected Cuban president, Miguel Diaz-Canel.

State Department spokesperson Heather Nauert's remark that the Cuban leadership transition is "of great concern" to the White House is nothing new, Mateo Grille, editor of the Uruguayan magazine Caras y Caretas, told Sputnik Mundo, explaining that this is a "standard expression" used by the US "before every election that challenges the American vision."

"The famous generation that created Cuba has long retired, for obvious biological reasons [age]," Grille said. "Now there are an incredibly large number of women and young people among the 605 deputies elected to the National Assembly, who will bring their new vision to the work of the National Assembly. But this will not affect the vector of development."

After six decades of Castro rule on April 19, former First Vice President Miguel Diaz-Canel was confirmed by the Cuban National Assembly's 605 deputies as the country's new president. A day earlier, Cuba's election commission nominated Diaz-Canel as the only candidate to succeed Raul Castro, 86, who has been at the helm of the state since 2006.

Miguel Diaz-Canel Becomes Cuba's New Leader, Vows to Continue Revolution
The Cuban Constitution of 1976 established a parliamentary form of government: the head of state and government is appointed by the people's National Assembly. This is the supreme body of state, whose members are elected every five years by the country's population. The ninth convocation of the National Assembly began its work following the March 11 elections.

Commenting on Washington's "concerns," Grille referred to the 2016 US presidential elections which resulted in Donald Trump's victory, despite the fact that more Americans voted for his political opponent Hillary Clinton. In this model, the votes of the population are not important, but the number of voters by state, which does not guarantee a democratic process at all, the journalist pointed out.

In addition, one should take into account "the fictitious struggle between the US two parties," which in fact pursue the same political course and differ only by the amount of money collected during their election campaigns, he stressed.

Washington's "great concerns" make a strong contrast to the Cubans' absolute calm, as the transition of power in the country occurs in a natural way, Grille remarked. According to the journalist, "power in Cuba comes from the people, not from corporations and not even from the Communist Party."

For his part, political analyst Arturo Lopez-Levy, an American of Cuban origin, believes that the US should pay more attention to international human rights laws.

"In this sense, both Cuba and the United States have much to strive for, like most states," Lopez-Levy said. "It would be much more meaningful if the US ceased to promote its political system as an exemplary model."

'Cuba's Task' Is to Balance Out its Economy on the Way to Capitalism - Analyst
The political analyst emphasized that, just like the US, Cuba has the right to exercise its own political system.

April 17-20 is symbolic for the Cubans: Exactly 57 years ago, the CIA-sponsored Brigade 2506's Bay of Pigs Invasion failed due to the courageous resistance of the Cuban Army and militia. The US operation envisaged the creation of a foothold on the southern coast of the island and the establishment of an alternative government there, which would be recognized by the international community.

Miguel Diaz-Canel, who was born a year before these historical events and who is turning 58 on April 20, is one of many Cuban leaders, who do not belong to a generation of revolutionaries, but who have occupied key positions  in the country for many years. However, he will be the first of them who has climbed to the top position in the state.

Although Raul Castro, 86, is stepping down, he will remain in charge of both the Cuban Communist Party and the country's armed forces.