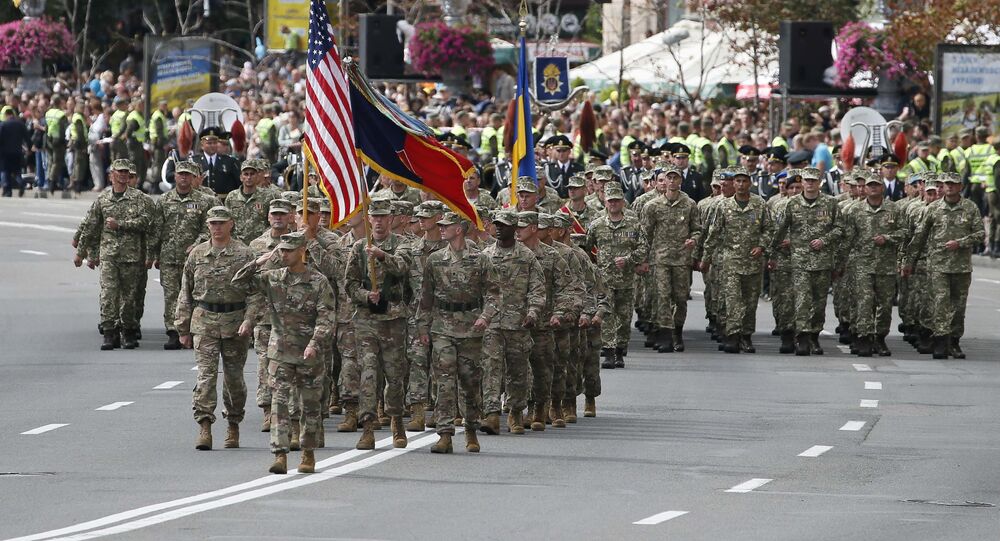 MOSCOW (Sputnik) - The United States is unlikely to ignore the alleged supplies of Ukrainian aircraft engines to China, and might in this regard use this issue as an instrument of political pressure on Kiev and freeze its program of military assistance to the country, experts told Sputnik on Friday.

On Wednesday, The Washington Times newspaper reported that the Ukrainian Motor Sich company had supplied China with 20 jet engines for 12 JL-10 jet trainers. The Ukrainian-Chinese contract, worth $380 million, provides for the deliveries of a total of 250 jet engines.

Neither Ukrainian authorities nor the Motor Sich leadership has commented on the reports so far, while many experts in the United States have not hesitated to classify the reported move as "betrayal" and a "stab in the back" arguing that Ukraine was receiving the money of US taxpayers. On Monday, US President Donald Trump signed the country's 2019 defense budget worth about $716 billion. The budget stipulates that the United States will allocate $250 million in military assistance to Ukraine in 2019, including in the deliveries of lethal weapons.

A representative of the Russian Centre for Analysis of World Arms Trade told Sputnik that in the light of the announced assistance, the US Congress will not fail to notice Kiev's motion.

"While the United States allocates $250 million in military assistance to Ukraine, Kiev by delivering jet engines is strengthening the military capacity of Beijing, which has been proclaimed as one of Washington's main military and economic opponents. It looks like a very interesting collision, which, I am sure, will not be left unaddressed by the Congress and Trump's administration," the representative said.

The expert suggested that such "political duplicity" might result in grave consequences for Kiev, including the suspension of the US military assistance to the country.

"[Ukrainian President Petro] Poroshenko is trying to milk all the world's major players regardless of taken obligations, and if the Congress takes responsibly the security of the US, then it has to halt allocation of money for Ukraine's armament and freeze the military assistance program to this country," he said.

Member of the Russian Presidential Council for Interethnic Relations Bogdan Bezpalko in his comments to Sputnik suggested that Washington could not have been unaware of the engines' deliveries to China and might use the issue in order to pressure the Ukrainian presidential candidates.

"It might be soft interference in the election campaign, in other words, a warning for the current Ukrainian presidential candidates to rely on the United States… I doubt that the United States was unaware of the deliveries to China. I am confident that they are well aware of everything that is going on in Ukraine. It is more likely a pretext," Bezpalko indicated.

Bezpalko agreed with the representative of the Russian Centre for Analysis of World Arms Trade and argued that the United States might resort to economic pressure and halt its assistance to Kiev in order to block the Ukrainian-Chinese deal.

© REUTERS / Gleb Garanich
Pentagon to Provide $200Mln to Ukraine in Security Cooperation Funds
He added that since the United States was the main beneficiary of the International Monetary Fund (IMF), Kiev should fear that the deliveries of jet engines to China might affect the IMF decision on the allocation of another credit tranche to the country. Bezpalko stressed that the case once again proved Ukraine's dependence on external political players and inability to make independent decisions.

The US 2018 defense budget, signed by President Donald Trump in December, allocated $350 million for security assistance to Kiev.