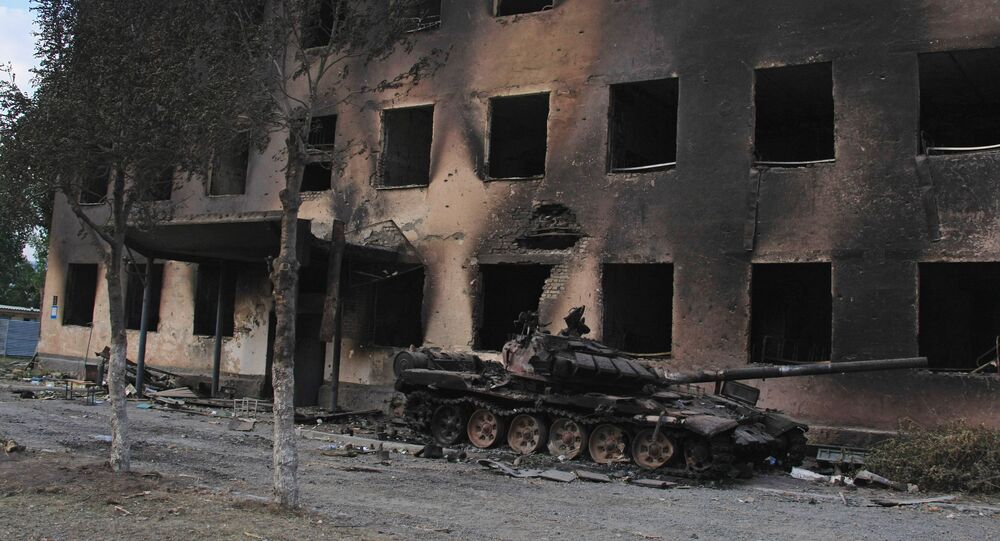 Five-Day War: Analyst on US Role in Georgia's 2008 Invasion of South Ossetia

Exactly 10 years ago Georgian troops invaded the South Ossetian city of Tskhinval after a massive artillery strike. The operation was authorized by then Georgian President Mikheil Saakashvili in a violation of the Sochi agreement of June 24, 1992.

"We still do not know what could be the reasons for the attack on the sleeping city of Tskhinval and the assault on Russian peacekeepers, which caused the deaths of dozens of Russian soldiers. President Saakashvili was convinced that Americans would help and Russians would not interfere," Israeli political analyst Avigdor Eskin told Sputnik, suggesting that the invasion could have been prompted by Saakashvili's bellicose stance and eccentricity rather than a well-thought-out plan.

© RIA Novosti . Vladimir Popov
'Sergei, Please, Hold Me, I'm Going to Faint': How Russia Recognized the Independence of Abkhazia and South Ossetia
In accordance with the Sochi agreement that brought an end to the Georgian-Ossetian armed conflict of 1991-1992 South Ossetia's security had been maintained by the Joint Peacekeeping Forces (JPKF), involving battalions from Russia, South Ossetia and Georgia.

Tbilisi's sudden attack on Russian peacekeepers deployed in Tskhinval prompted Moscow to kick off an operation to enforce peace on Georgia under the Article 51 of the UN Charter, stipulating the right of self-defense. The five-day conflict ended on August 12 while on August 15 Saakashvili signed a peace deal with then Russian President Dmitry Medvedev.

10 years ago, on the night of 7-8 August 2008, the Government of M.Saakashvili, having flagrantly violated intl. arrangements regarding peaceful settlement of the Georgian-Ossetian conflict, launched a full-scale military operation against South Ossetia https://t.co/MeznFzRLHD pic.twitter.com/57arGzBgi2

According to Eskin, although Washington was wooing Saakashvili at that time and helped the country build up its army, it did not push the Georgian president to an armed conflict with Russia.

"Then US Secretary of State Condoleezza Rice made special efforts to convince Saakashvili to refrain from any provocative action. She even asked then opposition leader Nino Burjanadze to keep an eye on Saakashvili so that he did not do anything harmful," Eskin opined, suggesting that "Washington played zero role in" the August 8 conflict.

However, on August 12, 2008, The New York Times dropped a hint that Washington had taken "a series of steps that emboldened Georgia" to adopt an assertive foreign strategy in an eloquently entitled article "After Mixed US Messages, a War Erupted in Georgia."

Speaking to the newspaper Kommersant on August 7, 2018 Prime Minister Dmitry Medvedev, who served as president of Russia between 2008 and 2012, also suggested that Washington had given hope to Saakashvili that they had the country's back.

"I think that by that time [Saakashvili had] had full-scale consultations with his patrons, primarily the United States. As you know, the then US Secretary of State Condoleezza Rice visited him. Before that, he had contacts with Mr. Daniel Fried, an expert on the Soviet Union… I think that Dick Cheney also visited Georgia at the time. In other words, everyone of importance had been to Tbilisi, which, I think, convinced Saakashvili that the Americans would support him in any situation," the Russian prime minister said.

After the military operation to enforce peace on Georgia, Russia gained the main thing, peace. We have protected our citizens who live in both Abkhazia and South Ossetia

​In the aftermath of the August 8 war, American and European politicians shied away from holding the Saakashvili government responsible for the aggression and blamed the conflict largely on Russia.

.@mfa_russia: The fact that it was #Georgia who launched the #aggression was officially confirmed, including in the report of the Independent International Fact-Finding Mission on the Conflict in Georgia, which was established by decision of the Council of the #EU. pic.twitter.com/U4L6oR28Ak

It appears that the lesson of the Tskhinval tragedy has not been learned by NATO, as the alliance's leadership has yet again pledged its commitment to admit Georgia, Eskin noted.

During a joint press-conference with Georgia's Prime Minister Mamuka Bakhtadze on July 18, NATO Secretary-General Jens Stoltenberg told reporters that it's up to Tbilisi "what kind of security arrangements to be part of," and criticized Russia for its opposition to Georgia's NATO membership.

Commenting on the matter, Prime Minister Medvedev stressed that Georgia's admission to NATO may have severe consequences.

"It is an absolutely irresponsible position and a threat to peace," Medvedev told the Kommersant. "Everyone knows about the internal tensions in Georgia, who believes that the neighboring territories, which we regard as independent countries, still belong to it… Can you imagine what would happen if Georgia were to join a military bloc? This could provoke a terrible conflict."

Eskin echoed Medvedev by saying that Georgia's moves toward NATO are fraught with risks and do not play into Tbilisi's hands.

"Georgia has been trying to join NATO for a dozen years at least," the Israeli political analyst said. "And this is not happening. Georgia has to give up any claims for Abkhazia and Southern Ossetia in order to join the alliance. The Russian military presence there makes any NATO presence impossible unless the territories are recognized by Georgia as foreign states. This is the paradox of Georgia-NATO relations. This is the reason for the strongest opposition to any move towards NATO by the leader of the Democratic Movement-United Georgia party Nino Burjanadze."

US to Boost Military Cooperation With Tbilisi

Thus, the latest 2019 National Defense Authorization Act (NDAA), passed by the US Senate on August 2, envisions "robust security assistance for Georgia, including defensive lethal assistance, to strengthen the defense capabilities and readiness of Georgia, and improve interoperability with NATO forces."

In addition, the legislation emphasizes the necessity to "explore increasing the frequency, scale, and scope of NATO and other multilateral exercises in the Black Sea with the participation of Ukraine and Georgia."

Finally, it affirms "support for the Open Door policy of NATO, including the eventual membership of Georgia in NATO."

However, Eskin hopes that the Trump administration will not take further steps to accept Georgia and Ukraine in NATO thus escalating tensions with Moscow.

"Ukraine and Georgia alike want to join NATO and to purchase US weapons. But the current administration is not going to provoke any tension with Russia and will not interfere in the relations between former USSR countries," he believes.

How Russia Recognized the Independence of Abkhazia and South Ossetia