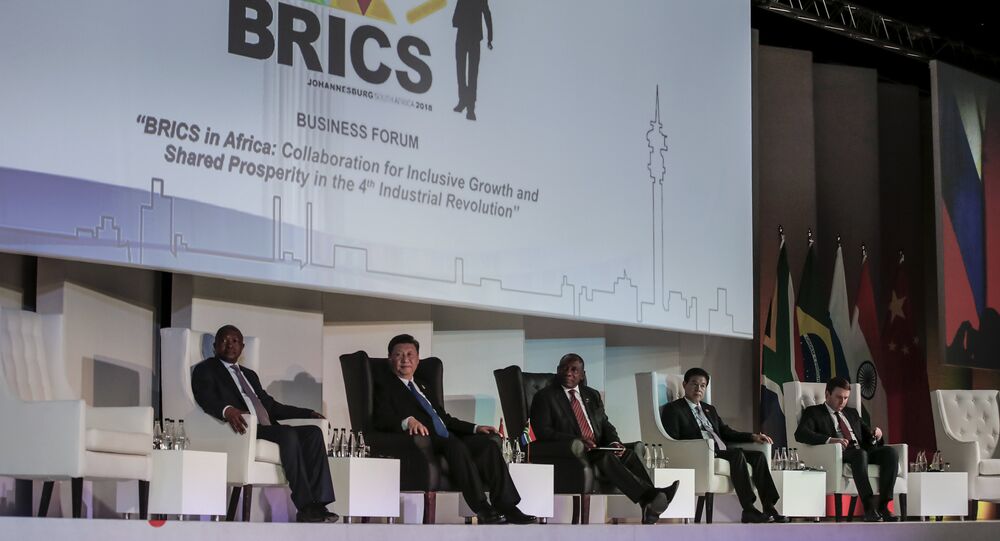 Sputnik: How important is participation in BRICS for South Africa and why? What opportunities does it present?

Lyal White: The summit and being a member of the BRICS is enormously important to South Africa. It carries huge significance in positioning South Africa as one of the leading countries of the emerging world, if you like, or one of the alternatives economies to look at. I think what many people say and I can say it as a South African sitting here and having followed the BRICS development over the last 10 years, South Africa is a lightweight among some of the heavyweights, and China is the ultimate heavy weight obviously, but even among the others, Brazil, India and Russia, our economy pales in significance to those. This is where South Africa is carrying a relevant role in the fact that as a country we are punching above our weight.

© REUTERS / Wu Hong/Pool
BRICS Summit Kicks Off in Johannesburg, South Africa (VIDEO)
This is not unusual; South Africa has over the last 25 years or so, since democracy, punched above our weight in the multilateral arena, but what I think is more relevant here is that South Africa has been identified and is now … a representative of the African continent. A continent of over 2 billion people with some of the highest growth rates in the world at the moment and by inviting other African countries as observers to the summit, South Africa has now placed itself and I think strategically as a leading country in Africa that will bring the rest of the African countries into the BRICS discussions.

Sputnik: What is the biggest challenge for South Africa in terms of business and trade moving forward?

Lyal White: I think South Africa along with Brazil are two of the worst performing countries of the so-called emerging fold and we need to drive ourselves out of this. We need to improve our competitiveness on global markets. We need to improve our competitiveness with other countries around the world, where we could leverage off our association or our membership within the BRICS to leverage off direct relations, build trade and investment relations between these countries, but also to use this to develop a broader platform, to try and encourage scale in our productivity and in our reach.

© REUTERS / Siphiwe Sibeko
'Stabilizing Factor in Foreign Affairs': 5 Things to Know About BRICS on Its 10th Anniversary Summit
South Africa is a small economy with a relatively small population. By reaching out to other African countries we immediately increase the scale that we have to offer along with some of the other sub-regions on the African continent.

Sputnik: Have you now got an opportunity in South Africa given this geopolitical situation that we got in the world at the moment, this isolation policy of President Trump and America and these conflicting situations that we have got with European Union, China, Canada and Mexico where really South Africa could gather some traction and try to develop its own trade agreements. It’s an interesting time for South Africa, isn’t it?

Lyal White: It is an interesting time and you raised a very interesting point here, as this does present a unique opportunity for South Africa to reposition itself as a new bastion of free trade.

We have seen the whole liberal economic order retreating under Trump and this is something that maybe South Africa and with the support of the BRICS could try and put back on track again to enable free trade if you like and open things up.

We need to bolster trade with the likes of Russia, India and Brazil. Trade between those countries is still relatively low and I might add that investment is comparatively low when you look at global movements of capital. So that does present that type of opportunity and perhaps pursuing alternative trade partners and again to find the niches.

We are hampered by external dynamics, the economic realities of trade and investments. Many of our companies compete with those companies, many of our products are produced at the exact time of the year, I think now specifically between South Africa and Brazil.

But we do need to build in more tangibles and commercial flows that will encourage an entity of BRICS to have some type of teeth.

The views and opinions of professor Lyal White are those of the speaker and do not necessarily reflect those of Sputnik.