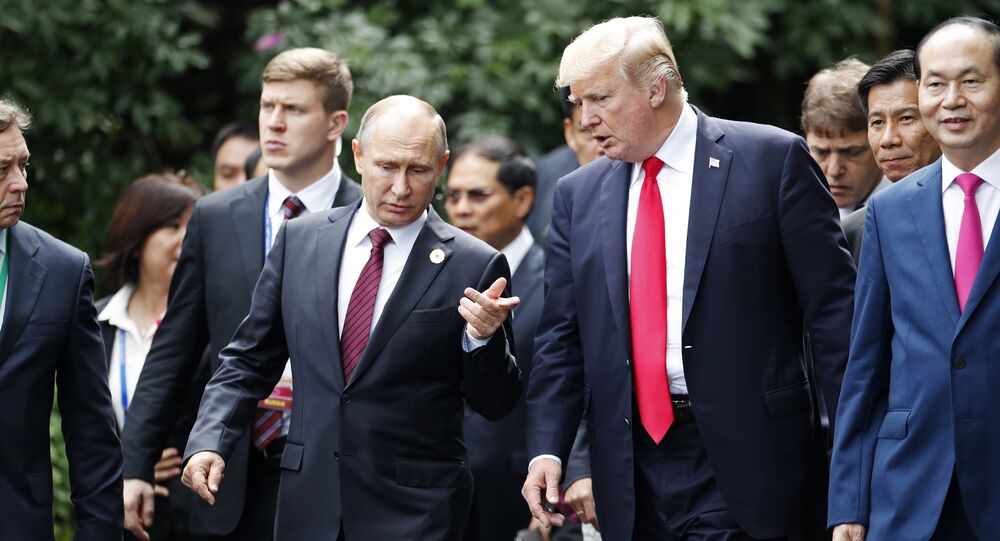 WASHINGTON (Sputnik) - US President Donald Trump must not allow domestic political madness to deter him from engaging in more dialogue with his Russian counterpart on topics such as how to avoid a nuclear war, analysts told Sputnik.

On Thursday, the White House said Trump tapped National Security Adviser John Bolton to invite Russian President Vladimir Putin to visit the White House in the fall, which comes just days after Monday’s summit in Helsinki, where the two leaders discussed a range of issues including nuclear arms treaties and the Ukraine crisis.

Trump’s decision to invite Putin to the United States sparked an outcry among the US president’s critics, who have accused him of being a traitor for selling out to Russia, with some lawmakers even proposing to subpoena the interpreter present at the Helsinki talks.

US Congressman Ted Lieu in an interview with CNN on Friday vowed to march in protest with many colleagues against Putin’s visit to Washington if the Russian leader accepts Trump’s offer.

The issue of nuclear arms control has become a high priority recently in US-Russian bilateral and multilateral negotiations.

The countries have been involved with treaties and efforts that include the Intermediate-Range Nuclear Forces Treaty (the INF Treaty), the Strategic Arms Reduction Treaty (START), as well as the Iran nuclear deal and denuclearization of the Korean peninsula.

"I think this is the positive step," Eurasia Center Vice President Michael Cooper told Sputnik on Friday when asked about Trump’s move to schedule another meeting with Putin. "In the interest of stopping the arms race you have to sit down and talk and explain to each other."

The future arms race, Cooper added, has to be controlled otherwise some unpredictable situation can escalate into a world war.

The expert pointed to the US-North Korean negotiations on denuclearization, which he said was "the product of dialogue."

Cooper also said that these conversations had only one alternative, that being Pyongyang remaining a threat to the United States and allies Japan and South Korea.

Ukraine is another topic Cooper highlighted as extremely important for US-Russian relations, noting that both countries have profound disagreements on the situation there.

On Friday, the Defense Department announced that they will provide $200 million to Kiev in security cooperation funds for additional training, equipment and advisory efforts to build the defensive capacity of Ukraine’s forces.

Russian Ambassador to the United States Anatoly Antonov said on Friday that concrete proposals on settling the conflict in eastern Ukraine were made at the summit between the two presidents in Helsinki.

© AFP 2021 / Bryan R. Smith
'Coats Gone Rogue': White House Reportedly Furious Over US Intel Chief's Remarks on Trump-Putin Meeting
Trump’s hawkish stances on Ukraine, Syria, the Skripal affair and sanctions against Russia have proven, in the administration’s mind, that the president is no pushover to Putin. In fact, Trump said in an interview on Thursday that if the United States and Russia fail to get along, he would become Putin’s "worst enemy."

Washington has repeatedly accused Russia of supporting rebels and fueling conflict in eastern Ukraine – charges the Kremlin has denied.

Cooper said Moscow and Washington should sit down and talk to each other to solve this problem. For Moscow's part, the only way to lift US sanctions against Russia is through talks.

On Friday, political tensions escalated even further with the House’s top Democrat, Nancy Pelosi, upon hearing of the invitation personally insulting Putin and slamming Trump for "fawning" over the leader of Russia.

US Senate Democratic leader Chuck Schumer in a statement on Friday said that Trump should not invite Putin to the White House until the details of the presidents' one-on-one meeting in Helsinki are released.

© REUTERS / Grigory Dukor
Putin Allegedly Proposed Referendum in Eastern Ukraine to Trump - Reports
"This course may lead to the most brutal political battle in the history of the United States but the outcome of this battle may affect not only domestic policy and US-Russia relations but would reverberate with thunder around the world," the President of American University in Moscow and one of the founders of the US-Russian Forum Edward Lozansky told Sputnik.

Lozansky said Trump chose to "double down on Putin" instead of trying to calm the political climate in Washington after their summit in Helsinki.

By doing this, he added, the US president reinforces his chosen political course as well as displaying disdain to his opponents.

Thursday, Trump said he looks forward to his next meeting with Putin so the two leaders can begin to implement the ideas they discussed during their recent summit in Helsinki.

© REUTERS / Grigory Dukor
Trump Says He Will Be Putin's 'Worst Enemy' If US-Russia Relationship Falters
Pompeo later on Thursday in an interview with US Catholic network EWTN said Trump and Putin during the talks in Helsinki had created a channel for communication and dialogue.

On Friday, Russian Ambassador to the United States Anatoly Antonov told an audience at the Valdai discussion club that he is unaware of any invitation from the Trump administration for Putin to visit Washington.