'Poised on Knife Edge': China Intends to Drive Wedge Between US, EU - Professor

China's Finance Ministry has stated it will not fire the first shot on the implementation of tariffs in a trade dispute with the United States.

The ministry, in a statement, said it would not implement its tariffs on U.S. goods, which are set to take effect on July 6 before the United States imposes its tariffs on Chinese goods. This statement follows reports from the European Officials who reported that China is allegedly putting pressure on the European Union to issue a strong joint statement against President Donald Trump’s trade policies.

Sputnik spoke to Dr Louis Brennan, Professor in Business Studies at Trinity College Dublin, on what this means for international trade.

© CC0
‘EU, China Have Common Interests to Cope With US Protectionism’ - Analyst
Sputnik: How significant is it that China is looking and pressing Europe for anti-U.S. alliance on trade?

Dr Louis Brennan: It’s undoubtedly significant, it’s perhaps not surprising because it’s certainly consistent with what would have been China’s ambition for some time to develop a closer relationship with Europe, and in that way offset the influence of longstanding European American relationships.

So in that respect, it’s as I say, significant but not surprising. Its significance is also related to the fact that in the past, China would be more seeking to neutralize the impact and influence of the European relationship.

The latest announcements are looking to drive a wedge between the US and Europe, which is quite significant as well.

Sputnik: What effect will this have on Philip Hammond's/Britain’s recent renewed commitment on improving economic and political relationships with China? 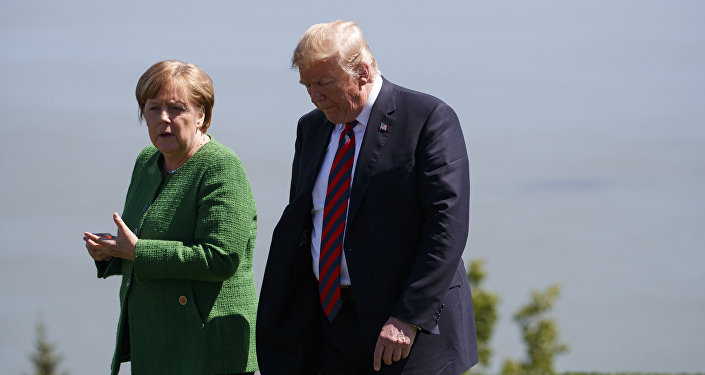 © AP Photo / Evan Vucci
Trump Slams EU as 'Possibly as Bad as China' on Trade Amid Tariffs Row
Dr Louis Brennan: I think from Britain’s point of view and in light of Philip Hammond’s recent statement, [Britain] are looking to oppose Brexit context. Its highly desirable and very important from a British point of view, that relationships with China are as close as a possible and in that respect, China and the UK, in the context of China’s relationship with other European countries, has been quite close.

The UK has been a firm advocate of Chinese relations in terms of trade and investment. Outside of the EU (if that is where Britain is to end up after the ongoing Brexit negotiations), China is probably likely according less importance to the relationship with Britain, in the sense that Europe is a much greater and important entity in the terms of trade for China than the UK is.

Sputnik: What effect will China's actions have on international trade between the East, USA and the EU?

© REUTERS / Virginia Mayo/Pool
How Trump's Trade War is Accelerating EU-China Rapprochement
So, there is an imperative on part of the EU and China, that trading relationships continue and continue in a non-confrontational fashion. Of course, the EU does have some issues with China in terms of trade and investment; notably the absence of reciprocity on the part of China in terms of access to its markets for EU companies. With that said, its very unlikely that into the future the EU/China trade relationship will be anything other than reasonably smooth.

On the other hand, given the developments from what we’ve seen from Washington, the US and the Trump administration, the trading relations between China and the US has become quite fraught and even more fraught into the future.

The views and opinions expressed in this article are those of Dr Louis Brennan and do not necessarily reflect Sputnik's position.