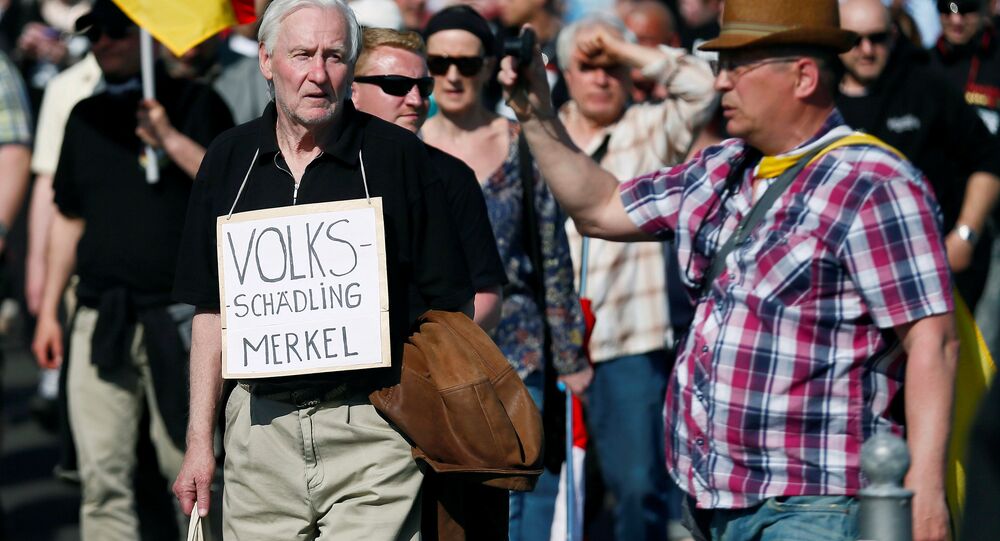 German MP: 'Merkel is Chancellor for Refugees, Not for German People'

The murder of a teenage German girl in Wiesbaden by a rejected asylum-seeker is raising a debate in Germany about the country’s refugee policy. Sputnik discussed the incident with Sebastian Munzenmaier, an AfD member of parliament for Mainz, the home city of the slain girl.

Sputnik: What would be your response to those who say that the asylum system in Germany partly to blame for what happened?

Sebastian Munzenmaier: I would respond that these people are nearly right, because asylum system is not partly to blame — it is totally to blame. Since Chancellor Merkel opened our borders in 2015, no-one in Germany has any idea of who is living here. By our system we are not able to shift off even known terrorists.

Our courts are totally over-challenged by the wave of cases and the government has no political will neither to get rejected asylum-seekers out of Germany, nor for preventing new ones from entering Germany.

We lost our borders, we lost our justice system, we are betrayed by our government and we have hundreds of thousands of young Muslim men. Nobody knows where they come from and nobody knows who they are. So, yes, the asylum system is to blame for what happened.

Sputnik: I suppose the $64 million question, is how can crimes like this one can be prevented? I think I know what the answer is going to be. It's not going to change the situation in Germany with all these Muslims. The Muslims are there to stay, I suppose. It's now down to regular education and allowing these Muslims to satisfactorily become part of the culture in Germany; but this is going to take time, isn't it?

Sebastian Munzenmaier: Yes, but first of all we have to close the borders to further illegal immigration. And then we have to lock up all rejected asylum seekers in barracks and then they will be shifted off consequently according to German law. Third-parties that accepted asylum seekers, who are getting criminal, they are going to be shifted off.

So, maybe we could debate that social security benefits will not be given in money, but in coupons for food, lodging, clothing, so that Germany gets less attractive for illegal immigrants searching for a better life. So these could be some possibilities.

Sputnik: Angela Merkel's government is in peril, albeit a hung parliament. What is the way forward for this situation? What would you like to see to be done?

Sebastian Munzenmaier: Our Chancellor, Angela Merkel, is the chancellor for refugees and not for the German people, so the Germans have to decide what they want. Do they want so-called "welcome politics," which Angela Merkel is doing? Or do they think: "Okay, we have to secure our borders, we have to secure our streets and all German people shall live in peace and without a threat of robbery, of death"?

Lagerfeld May Give Up German Citizenship Over Refugee Issue - Report