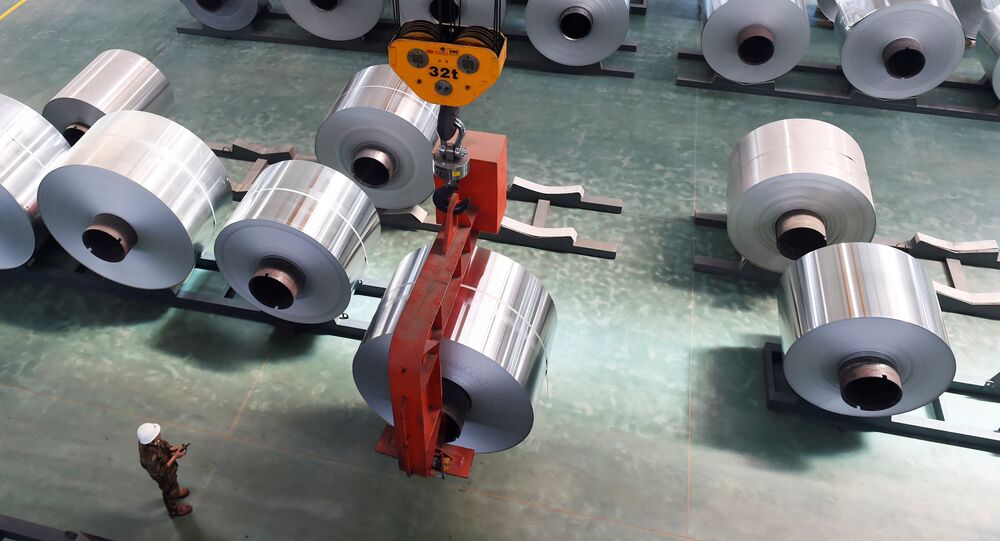 The European Union and Canada have contested the US move to introduce steel and aluminum tariffs at the World Trade Organization. The filed complaints come in response to President Trump’s decision announced on Friday. The US imposed a 25% tariff on steel imports from the EU, Canada and Mexico while aluminum imports were subject to a 10% duty.

Sputnik discussed the impact the US-imposed tariffs have already had on Europe with Carl Fey, a professor of international trade with the School of Business at Aalto University.

Sputnik: What impact have the US-imposed tariffs already had on Europe?

Carl Fey: We have seen obviously markets be very unsettled in the last amount of time and a lot of uncertainty. The key thing to keep in mind is that the most challenging thing for business executives to plan for is uncertainty and Trump's move has created a lot of uncertainty, it looks now like we know what’s happening in the short-term, but I think that the tariffs are not actually the long-term endgame that the Trump administration hopes for. I think this is actually a negotiating stance to get trading partners to actually make better trade deals. In fact, that’s what the Trump administration has been trying to do over the last six weeks or so and haven’t really managed to get what they're hoping for in NAFTA, where they wanted to have a quick outcome. To actually get a NAFTA deal signed. There hasn't been a lot of progress on that and likewise with the European Union, they haven’t really been able to extract that the concessions they wanted so we are where we are today.

© Sputnik
The EU, Canada, and Mexico Respond to Trump's Tariffs
Sputnik: It’s not really in your opinion going to be an all out trade war but more tit-for-tat measures and then lot of bargaining?

Carl Fey: Yes, I think that’s what’s most likely to happen but, of course, this is really dangerous because you don’t exactly know if one can actually get that bargaining and concessions that one wants and if it doesn’t happen this could last longer than we would hope and escalate some, and the key thing is that the European Union and Canada these are not China or something. These are the US' closest allies, and so in my opinion this is somewhat of a strange way to deal with your closest allies.

Sputnik: Indeed, if they are closest allies one wonders why Donald Trump would actually refer to these tariffs as connected to a security threat?

Carl Fey: Trump seems to believe that this will be helpful in negotiating the type of outcomes that he would like and anything can go, and eventually everyone will make up and be friends forever. I’m somewhat more concerned, when you act in these ways people remember this for a while and I’m unfortunately concerned that it takes quite some time to repair these actions.

Sputnik: Who’s going to suffer the most from the US tariffs in Europe?

Carl Fey: Well, ironically I think that one of the country's that will probably suffer the most could be the UK. The UK steel industry which will be hit with a 25% tariff has had some rough times over the years and now will have an additional challenge in terms of additional tariffs when exporting steel to the US. But I think there’s a bigger concern than just the steel that they can't send to the US and that is that other countries are also not able to send steel to the US and they all want to send that steal to someplace so they’re likely to sell it to other places that UK is selling steel to and thus they'll face more competition there. So that’s one area in one country that’s going to be impacted very much.

© AFP 2021 / MARIO LAPORTA
Aluminum Prices Rising Amid Introduction of US Metal Import Tariffs
Sputnik: How can Europe compensate the losses from the tariffs? And how quickly will be able to do so?

Carl Fey: I guess in terms of the metal, probably China is one place that they can turn to, and they probably will make some progress there and some things can be done with reasonable speed. I think also that you may see some other markets in Europe that are possible and you may also see that there is some possibility to increase exports to India as well.

Sputnik: But then in your opinion does Europe have enough unity and solidarity to actually stand up against Washington, to act as a united front in this trade war, because already we've heard Jean-Claude Juncker cautioning the EU countries against wading into bilateral deals with the US and saying that we need to put up a united front?

Carl Fey: Yes, so this is the problem, as things expand, and more and more industries become impacted, obviously, different European countries are impacted greater in different industries. So when you talk about tariffs and the car industry I would say Germany was particularly concerned and the list goes on like that, and so there’s a strong pressure for bilateral negotiations, and by the way, the Trump administration clearly has shown a preference for bilateral negotiations, and so they will readily accept that. So I do think there’s a real risk that things could break down, but so far, the European Union, recognizing this, has been able to hold together and is trying to do so, and they have initially, but if that could be maintained long-term, even if they’re increasing tariffs in different industries I think it will be a real challenge for the European Union, and I am somewhat wondering if that will be possible or not.

© REUTERS / Fabian Bimmer
G7 Vows to Fight US Steel, Aluminum Tariffs
Sputnik: As a reaction to all this the European Union, Canada they’re saying they’re going to challenge the US, I believe they already are, in the WTO, what effect could that intervention have?

Carl Fey: If the WTO comes out and says these actions are not legitimate then it’s sort of hard to imagine the US is not going to listen to a WTO ruling. So I'm guessing they might backdown on this, but I don’t think we will hear some resolutions immediately and it's not clear if a resolution or ruling would be so clear in black-and-white and across the board. It might well be a more nuanced ruling, but surely if a ruling against the US would come out, this would set an interesting precedent, given that the US is considered to be working in close unison with the WTO and been sort of the leader in the world pushing for ensuring that companies behave right, if you will, and so we may see a new era started if we find this ruling coming against the US.