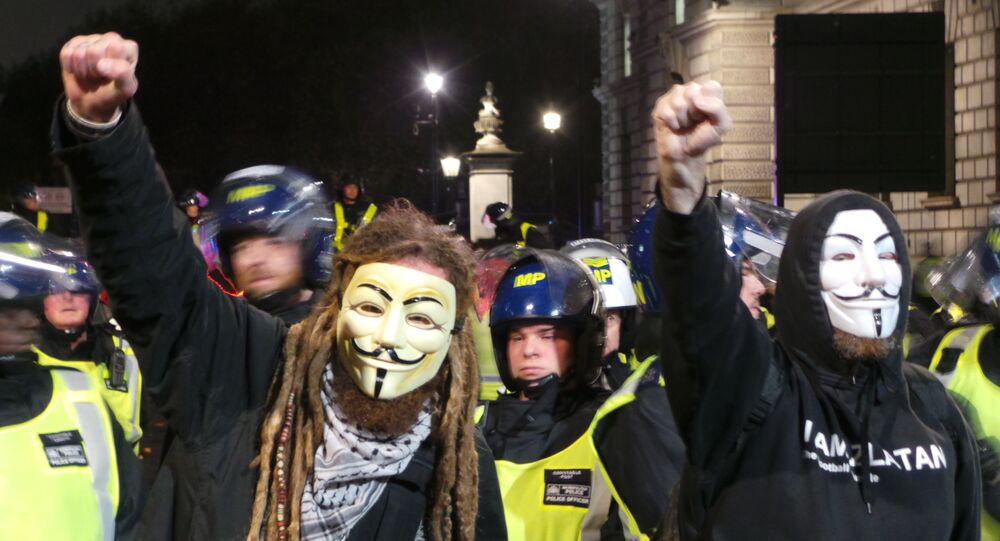 An internal UK Counter Terrorism unit document has revealed some of the groups British authorities view as ‘domestic extremists’. A campaigner has told Sputnik journalist Kit Klarenberg the file is a clear demonstration of how lacking in legal validity the phrase is.

Dubbed 'Extremist Symbols and Flags', the document was seemingly prepared to support the UK government's controversial anti-radicalization program 'Prevent'. The strategy has been condemned for 'marginalizing and demonizing' Britain's Islamic population in some quarters.

This document's authors state in its introduction it is not intended to be "an exhaustive list of all extremist symbols that may be seen within the UK."

Instead, it identifies a select number of flags and iconography of proscribed terrorist groups "known to have some material impact on the UK and its population at this time." The document was evidently not intended for public consumption — no mainstream media organization has reported on its contents, and it was removed from a number of official hosting sites June 6 — and no date of publication is offered.

However, it describes neo-nazi group Scottish Dawn as being a proscribed organization in the UK, and then-Home Secretary Amber Rudd enacted the ban September 28 2017, clearly indicating it was produced since then.

The document repeatedly admits the immense difficulties of discerning an extremist group based purely on flags and symbols, even if only indirectly.

For instance, the first section deals with 'Islamist Terrorism', listing Daesh, al-Qaida and Hezbollah — but notes while Hezbollah's militant wing is banned in the UK, its political wing isn't, and both use the same flag.

© AP Photo / Michael Sohn
Flag of Saudi Arabia
Even more farcically, the next slide documents how the 'Shahada' symbol — Islamic creed — is used by the Abu Sayyaf, Jahbat al-Nusra and Taliban, among others, on their respective logos. However, it also acknowledges it is a prevalent symbol within Islam overall, featuring on the national flag of Saudi Arabia, and states "displaying it is not a cause for concern" — an important distinction to make, the authors clearly feel, as "the flag is often mistaken for the flags of Islamist extremist groups."

Despite the issues inherent in identifying extremist organizations based on iconography alone, few could surely argue against the principle of police forces educating their staff on how to spot potentially violent elements on British streets. Nonetheless, the document's final slide — 'Domestic Extremism' highlights an area of extreme concern for many campaigners.

'Domestic Extremism' Slide © UK Counter Terrorism Unit
"The label 'domestic extremism' is an invention of the police, used to justify intrusive surveillance on political campaigners. It currently has no basis in law and both the government and police have struggled to devise a credible definition robust enough to withstand legal scrutiny. It means pretty much whatever police want it to mean," Kevin Blowe, coordinator of the Network for Police Monitoring (Netpol), told Sputnik.

Under pressure from campaigners, the Metropolitan Police concocted a 'working definition' of the term in 2014. 'Domestic extremism' is said to relate to "activity of groups or individuals who commit or plan serious criminal activity motivated by a political or ideological viewpoint."

However, there are numerous documented instances of the UK government designating particular groups, individuals and movements as ‘domestic extremist', despite officials simultaneously conceding they pose no risk to the public, and their activities are extremely unlikely to become criminal, let alone terroristic.

For example, in 2016, opponents of fracking discovered their campaigning activities had been labelled 'domestic extremism' under the 'Prevent' strategy. In subsequent correspondence with the Home Office, an Observer journalist received confirmation from a department spokesperson that while Prevent "[safeguards] people at risk from being drawn into terrorism," support for anti-fracking "is not an indicator of vulnerability."

The groups listed in the UK Counter Terrorism unit document are similarly problematic. The Animal Liberation Front is effectively dormant in 2018, while the Hunt Saboteurs Association no longer "uses direct action to stop fox hunting," and instead documents and prevents illegal hunting. Anonymous — described as an "international network of hacktivists" — has no history of violent activity, and the Antifa symbol is widely used by anti-fascists across the world — including football supporters.

Surveillance of 'domestic extremists' was for many years the responsibility of the National Domestic Extremism and Disorder Intelligence Unit (NDEDIU). Netpol had long-campaigned for its closure, and in 2017 it was absorbed into the National Counter Terrorism Police Headquarters. However, Kevin says the change is purely cosmetic, and the new body "remains the same secretive, unaccountable driver of mass surveillance on political dissent" as the unit(s) preceding it.

As a result, UK police still employ the same approach to surveilling protests as they do for organised crime. They assess 'risks' and 'threats', creating detailed 'target profiles' on potential offenders and their associates. What this has resulted in, Kevin suggests, is intelligence-gathering on an industrial scale on protest movements, in order to build up pictures of the organisational structures, tactics and organisers of campaign groups and identify links with existing and potential allies.

Victims of UK Police Spying Protest Outside Royal Court of Justice, London © Sputnik 2018
"This is why we see Forward Intelligence Teams at demonstrations, why on many protests everyone is photographed, and why some campaigners find themselves targeted at home. Inevitably this kind of profiling is often based on no actual criminal behavior, but an arbitrary and subjective assessment of individuals or groups. It can, however, lead to a different, more aggressive response to certain protesters compared to others," Kevin told Sputnik.

Further complicating the issue, it's extremely difficult for individuals or groups to find out whether they've been designated 'domestic extremists' in the first place. Netpol has documented how campaigners who have attempted to use official channels, such as the 1998 Data Protection Act, to access the dossiers police may or may not have compiled on them are typically met with a wall of silence, and/or blanket refusal to disclose any information whatsoever.

© AFP 2021 / Justin TALLIS
Green Party co-leader Caroline Lucas poses for a photograph with a green question mark outside the entrance to Downing Street in central London on May 30, 2017
Even more egregiously, in some cases officials have even shredded evidence documenting their snooping on campaigners. In 2017, a whistleblower revealed to UK Green Party peer Jenny Jones that NDEDIU staff destroyed documents and deleted files to conceal the Unit's illegal hacking of environmental and social justice campaigners' emails.

"The revelations that led to the establishment of the Undercover Policing Inquiry demonstrated how political policing, answerable to no-one, has a tendency to elevate the hunt for so-called ‘extremists' to the point of obsession. When there is so little scrutiny or accountability, the prospect of a conservative, traditionalist institution like the police identifying alleged "risk" entirely subjectively within entire communities, as they have done to British Muslims, is significantly increased. This is why we argues police have no business conducting surveillance based solely on people's political beliefs," Kevin concludes.

Sputnik contacted the Eastern Region Special Operations Unit for comment, but as of June 1 is yet to receive a response.