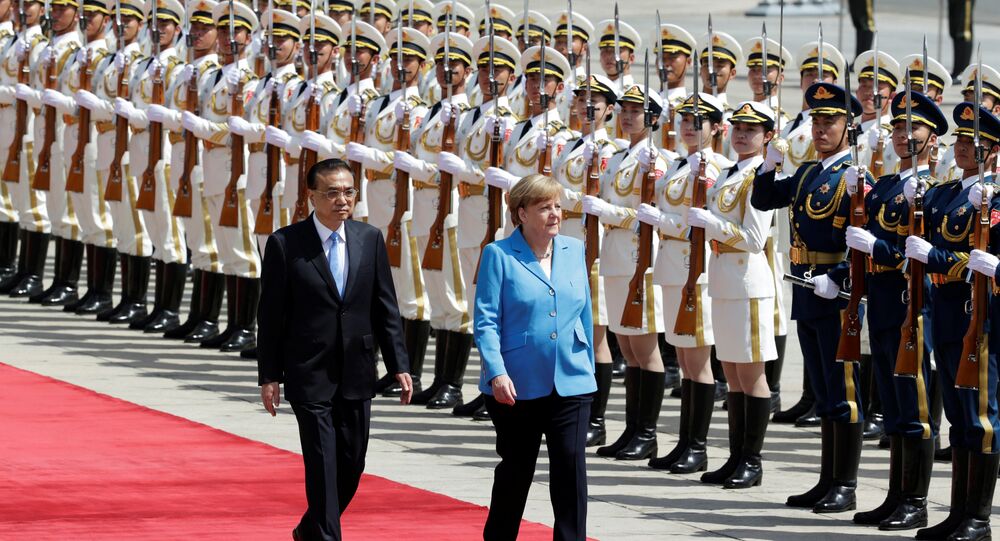 Using Yuan for China-Germany Trade 'Would Dull US Sanctions, Serve as Leverage'

Germany will stay committed to the Iran nuclear deal in spite of the US decision to pull out of the accord, Chancellor Angela Merkel said following talks with Chinese Premier Li Keqiang on Thursday. Speaking to Sputnik, independent China strategist Andrew Leung outlined how Berlin and Beijing could enhance coordination and economic cooperation.

Sputnik: Both Mrs. Merkel and China’s Li Keqiang have pledged to stand behind the existing deal with Iran. Moreover, analysts say that China and Germany can enhance their coordination in the Iranian nuclear deal now that the United States has pulled out. What efforts could the two nations undertake to this end?

Andrew Leung: It's not just a question of China and Germany reacting to Donald Trump's scrapping the deal. It's also to do with President Trump's alleged or threatened sanctions against nations trying to deal with Iran and trying to enter in relationships with Iran. These kinds of sanctions would impact German businesses and other stakeholders; and of course they would affect China and other nations as well.

© AP Photo / Michael Sohn
Merkel: Germany Remains Committed to Iran Nuclear Deal
So I think the two leaders are likely to discuss how to react to that, and how to mitigate or avoid some of the sanctions, maybe by using the renminbi as the currency medium of transactions. Because after all, the US dollar still reigns supreme, and it's going to impact a lot of businesses in the whole range of the supply chain.

Sputnik: What specific forms of cooperation do you think China and Germany or the EU in general could embark on to counter the US stance on trade, the North Korean issue, and of course the Iranian nuclear deal?

Andrew Leung: Germany and the European Union, of course, are very, very big economies. In fact, combined, [the EU] is larger than the United States as far as the economy is concerned.

© AP Photo / Vahid Salemi
Iranian Supreme Leader Sets 7 Conditions for EU to Keep Nuke Deal Alive
Then of course [there is the fact that] the renminbi is increasingly being used for businesses involved with Chinese enterprises, particularly in the energy field and energy deals. For example gas [deals] between China and Germany and between China and Russia and other countries can be denominated in renminbi, thereby avoiding the use of the US dollar…. I think that can be a possible leverage for both countries to use.

Like it or not, if the United States is intent on imposing all of these sanctions, I don't think the negative impact can be avoided entirely. But at least both countries can work together to mitigate some of the adverse impacts.

Sputnik: We also have French President Emmanuel Macron set to hold talks with Russian President Vladimir Putin during the International Economic Forum, which has kicked off in St. Petersburg. What message do you think that these visits by Merkel and Macron to Beijing and St. Petersburg send to the Trump administration?

Andrew Leung: I think that with the Trump administration increasingly being seen as unpredictable, tearing up international agreements at will and putting "America First" ahead of international rules enshrined in the WTO, I think the message will be to push forward [cooperation] between China and the European Union members and other members wanting to guard the rule-based international system.

Yes, there are problems and international institutions need to be modified in tune with the changing times, not least of course the model of the European Union amongst its member states in relation to immigration and other issues. On the other hand, the international trade rules need to be safeguarded; they need to be upheld.

Otherwise it will be a free-for-all, a world where hegemons would exert their influence and sacrifice the interests of many, many other nations. This is not good for any particular country; it's definitely not good for the world order. And I think that would be the message being explained, expounded upon and held up in this international forum.

© Sputnik / Vladimir Astapkovich
EU Turns Toward Russia as Trans-Atlantic Union Bursting at Seams
Sputnik: Given the Trump administration's unpredictability, do you think that this is creating an atmosphere in the world where we could see the forming of new allies? A form of cooperation or rapprochement between countries which were formerly less friendly?

Andrew Leung: I think there is a great deal of cooperation needed to address the existing concerns. … The question is how to address these concerns in a calm, fair and open manner. Providing a forum, providing a dialogue, providing a clear-eyed approach to address these issues is the very essence of cooperation. There are many things that need changing in the light of changing dynamics and changing problems and aspirations of people. But it's important to look at how these problems should be addressed in a calm and non-confrontational manner.

Andrew Leung is an independent investment consultant and China strategist. The views and opinions expressed by Mr. Leung are those of the contributor, and do not necessarily reflect those of Sputnik.