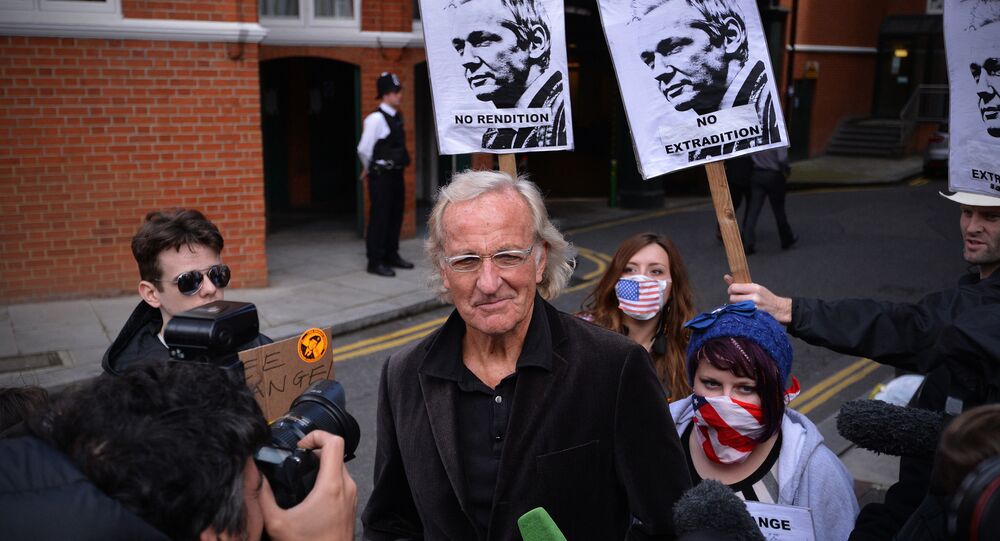 Ecuadorian Foreign Minister Maria Fernanda Espinosa says Quito and London "have the intention and the interest" of reaching a "definite agreement" on the status of WikiLeaks founder Julian Assange. Speaking to Sputnik, renowned journalist John Pilger, a personal friend of Assange, said that the move is a betrayal by Ecuador's new president.

Sputnik: Julian Assange has been cut off from communications for a month and a half now. What is known about his physical condition?

John Pilger: His physical condition is not good at all. He hasn't had natural light for almost six years. He has a persistent cough. He is suffering physically [much the same as] anyone who is imprisoned, effectively, [and] without even the opportunity to go outside and exercise.

He's been denied even the right of passage to hospital. They say 'yes you can go, but we're not going to allow you back.' So the examinations that he needs he hasn't been able to get.

Sputnik: Ecuador's foreign minister has said that the country is in talks with Britain about Assange's fate. What can you tell us about this?

John Pilger: I can say that the new government in Ecuador led by Lenin Moreno is a disgrace. They have defamed the good name of Ecuador which under the previous president, [Rafael] Correa, had elevated itself to an extraordinarily moral position in granting Julian Assange political refuge.

© AP Photo / Kirsty Wigglesworth
Ecuador Prepares to Hand Julian Assange Over to UK, US - Reports
Politically refuge is something that is internationally recognized. It's not something you can then water down. Well that's what Moreno's government has done. He's negotiated with the British government over the head of Julian, at times not even involving him and his lawyers.

It's quite clear that this government has deferred to the United States, because it cut off Julian's contacts – all internet, all phone, all visitors apart from food and lawyers on the day that US SouthCom deputy commander general Joseph DiSalvo arrived in Quito, Ecuador to renegotiate a US base that Correa had shut down. [This is] too much of a coincidence.

Ecuador has to take responsibility for Julian's state now, because he is in their embassy, and indeed a citizen of Ecuador. But Ecuador is a tiny country, and in the historical pattern has been pressured massively by the United States, which of course is working its way right through the governments that might have challenged US interests in Latin America, from Venezuela to Argentina to Bolivia and now to Ecuador…

The US has a very, very clear agenda here. It has an indictment ready for [Assange], a draconian indictment that it has been working on for a number of years. The FBI apparently has the biggest file apparently in its history on him (God knows what's in it).

© REUTERS / Peter Nicholls
'Smelly Kid in Class': Former Snowden Investigator Bullies Julian Assange's Mom on Twitter
The vindictive pursuit of Assange [is happening] for one reason only: he told the truth. He revealed through Chelsea Manning…the war crimes of the United States in Afghanistan and in Iraq; and of course last year revealing the machinations of the Democratic National Committee in trying to gerrymander the result [of the primary vote] in that country, which it successfully did…

Julian Assange is an editor, a publisher, and a journalist no different from if he was working for the New York Times or the Guardian in London. But they've been able to defame him as some kind of spy…As a result, their indictment is indeed draconian, and could well result in an extradition that puts him away in some hellhole for the rest of his life. And that of course is why he's in the Ecuadorian embassy.

John Pilger is a veteran journalist and documentary filmmaker whose films have won major awards in Britain, Europe and the United States. The views and opinions expressed by Mr. Pilger are those of the speaker and do not necessarily reflect those of Sputnik.

Ecuador Prepares to Hand Julian Assange Over to UK, US - Reports