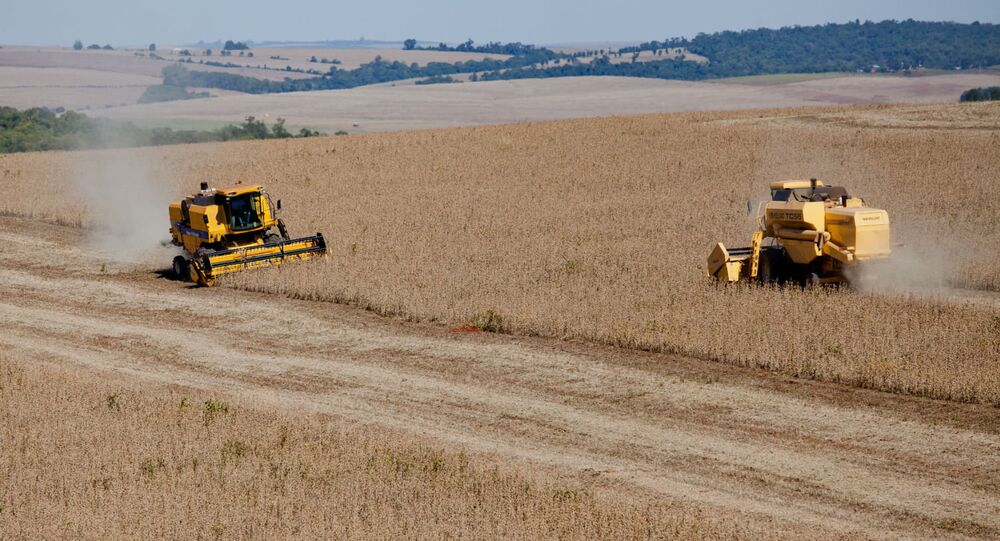 Agroterrorism: that was the word used by a representative of the Brazilian Intelligence Agency (ABIN), Danilo Coelho, speaking to the Chamber of Deputies of Brazil. He had cautioned that Brazil should be better prepared for potential acts of sabotage in agriculture and for what he has called “agroterrorism.”

According to Danilo Coelho, Brazil doesn't have a list of chemical and biological agents (or biochemical agents as they are often referred to by some analysts) that should be under state control, as they are in other countries.

In his interview with Sputnik, intelligence and security expert Ricardo Gennari noted that terrorism in this industry is something serious that could literally blow up the country:

"Certain ABIN's concerns expressed in the Chamber of Deputies are not new. Brazil has been already trying to protect itself from bio-piracy for a long time. In 2011 the Institutional Security Cabinet (which governs ABIN) published the National Intelligence Strategy which covered espionage and sabotage issues in the country. So, what is now called "agroterrorism" is nothing new both in Brazil and anywhere in the world, because very serious interests of businesses and countries are involved in this issue."

Gennari also analyzed the negative impact of agroterrorism on the food security of Brazil:

"We are going to analyze recent cases of foot-and-mouth disease in the country, which are suspected to be deliberately instigated. The cases were documented in 2016 and had a severe impact on all the stockbreeders: small, medium and large. They had stopped selling meat for the domestic market and suffered too much from restrictions imposed by the countries importing meat from Brazil. We know that Brazil is among the world's largest, if not the largest, meat exporters. Thus, we can calculate the damage cost and assess the impact of these actions, probably caused by sabotage, on the country's economy and domestic consumption."

© Sputnik / Ustinov
How to Tame the Amu Darya? River Flooding Threatens Afghani Agriculture
The government took the problem very seriously and in 2017 announced that the foot-and-mouth disease had been completely eradicated in Brazil.

At a public hearing in the Chamber of Deputies, the deputy head of the disarmament and secret technologies department in the Ministry of Foreign Affairs, Maria Cecília Vieira, noted that Brazil had signed several international conventions banning the stockpiling and use of chemical and biological weapons. She referred in particular to the Biological Weapons Convention, ratified by Brazil in 1976, and the Chemical Weapons Convention, approved by the government in 1999. Maria Cecília Vieira recalled that "Brazil strongly condemns the use of chemical weapons and weapons of mass destruction."

According to Gennari, these are extremely serious matters and the government should ensure stricter and more effective control over prohibited agents:

"The problem in Brazil is to make these chemical and biological agents inaccessible to the public. Brazil has set up some rules for the usage of these materials. And what about their utilization? Is the use and the utilization of these agents controlled enough? Is there necessary austerity in this control? These are questions that the government has not yet given satisfactory and encouraging answers to."

Sputnik's interlocutor thinks Brazil has only one possibility to adequately care for the security and prevent terrorist acts both in rural areas and in cities:

"All government authorities should act in a comprehensive way to prevent actions which threaten the security of the country, people and the national economy in terms of protection against terrorism in the agro-industry. The impact of those actions is terrible, and it is therefore particularly important for the government to understand the need to be vigilant to prevent such actions."

Russian Unmanned Agrobot Puts the Fun Back Into Farming