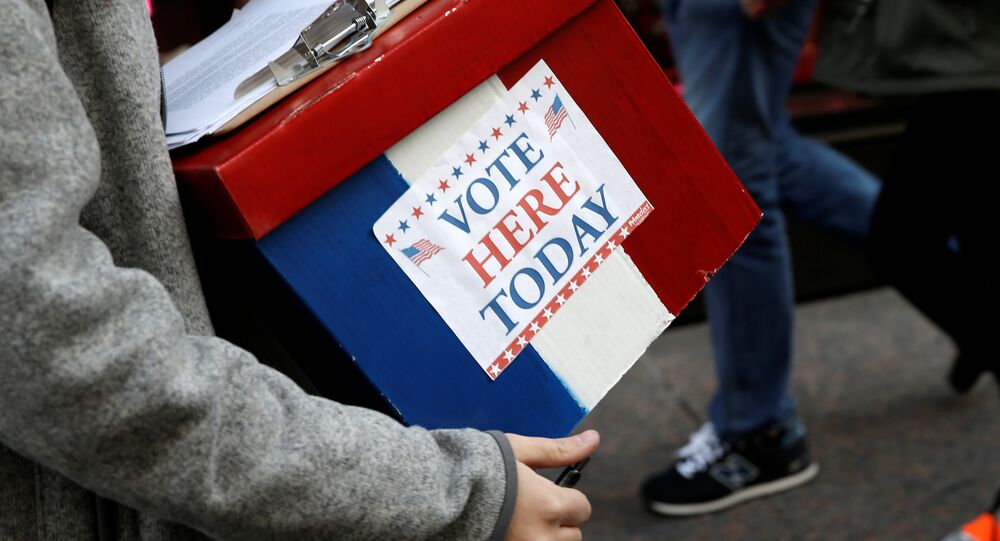 WASHINGTON (Sputnik) - The US House Intelligence Committee on Friday released its final report on its yearlong Russia investigation, accusing Moscow of interference in the 2016 US election but concluding that the Kremlin did not collude with President Donald Trump's campaign team.

The heavily redacted 243-page document, titled "Report on Russian Active Measures," drew swift praise from Trump, who hailed its conclusions as "powerful" and called for an immediate end to ongoing investigations into allegations of collusion between his campaign team and Moscow.

But US Democrats criticized the report, vowing to redouble their efforts to investigate alleged Russian meddling in the US vote.

Russia has repeatedly denied interfering in the election, dismissing allegations of meddling as "absurd."

No evidence of collusion

The US House Intelligence Committee formally opened its Russia investigation on January 25, 2017, just five days after Trump took office. Congressmen on the committee spent the next 14 months holding nine hearings, interviewing 73 witnesses and combing through more than 300,000 documents, according to Congressman Mike Conaway, who led the panel's investigation.

© AP Photo / Sergei Chuzavkov
Poroshenko Asks World for 'Formula to Counter Russia's Meddling in Any Election'
The committee announced in March that it had wrapped up the probe, with Republicans on the panel releasing a preliminary report saying they uncovered no evidence of "collusion, coordination, or conspiracy" between Trump's campaign team and Moscow. Friday's final report underlined many of the same conclusions.

In its final report, the committee accused Russia of waging a "multifaceted, persistent and effective" influence campaign in the United States, but highlighted key US intelligence community failings and ruled out any collusion between Trump and Moscow.

The report claimed that Russian state actors and other third parties were behind the release of documents and communications stolen from US political organizations during the 2016 campaign.

But with regard to accusations of a conspiracy between Moscow and Trump's campaign team, the report concluded that none of the witnesses had provided any evidence of collusion or coordination between the two sides. The committee also found no indications that Trump's business dealings in Russia before the campaign would have formed the basis for any kind of collusion, the report said.

The report did say that members of the Trump campaign team showed "poor judgment" in their dealings with Russian nationals. But it also underlined that the committee did not find proof that meetings between Trump's associates and Russian officials, including one between Jeff Sessions and former Russian Ambassador Sergey Kislyak, constituted collusion with Moscow.

The panel also concluded that the Trump associates who had contact with Russians during the 2016 US election had no influence on either Trump or his campaign.

In addition, the report said the committee found no evidence that Trump's campaign team was involved in the hacking and distribution of former Democratic candidate Hillary Clinton's emails through WikiLeaks.

The report highlighted what the committee called significant "shortcomings" in the US intelligence community's assessment that Russia wanted Trump to win the election.

The committee "identified significant intelligence tradecraft failings that undermine confidence in the [intelligence community's] judgments regarding Russian President Vladimir Putin's strategic objectives for disrupting the US elections," the report said.

For instance, the report poked holes in the US intelligence community's conclusion that Russia wanted to help Trump to win the election, arguing that the Kremlin's main goal was to sow discord in the United States, not to influence the outcome of the vote.

"Some of this opposition research was used to produce sixteen memos, which comprise what has become known as the Steele dossier," the report noted.

The committee traced how the Clinton campaign and Democratic National Committee hired the law firm Perkins Coie, which in turn hired Fusion GPS to conduct research on Trump's Russia ties. Steele later used the information to compile his unverified dossier, which alleged that Russia had collected embarrassing information about Trump that it could use to exert leverage over him.

The House report also documented how Steele's dossier was then used to obtain a warrant to conduct surveillance on Trump campaign aides.

The committee provided a series of recommendations in the report, including a call for the Congress to update the Foreign Intelligence Surveillance Act (FISA) in order to allow investigators to obtain warrants for probes involving international cyber actors.

The report also called on the US intelligence community to immediately brief state and local officials about existing threats to election infrastructure.

The House panel also urged the Congress to refrain from hampering the president's ability to respond at his own discretion to any particular foreign threat.

Trump welcomed the release of the report, saying its conclusions confirmed the need to immediately end the Russia investigation.

"Just Out: House Intelligence Committee Report released. 'No evidence' that the Trump Campaign 'colluded, coordinated or conspired with Russia.' Clinton Campaign paid for Opposition Research obtained from Russia- Wow! A total Witch Hunt! MUST END NOW!" Trump said in a Twitter post just minutes after the release of the report.

Trump later told reporters at the White House that he and his administration were "honored" by the report's conclusions, which he called "conclusive," "strong" and "powerful."

But leading US Democrats including House Minority Leader Nancy Pelosi vowed to press ahead with efforts to investigate alleged Russian interference in the 2016 vote.

"House Democrats will continue to investigate Russian attacks on our elections," Pelosi said. "We will not relent in our effort to follow the facts and secure our elections from foreign interference. We have no time to waste."

Pelosi slammed what she called a Republican attempt to cover up for Trump, saying the report "made a mockery" of the Congressional investigation into Russian election interference.

© AP Photo / Matthias Schrader, pool
Trump Says Will Not Comment on Using Military Force in Iran
Along with its final report on the Russia probe, the House Intelligence Committee on Friday also released a 98-page rebuttal compiled by Democrats on the panel.

In their response, Democrats criticized what they called "gaps" in the panel's report and aspects of the investigation that they believe were not fully explored.

The committee's investigation is one of several US probes into alleged Russian interference in the 2016 US election, which include the investigation by Special Counsel Robert Mueller.

Both Russia and the Trump campaign have denied all allegations of collusion, and Moscow has called accusations it interfered in the 2016 election "absurd."