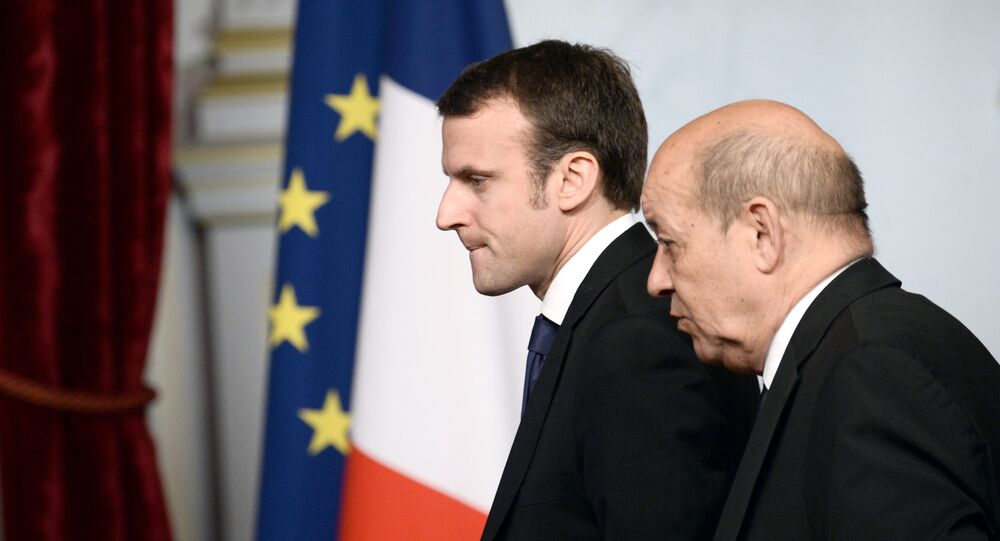 French Foreign Minister Jean-Yves Le Drian has accused Russia of "issuing contradictory official statements on the chemical attack in Douma." But is this really the case? Sputnik takes a look at the facts.

In an official statement published on Friday, Le Drian charged Moscow with vacillating in its official account of the alleged Douma chemical attack. "One day, it didn't take place; the next day, it was carried out by armed groups; the day after that, it was Western manipulation. There's no concern for consistency or truth, because it's all about sowing doubt and confusion," the minister said.

Le Drian went on to accuse Russia of "spreading videos featuring children, while the [April 7] attacks took the lives of more than 45 people and left a large number of others injured."

France, he said, has "numerous authenticated witness accounts," evidence from "medical NGOs," as well as "photos and videos" authenticated by French experts. Furthermore, he added, French labs have "confirmed" that a chemical attack took place.

The children mentioned by Le Drian include 11-year-old Hassan Diab, whose explosive testimony earlier this week revealed that the viral video spread by the White Helmets as 'evidence' of a chemical attack was bogus. The boy, who appears in the White Helmets' video, told the Rossiya 24 TV channel that he and his mother were urged to go to the hospital, where he was grabbed and had water poured on him while being filmed. His father added that there were no signs of chemical weapons use outside in the street and that the filmmakers gave the participants food after the shoot was wrapped up.

Another Douma boy, 10-year-old Mustafa, has since corroborated Hassan's story, telling Sputnik that kids near the hospital were promised cookies and bags of potatoes "if we did everything right" in filming the video.

The boys' testimony follows that of other eyewitnesses, including an ambulance driver at Douma Central Hospital, who has said that some of the people at the hospital were suffering from smoke inhalation followinga bomb explosion at a local residential building, and that unknown provocateurs had entered the hospital and started screaming about a chemical attack.

How Russia's collection and dissemination of witness testimonies, which contradicts claims made by militants, can amount to anything sinister is something only Monsieur Le Drian can explain.

The French foreign minister's claim that Russia has changed its story from saying that a chemical attack never took place in Douma to saying that one did, but that it was done by the militants, just isn't true.

What Russia did say was that Russian military police deployed to Douma last week have found a warehouse used by the jihadists containing precursors for chemical weapons including mustard gas and chlorine. The Syrian and Russian militaries have since published extensive photographic and video evidence from the lab.

It's also worth mentioning that unlike Le Drian's 'expert-authenticated' photographs and videos, including the widely spread White Helmet clip discredited above, the Russian and Syrian accounts are coming from on the ground in the city of Douma today.

Monsieur Le Drian's claim that Russia was trying to chalk down the Douma attack to "Western manipulation" is  probably based on recent evidence mentioned by Russian Foreign Ministry spokeswoman Maria Zakharova that the equipment found at the Douma chemical lab includes German-made chlorine and smoke grenades produced in the UK. It's hard to guess which part of Zakharova's statement amounts to claims of "Western manipulation," when all the spokeswoman has done is to relay the facts from the evidence found at the makeshift lab.

Speaking to Sputnik this week, Russian Foreign Minister Sergei Lavrov seemed almost to preempt his French counterpart's claims regarding Douma, and the disparity in the kinds of evidence presented. "I hope that all reasonable people see the difference in the arguments, and the difference in what facts are laid out on the table, and what facts are not presented at all," he said.

Russia's consistency regarding the alleged use of chemical weapons as a pretext for the Western missile strike against Syria is not surprising. As Sputnik contributor John Wight wrote just days after the alleged April 7 chemical attack, Syrian President Bashar Assad would have to be "the stupidest man on the planet" to squander the Syrian military's victories against the jihadists by doing the one thing that could prompt a Western intervention: using chemical weapons.

And Russian concerns aren't just limited to logic-based after-the-fact op-eds. On March 13, nearly a full month before Douma, Russian Armed Forces Chief of General Staff Valery Gerasimov reported that the Ministry of Defense had obtained reliable intelligence about plans by the militants in Eastern Ghouta to launch a false flag chemical attack and blame it on the government. Chillingly, he even predicted the details, including the White Helmets' plans for spreading the news of the 'attack' to Western media. This 'evidence', he said, would then be used by the US to justify missile strikes.

In other words, the Russian message on Douma has been the same not just after the alleged chemical attack; the threat of the West using a false flag attack as a pretext to launch airstrikes was pointed out by Russian officials weeks ahead of time.