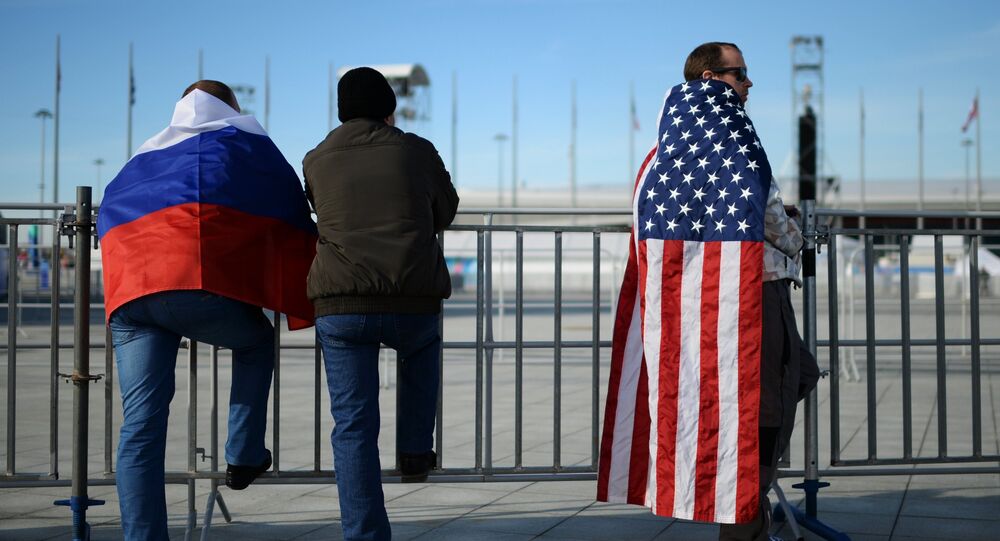 WASHINGTON (Sputnik) - The baseless US decision to expel 60 Russian diplomats and close the Russian Consulate General in Seattle will narrow the path to finding a real solution and mend ties with Moscow, although Washington is really looking to justify a military buildup against Russia, analysts told Sputnik.

The US and UK diplomatic offensives against Russia serve no discernible purpose except to generate increasing tensions between the West and Moscow, former US Army Colonel Earl Rasmussen who currently serves at the Eurasia Center think tank in Washington, DC said.

"Actions being taken by the United States and the United Kingdom along with several partner countries are poorly thought out and are only causing all parties to be backed further into politically dangerous corners, which may have only a narrow path forward, if that," he said.

© AFP 2020 / JOHN THYS
Russian Envoy to EU: 'Adequate Response' to Expulsion of Diplomats Expected
Following the poisoning of former MI6 asset Sergei Skripal in Salisbury, British Prime Minister Theresa May rushed to point the finger of blame at Russia, although the investigation into the case is far from being completed. Russia has denied any involvement in the case, pointed out that no evidence has been offered and sough a joint investigation as per international law and practice.

In addition to further damaging relations with Moscow by expelling Russian diplomats, the British leadership called upon the United States and European countries to follow in its footsteps. As a result, the White House tweeted Monday that 23 countries agreed to expel 137 Russian diplomats over the Skripal poisoning case.

Approach Toward Russia Counterproductive, Leads Down to Dangerous Spiral

The moves against Russia led by the United States and the United Kingdom were clearly counter-productive and served only to disrupt the conduct of international affairs, Rasmussen observed.

"Diplomatic actions taken by the United Kingdom’s ‘partners’, led by the United States, are pushing us further from any real solution," he said.

In fact, "We seem to be going down a dangerous spiral," Rasmussen said.

© AFP 2020 / MLADEN ANTONOV
Diplomats Expulsion Complicates US-Russian Pacific Partnership - Council
The crisis was being whipped up before any serious sustained and transparent investigation could be made into the real circumstances of the case, Rasmussen also pointed out.

"Involved parties need to follow international procedures that are clearly defined and perform a joint investigation to determine what really happened, and if it was a ‘nerve agent or related compound,’" he said.

The expulsion of the Russian diplomats reflected the growing instability in President Donald Trump’s personal circles that had led to the firing of his secretary of state Rex Tillerson and national security adviser H.R. McMaster and their replacement by hardliners Mike Pompeo and John Bolton, Rasmussen noted.

"Based on recent and projected changes in President Trump’s staff these recent actions are not surprising," he said.

However, such shoot-from-the-hip retaliatory actions based on as yet unsubstantiated allegations was not the way to conduct responsible diplomacy, Rasmussen suggested.

"One would think based on the theatrics of UK and US politicians that they are trying out for roles in the British-American spy drama ‘Strike Back’ versus engaging in serious diplomacy and problem solving," he said.

Prime Minister Theresa May’s accusations regarding the poisoning of Skripal and his daughter, Yulia, a Russian citizen, were not founded on any solid evidence, Rasmussen stated.

"If we look at the court transcripts from the United Kingdom’s own biological experts, they do not match wild accusations of the Prime Minister nor her Foreign Secretary. In fact, they are clearly not firm on the type of agent, the origin and the source of the attack," Rasmussen said.

"Unless, of course, [the case] is never really intended to be solved and has been planned to be a provocation indicting Russia before [the investigation] and without proof," he said.

Rasmussen warned that May and British Foreign Secretary Boris Johnson were dangerously escalating a confrontation with Russia by issuing accusatory statements.

"Both Ms. May and Mr. Johnson’s provocative statements are creating a very fragile environment," he said.

Involved parties needed to follow international procedures that were clearly defined and perform a joint investigation to determine what really happened, and whether it was a "nerve agent or related compound" that was used against Skripal, Rasmussen recommended.

US Objectives Appear Set On Increasing Hostility Toward Russia

Hawks in the United States were already taking advantage of the controversy to use it to try and polarize the American public to prepare them to support a conflict with Russia, former US Army officer and historian Todd Pierce cautioned.

"Heightened tensions between the two countries and increased hostility by the US population as we ‘condition the battlefield,’ in Rand Corporation’s words, of US public opinion to believe that the United States is the victim of an aggressor in a preemptive justification of potential US military attacks against Russia," he said.

© Sputnik / Alexei Agaryshev
Renowned Russian Intel Vet on Diplomats' Expulsion: 'Political Action'
Creating a political climate to support the mobilization of US forces would put them is a disproportionately advantageous position should war break out, accidentally or otherwise, Pierce explained.

Seeing little hope for "peaceful coexistence," they [the Russians] will retaliate in some manner, resulting in the further diminution of diplomacy, such as it has been," Pierce said.

US attitudes toward Russia, as well as those in allied nations were already being conditioned to look upon Russia as an inevitable enemy in war, Pierce observed.

© CC BY-SA 2.5 / Asiir / Embassy of Russia in Washington DC. Russia
Russian Envoy to US: 'Most Likely' Expulsion of Diplomats Planned in Advance
"As [German military theorist Carl von] Clausewitz recognized, war creates enmity, hatred and we are acting in every way as if we’re in a war with Russia as we escalate hostilities, which is apparent to them and they too will be influenced by enmity toward us for what can be plainly seen as a series of provocations ever since the end of the Cold War," he said.

However, it was the United States and its allies that were threatening Russia, not the other way around, pierce pointed out.

"They don’t have the same capabilities, nor do they have us surrounded as we basically do of them," he said.

US advanced information war capabilities will be fully exploited as they have already been mobilized for years, Pierce concluded.