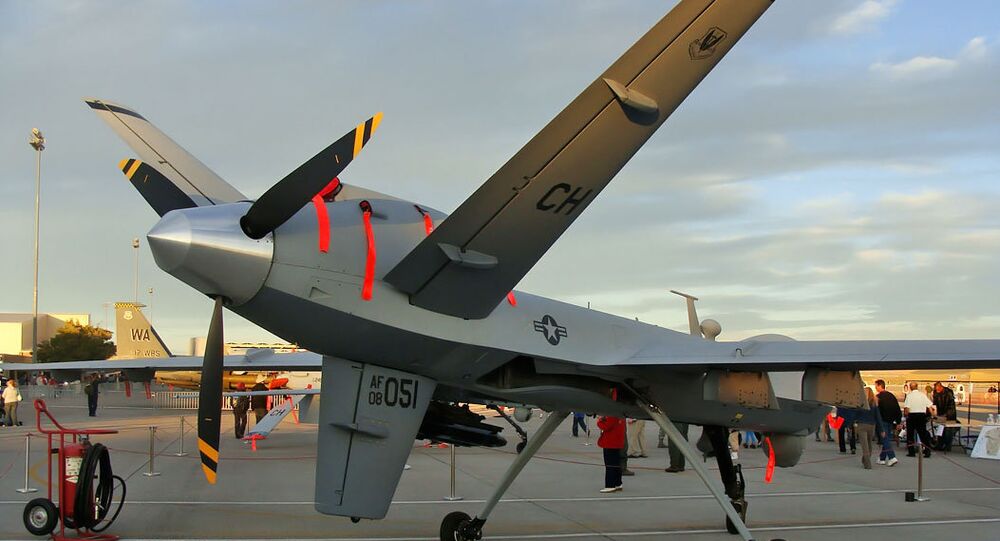 According to media reports, the US is expected to ease regulations that limit the exports of drones. US officials said Saudi Arabia, Japan, and some NATO members are interested in buying American UAVs. Sputnik discussed this with Laurie Calhoun, author of the book: "We Kill Because We Can: From Soldiering to Assassination in the Drone Age."

Sputnik: How disconcerting is the revisiting of the US drone export policy?

Laurie Calhoun: First of all, I think it's not surprising at all because Trump's main slogan is “Make America Great Again” and by that he means make America primarily economically great again, and so he has already stepped up weapons exports, all sorts of military exports far beyond the level of Obama, so this move is actually quite predictable. What is troubling to people is that the United States by exporting this technology and these weapons is in a way passing on the seal of approval that this new mode of “warfare” is ok for everyone to use as well. Under Obama it was considered more to be a case of American exceptionalism where Obama trusted his own judgment to be able to use these lethal drones outside areas of active hostilities, and the exportation of the technology was limited because of this view of American exceptionalism, basically, do as we say, not as we do.

Sputnik: Now opponents of drones argue that drone strikes create more terrorists than they actually kill, would you stand to agree with that point of view?

Laurie Calhoun: There are many-many problems, moral and legal, with the use of these lethal drones and the problem now is going to be that, as the exports are stepped up, it's going to be just another tool in the toolbox of all sorts of political leaders, not all of them will be the leaders of democratic nations and it means that these lethal drones will be used to eliminate political dissidents, it will be used to shore up the power of presidents for life in Africa, for example, they will be used in the way that the United States has used them against suspected terrorists in the Middle East primarily, but  basically, by sharing this technology and giving the go ahead, the green light for everyone to use them there's really no way to control their use, and at this point we never actually saw principles and guidelines that were used by the United States government, everything was done in secrecy, so now other leaders will have the same capacity that Obama assumed when he did things, for example, such as, killing US citizens without indictment or trial, so now other political leaders will begin to do that as well. I mean, David Cameron did it, the former UK Prime Minister killed British nationals in Syria, following, of course, the example of Barack Obama, but now it's going to be open season for just about any political leader to do this because these drones are relatively inexpensive, and even if the drone exports are limited initially to surveillance drones, these machines are essentially modular, so it's very simple to snap on a lethal delivery system and once they're out there people can copy them, they can modify them and they can use them for their own personal purposes.

Sputnik: Has there been any protest of any kind of conversation against this kind of policy of President Trump?

© AP Photo / Luca Bruno
New Toys: US Marines Release Details About Coming Mega-Drone
Laurie Calhoun: Unfortunately, in the United States there's a general presumption at this point that the use of lethal drones is perfectly acceptable. It was normalized over the presidency of Barack Obama, over a period of about 10 years we never debated it and by the time it was made public that this was being done, in fact, the program was run for many years by the CIA and so they were covert drone strikes, and by the time it was made public, just about everybody had decided that it is smart war, this is a way to fight a war without sacrificing our sons and daughters and so the president has to do what he has to do. So it has been accepted that the normalization of assassination was accomplished by Barack Obama because he increased these drone strikes all over the Middle East, he was bombing seven different countries simultaneously, although, people always trusted Barack Obama because he's soft-spoken and he seems like a fairly sane person, now this technology and this idea that it is just ok to go and assassinate suspects without warning in countries where you don't even have soldiers on the ground, this idea now has been transferred over to the Trump administration, and as you know, many people don’t really trust Trump, but unfortunately the criticisms of Trump in the United States tend to be of a broader nature, they want to say that Trump is a madman or evil, they never really get into the details and they are kind of stuck in the Russian controversy and the drones are the last thing on the list among critics of Trump unfortunately.

Sputnik: Can you explain the dangers of drone technology as a means of warfare compared to other weaponry, can you give us some insight?

Laurie Calhoun: It's a huge step backwards to pre-Magna Carta times where you kill people rather than indicting them and having them stand trial for their alleged crimes. So Obama has done this, David Cameron did this and now everyone will be doing this, so you might say why should other countries not do it if it has been done in the UK and the United States, and the problem is that many of the countries whose leaders will be acquiring these lethal drones are not democratic at present and it will be very difficult for these countries to become democratized when the central government authorities all have this capacity to eliminate any possible dissent.

The views expressed in this article are solely those of Laurie Calhoun and do not necessarily reflect the official position of Sputnik.