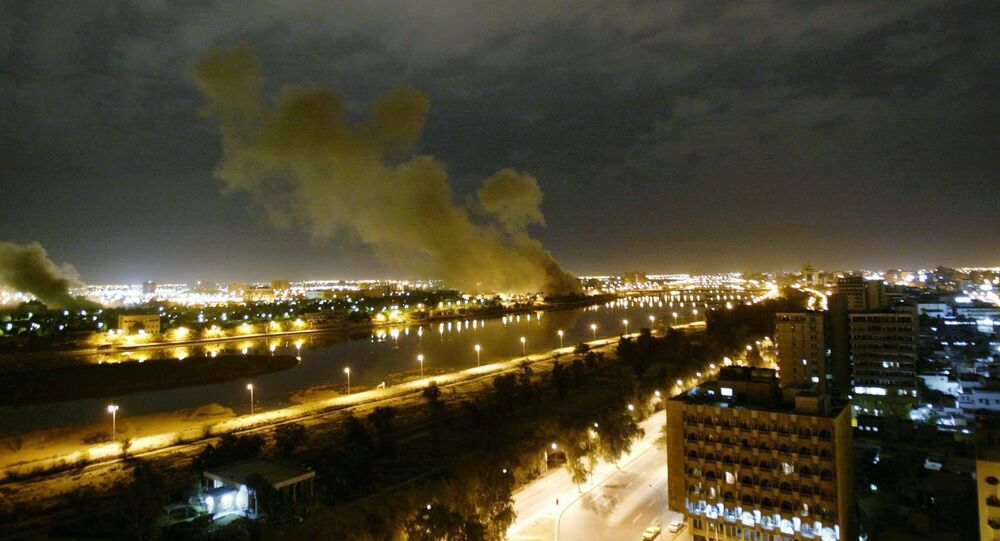 Commenting on the 15th anniversary of the beginning of the US invasion of Iraq in an interview with Sputnik, Iraqi politician Mahmoud Anwar specifically pointed to Washington's drive to achieve its Middle East ambitions in 2003.

Fighting al-Qaeda, But Adding to Daesh

Speaking to Sputnik, Riyad Saidawi, head of the Arab Research Center in Geneva, said that when occupying Iraq in 2003, the US "dealt a blow to the country's security forces, intelligence and the army, something that added to vacuum."

"In order to confront the crimes of the occupiers, a resistance movement was created in Iraq. In this environment, the extremists found fertile ground for propaganda and the growth in the number of supporters. They were able to obtain weapons which were quite easy to acquire," Saidawi pointed out.

READ MORE: US 'Creates Terrorist Grouplets to Justify Its Presence in Iraq' — Hezbollah

He added that "the Americans provoked an unprecedented degree of tension and confrontation in Iraqi society, primarily on religious grounds."

He was echoed by Egyptian expert on extremist groups Ahmed Ban, who told Sputnik that "the American invasion added to rapprochement between the Iraqi resistance movement against occupation, members of the Iraqi army, Salafi and jihadist groups."

As a result, the notorious organization Daesh* was formed; it seized control over a very large part of Iraq and spread beyond the country's borders, according to Ban.

"The crimes of Americans in Iraq have become the main motive for acts of revenge. It was revenge that became the platform for the creation of Daesh," he pointed out.

Mahmud Anwar, Iraqi politician and head of the "All of us are Iraq" movement, for his part recalled that "the Americans actively assisted Daesh," describing the US as "the official sponsor of terrorism in Iraq and throughout the world."

"They do it directly, or through their allies. We remember the words of former Secretary of State Hillary Clinton, who said that the US government had relations with Daesh and that it's time 'to stop this cooperation'," Anwar told Sputnik.

No Weapons of Mass Destruction in Iraq

Another reason for the US presence in Iraq became then-US Secretary of State Colin Powell's claims that Tehran, in violation of UN Security Council resolutions, allegedly possesses nuclear and chemical weapons.

Anwar recalled in this vein that "Donald Trump himself during his campaign said that the operation in Iraq was a failure and that it did not lead to anything good."

"It had repeatedly been stated that Saddam Hussein did not possess weapons of mass destruction. The Americans did not look for this weapon as they claimed and they needed an excuse for destroying Iraq. The Americans tried to achieve their ambitions in the Middle East," Anwar concluded.

© REUTERS / Youssef Boudlal
Iran to Open $3Bln Credit Line to Iraq for Post-War Reconstruction
The launch of Operation Iraqi Freedom aimed at ousting Saddam Hussein, whom Washington accused of developing, storing and planning to use weapons of mass destruction, was announced by then-US President George W. Bush on March 20, 2003.

In February 2009, then-US President Barack Obama announced an 18-month plan to reduce American troops to a force of 50,000, which would train Iraqi security forces and provide intelligence for the Iraqi government.

By the end of 2017, Iraqi forces, backed by airstrikes from the US-led coalition, managed to retake almost all Iraqi territory from Daesh. Now, Iraqi politicians are pressing for a reduction of the American military presence as the April 12 election in Iraq approaches.

The views and opinions expressed by Riyad Saidawi, Ahmed Ban and Mahmud Anwar are those of the speaker and do not necessarily reflect those of Sputnik.

*a terrorist organization banned in Russia

US Military Aircraft Crashes in Iraq: All Service Members on Board Dead