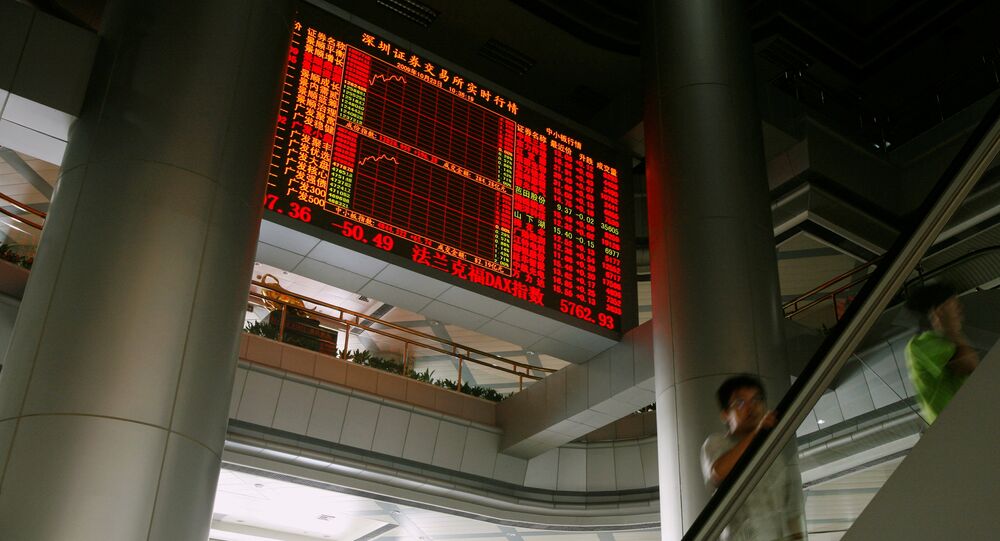 MOSCOW (Sputnik) Tommy Yang - Despite consecutive losses for almost one week, the Chinese stock market is unlikely to face another devastating crash like the one in 2015, when major indexes experienced unprecedented catastrophe after reaching record highs, experts told Sputnik.

The benchmark Shanghai Composite Index closed 132.2 points, or 4.05 percent, lower on Friday, marking four consecutive days of losses this week, as major stock markets in the world started to feel the impact of sluggish performance in the US stock market that started from late January.

The Dow Jones Industrial Average, the benchmark index in the United States, has lost more than 2,000 points, or about 9 percent, since February 1, closing at 23,860.46 points on Thursday. The downward pressure has extended to global stock markets, including China, where benchmark indexes posted significant losses for the first time in more than two years.

However, current economic and market conditions in China make it unlikely for the Chinese stock market to experience another catastrophic collapse as it did in 2015 when the benchmark Shanghai Composite Index fell by almost 30 percent in less than a month, Chinese securities analysts suggested.

"The conditions today are completely different from 2015. Back in 2015, the sharp decline was triggered by lack of liquidity, when many investors started to deleverage. After more than two years of strict regulations from Chinese authorities, the high leverage conditions no longer exist. The liquidity is much better today than 2015. If you look at fundamental economic indicators, today’s economic trend is definitely more positive compared to 2015, when the Chinese economy was facing strong downward pressure. Today’s economic data shows a stable or slightly upward trend," Liu Qihao, an analyst with Shanghai-based research firm Shanghai Securities, told Sputnik.

A strong rally started in late 2014, pushed China’s benchmark Shanghai Composite Index to the historic high in June 2015 at 5,166.35 points, up more than 150 percent from the previous year. Subsequently, the overheating stock market experienced its most painful losses shortly after, dropping more than 1,500 points, or about 30 percent, to 3,663.72 points by the end of July 2015. China’s stock market started to stabilize from early 2016 and has posted steady incremental growth until the sharp drop this week.

In addition to influence from a sluggish performance in the global stock markets, led by the crash in the US market, the recent sharp decline in the Chinese market could also simply be an overdue correction after overgrowing in the past two years, the Shanghai-based analyst suspected.

© AP Photo / Branden Camp
New Carbon Trading Market Unlikely to Overhaul China’s Energy Mix - Analysts
"The recent round of retraction could also be because the market grew a bit too much recently. Even the fundamental economic indicators were positive, they were not as good as to provide additional push for the stock market to grow further. The recent growth in the Chinese stock market triggered discussions of a ‘bullish market’ to arrive in China soon. In the stock market, there are always more people who are willing to contribute more when things are positive, but few want to offer assistance when the market starts to decline. When the whole market is rising and you start to give negative forecasts, no one will pay attention to your views. China does not have conditions today to support a sweeping bullish market," Liu said.

During the stock market crash in China in 2015, speculations circulated that Chinese authorities had to mobilize the nation’s sovereign wealth fund to help stabilize the market. Some analysts even described the steady growth of the Shanghai Composite Index in the past two years as effects of state intervention.

READ MORE: Will China Wreck the US Treasuries Market and the US Dollar?

"We believe the government wants the stock market to be stable and healthy, which means no excessive growth or drop. If the market expands too fast, they may come out to keep the pace in check. If the current downturn continues to be more serious, I believe they’ll try to stabilize the market," he said.

The analyst noted that close to the end of trading day on Friday, several large purchases of shares from the Industrial and Commercial Bank of China (ICBC), a top state-owned Chinese bank, took place and helped cover the losses of ICBC shares in early day trading.

"Such large volume transactions at the end of trading day need to come from investment funds with strong backing. It’s difficult for smaller investment funds to pull off such moves," Liu said.

After more than two years of steady growth, the latest abrupt drop in the Chinese stock market was the direct result of external influence from rapid retraction in the US stock market recently, Chinese securities analysts suggested.

However, the Beijing-based analyst does not expect prolonged inter-connection between performances in the stock markets of the two nations.

"The inter-connectivity between the Chinese stock market with the US market continues to exist, but it’s becoming weaker and weaker. There doesn’t seem to be a lot of problems with the global economy right now. There are some concerns about the rebound of inflation levels. But I don’t think it’ll become a major issue," he said.

The analyst expects major Chinese indexes to outperform US indexes in the short term, as there is not much room for further decline in the stock market in China.

Why Controversy Over Trump Sends Shockwaves Through US Stock Markets