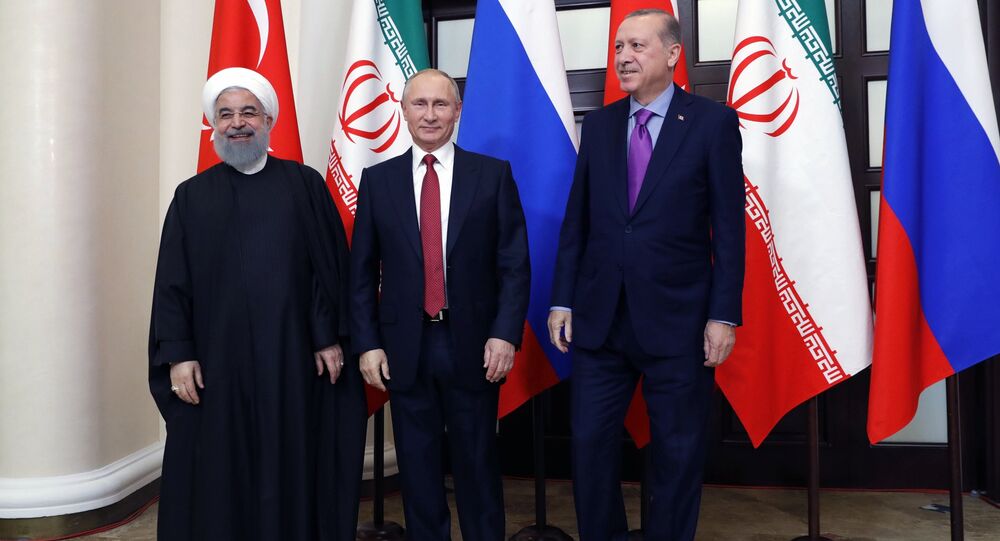 A member of a Turkish opposition party has commented on the consequences of the recent meeting on Syria between the leaders of Russia, Turkey and Iran.

Commenting on Wednesday's meeting of Russian, Turkish and Iranian presidents in Sochi on the Syrian settlement, Ozturk Yilmaz, the Turkish opposition Republican People's Party (CHP) deputy chair responsible for foreign relations, told Sputnik, "This is a great achievement after all but this is not the last stop, the process is just beginning."

"And we have to put all our positive efforts on the table and to persuade each other to find an acceptable solution to Syrian crisis, which will save the territorial integrity of Syria and also Syria will be free of all militant groups, terrorists, foreign fighters. This will be an important milestone for all side."

According to the Turkish politician, his party fully supports all constructive efforts for the political settlement of the Syrian crisis and considered Sochi and Astana meetings to be very constructive.

© Sputnik / Michael Metzel/POOL
How Victorious 'Triumvirate' of Russia, Turkey, Iran Prevented Syria From Repeating Libya's Fate
Yilmaz noted there were pending issues like the participation of Syrian Kurds' Democratic Union Party (PYD) and the People's Protection Units (YPG) in the peace process, the development of a new Syrian constitution, safeguarding the unity of Syria and the formation of the country's future government.

Other issues include whether an amnesty would be applied for all sides in Syria, whether an election in the country will be controlled by the UN mission or by the country's authorities, and the reconstruction of Syria, which may cost up to $1 trillion, Yilmaz continued.

"All this will be discussed in Geneva conference but there is the US on the other side of the table. If there is a convergence of the positions between Russia, the United States, Turkey and Iran there would be a great success on the way to a political settlement," he explained.

The comment comes in the wake of a joint statement adopted by Vladimir Putin, Recep Tayyip Erdogan and Hassan Rouhani following the summit in Sochi, in which the three ceasefire regime guarantors urged to continue de-escalation efforts in Syria in the framework of the Astana process. Commenting on the talks which came just a day after President Bashar Assad's visit to Sochi, Putin said that Syria's collapse has been prevented, while the civil war has almost stopped.

The Turkish politician stressed that the future Syrian National Dialogue Congress, which is likely to gather Syrian opposition and government delegates in Russia's Sochi in December, should include Kurds but that Turkey is sensitive over the issue as it considers some of the groups operating in Syria to be terrorists.

"We are not against the participation of Kurds [in the Syrian National Dialogue Congress], but we have some sensitivities about some groups: PYD, YPG, which have a link with PKK [Kurdistan Workers' Party]. And I think that Kurds' participation is important but who is going to participate from Kurds there, under what umbrella. Thai is also very important," the politician concluded, adding he hopes Russia will accommodate the sensitivities and find an acceptable option.

The Syrian National Dialogue Congress will bring together a number of opposition and pro-governmental forces, as well as representatives of all Syrian ethnic and religious groups to push forward the process of political settlement in the country and address the issues of the future Syrian constitution. The event was initially slated for mid-November but was postponed. A source told Sputnik earlier this week that the Congress might take place on December 2-3 in Sochi.